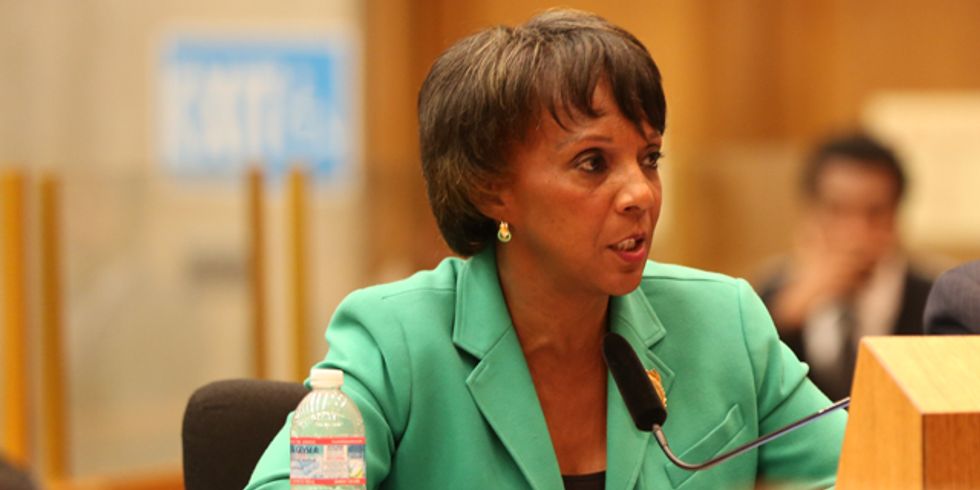 Jackie Lacey, the Los Angeles district attorney, proclaims that she is taking serious steps to treat mentally ill people thrust into the justice system with dignity and respect. ”The criminal justice system needs to better treat people living with mental illness for a wide variety of reasons, as the current system is bad for taxpayers, public safety officers and most importantly, the people struggling with mental health issues,” she wrote in a recent op-ed for The Hill.

It is a convenient statement, given that she prosecutes in a massively liberal district. But digging beneath the surface of her record reveals surprisingly little substance.

Most glaring is the issue Lacey herself highlights. She grants some empathy to “non-violent” people—she founded LA County’s Criminal Justice Mental Health Project, a diversion plan for people with mental illness—but goes out of her way to persecute anyone with a mental illness who commits a violent crime.

It is a symptom of the culture. California’s criminal justice reform project is obsessed with helping only the “Non Non Nons”—those who have committed crimes that are “non-serious,” nonviolent and non-sexual. What’s left is reform for misdemeanors and a bunch of felonies that probably should be misdemeanors.

Pursuing pragmatic politics in a state with America’s richest and most carceral ”victims’ rights” lobby has horrific human costs. Nothing shows that better than a look at Jackie Lacey’s death penalty record.

Lacey has sent 22 people to death row since she took office in December 2012—more than any other DA in the country. Every one of them was a person of color. It is hard to know how many of them may have had serious mental health issues, as nearly half had incompetent lawyers and California death penalty appeals take decades.

But there are signal flares. Prison officials ordered a psychiatric evaluation of Ka Pasasouk, one of the men Lacey sent to death, when he was incarcerated on lower-level offenses. Another, Angel Medoza, was mentally ill, homeless, and had been regularly using PCP and crack cocaine since he was a teenager.

Lacey doesn’t have to do this. Several of her Los Angeles colleagues at the Congressional level don’t limit their push for proportional punishment to only the most sterilized list of crimes. US Representatives Karen Bass, Grace Napolitano and Maxine Waters all signed on as co-sponsors of the Justice is Not for Sale Act of 2017⁠—which would bring back the opportunity of parole for all federal prisoners. People serving life would get a chance at release after 10 years—a provision that makes sense when the vast majority of people age out of crime after their 20s.

Lacey has conceded that most of her constituents do not want her to seek the death penalty. Nonetheless, she plays the card Janet Reno did, as Miami’s State Attorney and then the first woman US Attorney General, from 1993-2001: that the death penalty is legal regardless of personal view, but should be “reserved for a very small number of cases.” But times have changed. These days, reform-minded prosecutors frequently swear off the death penalty altogether.

Even in the area where Lacey can more easily be believed—her claim of a more humane stance toward people who use drugs—she falls short.

Los Angeles didn’t institute the Seattle area’s pioneering pre-arrest diversion program, Law Enforcement Assisted Diversion (LEAD), until 2017—six years later. And while Lacey has cleared old marijuana convictions from her office after Californians voted to legalized it, she only did so after opposing the ballot initiative that made this possible in the first place.

On the other hand, Lacey let Ed Buck, one of her donors, off the hook from any criminal charge after he allegedly injected drugs into reluctant young Black sex workers. Tragically, two of them died. (Buck was then charged by the feds.)

The reality is that DA Lacey represents a Los Angeles that has fallen behind most US cities on making a more humane justice system. Despite her liberal electorate, she is less progressive that the current district attorneys of Philadelphia, Boston, Seattle, San Francisco, Manhattan or Brooklyn.

Her re-electability in 2020 might depend on her ability to raise the bar of what counts as reform—or, sadly, to successfully fake it.