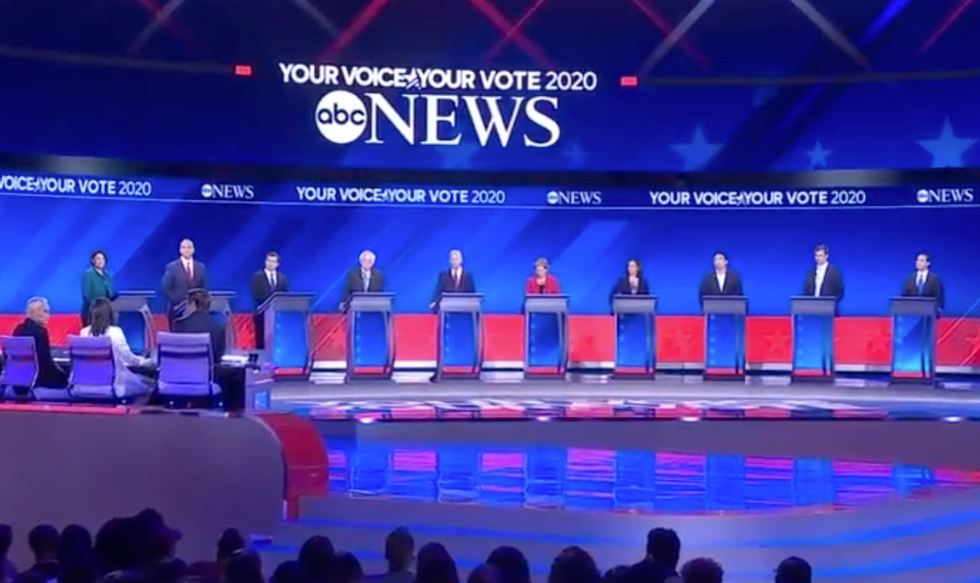 If you tuned into the third Democratic primary debate tonight, you probably watched a different contest than the one I did because we each brought our own beliefs and preferences and subconscious biases to the proceedings. (Polls tend to show that candidates’ supporters tend to think their guys or gals won handily after the fact.)

I thought Elizabeth Warren was accessible and remained on-point, explaining her wonky policy ideas in digestible bites. Bernie Sanders, despite fighting through hoarseness, delivered during the contentious opening arguments over healthcare and deftly went after Joe Biden’s claim that he had voted for the Iraq War resolution because he believed George W. Bush wasn’t itching to invade. I thought Biden embarrassed himself with tonight's performance; he embraced Obama in a bearhug and then distanced himself from the former president's immigration policies. On more than one occasion, I had no idea what he was talking about—notably when he responded to a question about reparations by rambling about people keeping their record players on at night and then pivoting to Venezuela. Kamala Harris, Cory Booker and Julián Castro all had strong nights, in my view, although none had any viral zingers that might be remembered a week from now. I thought Andrew Yang proved he’s not a serious candidate and wondered why Amy Klobuchar was even on the stage.

The moderation was much better than in the second debate, but that was an exceptionally low bar to clear. And it may be that the best moderators in the world would be incapable of making a ten-person debate comprehensible and substantive. As it was, I had a difficult time following some of the exchanges. At other times, I only knew what the candidates were talking or shouting about because I was already familiar with their positions. That it was another muddled debate with candidates constantly talking over one another only made it more of a Rorschach Test.

I took away what I took away. Your read was probably different. It doesn’t really matter what we saw. Most people will be unmoved by the debate itself if they watched it in the first place. What matters is what Chuck Todd and Chris Cillizza and the pundits at The New York Times saw. Their views are just as subjective, their biases just as powerful, but they’ll determine the narrative of the debate--and pronounce winners and losers--over the next 24 hours or so, and that narrative may move some polls. If the conventional wisdom is that Biden looked out of touch and overwhelmed, for example, it could hurt his central argument that he's the best bet to beat Trump.

This is what matters because the primary season may finally be starting in earnest. Historically, early-state polls have only started to have predictive value after Thanksgiving, when most non-political junkies began to tune in and shop for a candidate a couple of months before the first states voted. But that probably won’t be the case this cycle. A poll released by CNN this week found more respondents saying they were “enthusiastic” about voting in this election 13 months out than similar surveys had ever found, at any point in any cycle, dating back to 2003. Like so many things in the Trump era, we appear to be in uncharted territory in this regard. The Summer is over, and it’s possible that less engaged primary voters will start choosing candidates sooner rather than later.

There’s a widespread belief that politicians persuade voters by appealing to their interests or aligning with their ideology or delivering brilliant speeches or snappy rejoinders at debates. There’s a kernel of truth to that—candidates and issues matter at the margins, at least—but most of us select a favorite based on an irrational mishmash of personality traits and the cues we get from the media and others within our social affinity groups, and from the endorsements of various influencers.

Tonight’s debate won’t move the needle, but this early primary race is very fluid. Our takes may not matter much, but if people begin to settle on candidates earlier than usual with Trump on the ticket, the conventional wisdom surely will.