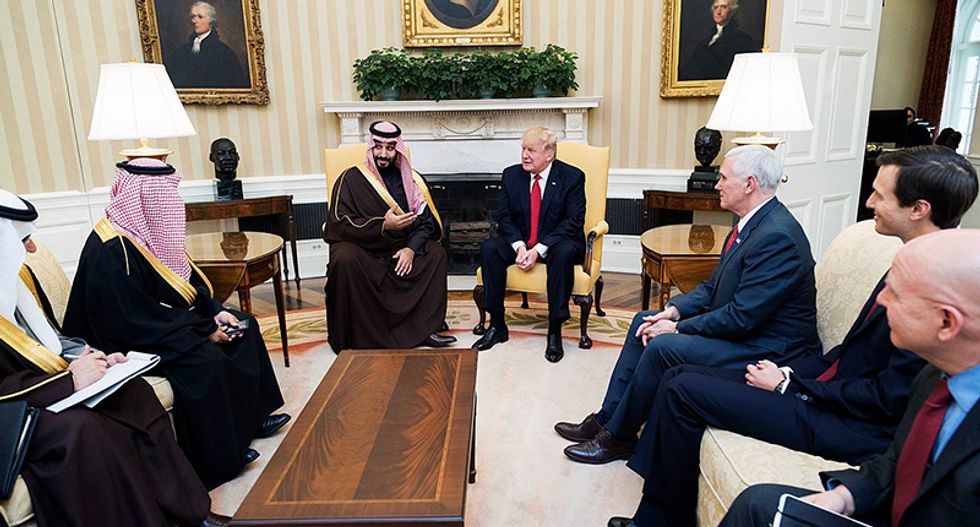 On Saturday, September 14, two oil refineries and other oil infrastructure in Saudi Arabia were hit and set ablaze by 18 drones and 7 cruise missiles, dramatically slashing Saudi Arabia’s oil production by half, from about 10 million to 5 million barrels per day. On September 18, the Trump administration, blaming Iran, announced it was imposing more sanctions on Iran, and voices close to Donald Trump are calling for military action. But this attack should lead to just the opposite response: urgent calls for an immediate end to the war in Yemen and an end to U.S. economic warfare against Iran.

The question of the origin of the attack is still under dispute. The Houthi government in Yemen immediately took responsibility. This is not the first time the Houthis have brought the conflict directly onto Saudi soil as they resist the constant Saudi bombardment of Yemen. Last year, Saudi officials said they had intercepted more than 100 missiles fired from Yemen.

This is, however, the most spectacular and sophisticated attack to date. The Houthis claim they got help from within Saudi Arabia itself, stating that this operation “came after an accurate intelligence operation and advance monitoring and cooperation of honorable and free men within the Kingdom.”

This most likely refers to Shia Saudis in the Eastern Province, where the bulk of Saudi oil facilities are located. Shia Muslims, who make up an estimated 15-20 percent of the population in this Sunni-dominated country, have faced discrimination for decades and have a history of uprisings against the regime. So it is plausible that some members of the Shia community inside the kingdom may have provided intelligence or logistical support for the Houthi attack, or even helped Houthi forces to launch missiles or drones from inside Saudi Arabia.

Secretary of State Mike Pompeo, however, immediately blamed Iran, noting that that the airstrikes hit the west and northwest sides of the oil facilities, not the south side that faces toward Yemen. But Iran is not to the west or northwest either—it is to the northeast. In any case, which part of the facilities was hit does not necessarily have any bearing on which direction the missiles or drones were launched from. Iran strongly denies conducting the attack.

CNN reported that Saudi and U.S. investigators claim “with very high probability” that the attack was launched from an Iranian base in Iran close to the border with Iraq, but that neither the U.S. nor Saudi Arabia has produced any evidence to support these claims.

But in the same report, CNN reported that missile fragments found at the scene appeared to be from Quds-1 missiles, an Iranian model that the Houthis unveiled in July under the slogan, “The Coming Period of Surprises,” and which they may have used in a strike on Abha Airport in southern Saudi Arabia in June.

A Saudi Defense Ministry press briefing on Wednesday, September 18, told the world’s press that the wreckage of missiles based on Iranian designs proves Iranian involvement in the attack, and that the cruise missiles flew from the north, but the Saudis could not yet give details of where they were launched from.

Also on Wednesday, President Trump announced that he has ordered the U.S. Treasury Department to “substantially” increase its sanctions against Iran. But existing U.S. sanctions already place such huge obstacles in the way of Iranian oil exports and imports of food, medicine, and other consumer products that it is hard to imagine what further pain these new sanctions can possibly inflict on the besieged people of Iran.

U.S. allies have been slow to accept the American claims that Iran launched the attack. Japan’s defense minister told reporters “we believe the Houthis carried out the attack based on the statement claiming responsibility.” The United Arab Emirates (UAE) expressed frustration that the U.S. was so quick to point its finger at Iran.

Tragically, this is how U.S. administrations of both parties have responded to such incidents in recent years, seizing any pretext to demonize and threaten their enemies and keep the American public psychologically prepared for war.

If Iran provided the Houthis with weapons or logistical support for this attack, this would represent but a tiny fraction of the bottomless supply of weapons and logistical support that the U.S. and its European allies have provided to Saudi Arabia. In 2018 alone, the Saudi military budget was $67.6 billion, making it the world’s third-highest spender on weapons and military forces after the U.S. and China.

Under the laws of war, the Yemenis are perfectly entitled to defend themselves. That would include striking back at the oil facilities that produce the fuel for Saudi warplanes that have conducted over 17,000 air raids, dropping at least 50,000 mostly U.S.-made bombs and missiles, throughout more than four long years of war on Yemen. The resulting humanitarian crisis also kills a Yemeni child every 10 minutes from preventable diseases, starvation and malnutrition.

The Yemen Data Project has classified nearly a third of the Saudi air strikes as attacks on non-military sites, which ensure that a large proportion of at least 90,000 Yemenis reported killed in the war have been civilians. This makes the Saudi-led air campaign a flagrant and systematic war crime for which Saudi leaders and senior officials of every country in their “coalition” should be held criminally accountable.

That would include President Obama, who led the U.S. into the war in 2015, and President Trump, who has kept the U.S. in this coalition even as its systematic atrocities have been exposed and shocked the whole world.

The Houthis’ newfound ability to strike back at the heart of Saudi Arabia could be a catalyst for peace, if the world can seize this opportunity to convince the Saudis and the Trump administration that their horrific, failed war is not worth the price they will have to pay to keep fighting it. But if we fail to seize this moment, it could instead be the prelude to a much wider war.

So, for the sake of the starving and dying people of Yemen and the people of Iran suffering under the “maximum pressure” of U.S. economic sanctions, as well as the future of our own country and the world, this is a pivotal moment.

If the U.S. military, or Israel or Saudi Arabia, had a viable plan to attack Iran without triggering a wider war, they would have done so long ago. We must tell Trump, Congressional leaders, and all our elected representatives that we reject another war and that we understand how easily any U.S. attack on Iran could quickly spiral into an uncontainable and catastrophic regional or world war.

President Trump has said he is waiting for the Saudis to tell him who they hold responsible for these strikes, effectively placing the U.S. armed forces at the command of Saudi Crown Prince Mohammad bin Salman.

Throughout his presidency, Trump has conducted U.S. foreign policy as a puppet of both Saudi Crown Prince Mohammad bin Salman and Israeli Prime Minister Netanyahu, making a mockery of his “America First” political rhetoric. As Rep. Tulsi Gabbard quipped, “Having our country act as Saudi Arabia’s bitch is not ‘America First.’”

Senator Bernie Sanders has issued a statement that Trump has no authorization from Congress for an attack on Iran, and at least 14 other members of Congress have made similar statements, including his fellow presidential candidates Senator Warren and Congresswoman Gabbard.

Congress already passed a War Powers Resolution to end U.S. complicity in the Saudi-led war on Yemen, but Trump vetoed it. The House has revived the resolution and attached it as an amendment to the FY2020 NDAA military budget bill. If the Senate agrees to keep that provision in the final bill, it will present Trump with a choice between ending the U.S. role in the war in Yemen or vetoing the entire 2020 U.S. military budget.

If Congress successfully reclaims its constitutional authority over the U.S. role in this conflict, it could be a critical turning point in ending the state of permanent war that the U.S. has inflicted on itself and the world since 2001.

If Americans fail to speak out now, we may discover too late that our failure to rein in our venal, warmongering ruling class has led us to the brink of World War III. We hope this crisis will instead awaken the sleeping giant, the too-silent majority of peace-loving Americans, to speak up decisively for peace and force Trump to put the interests and the will of the American people above those of his unscrupulous allies.

Medea Benjamin, co-founder of CODEPINK for Peace, is the author of Inside Iran: The Real History and Politics of the Islamic Republic of Iran and Kingdom of the Unjust: Behind the U.S.-Saudi Connection.