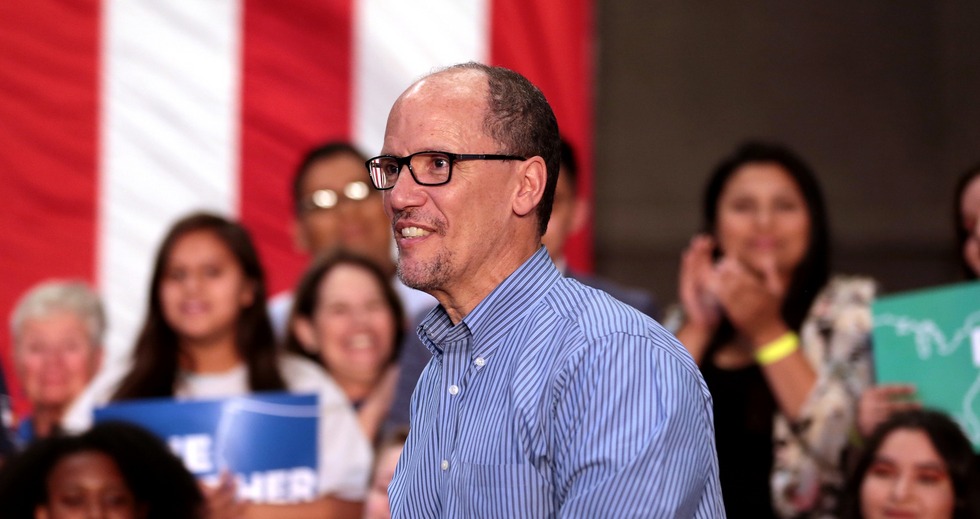 As expected, the prospect of virtual voting in 2020’s Iowa and Nevada Democratic presidential caucuses—using a mix of telephone and online systems—was canceled by the DNC’s Rules and Bylaws Committee (RBC) last Friday, citing cybersecurity issues. State officials were disappointed but will explore other absentee voting options for 2020’s opening caucuses.

But the real news coming out of the RBC meeting was a striking recognition by senior DNC officials that they—the Rules panel and top DNC executives—had underestimated the threats of hacking a new and untested caucus voting system, and the accompanying prospect of propaganda spread online by anyone seeking to undermine the contests’ credibility.

The RBC co-chairs, along with DNC Chairman Tom Perez, concluded that surmounting those challenges was bigger than any single state party’s abilities, said co-chair James Roosevelt Jr. He said that after the 2020 election, the DNC would study if secure virtual voting was feasible—with the DNC possibly building such a system for 2024.

“I have mentioned to the party leadership, from Iowa and Nevada, if this resolution [nixing virtual voting in 2020] is adopted today [it was], I will be working with the DNC leadership following the General Election to undertake a DNC effort with the caucus states to develop a secure system,” said Roosevelt.

The party’s practice of having caucus states entirely manage their own voting systems had to be re-examined if online voting was to be used in an era of complex cybersecurity threats and online disinformation, he said.

“This time the effort was left to the states, because that’s the way the plans are normally developed. We put out the rules. The states develop their implementation mechanism. I think we recognize now that this is bigger than any one state problem,” Roosevelt said. “I am going to urge the DNC leadership to lead this effort following the General Election, so that we have three years… instead of eight months or five months [as in 2019] to deal with it for 2024. I have already discussed that with Chair Perez, and he supports that approach.”

It is unusual for national political parties to backtrack on their plans. Virtual participation would have been the biggest change in Iowa’s caucuses in 50 years. The path that brought the DNC to this turning point began with its post-2016 efforts to unify the party by expanding options to participate in 2020’s caucuses and primaries. Inclusion was a higher priority than facing cybersecurity issues and combating online propaganda, even though Russian-led hacking played a big role with fanning 2016’s divisions within the party.

The inclusion goals were in a 2017 Unity Reform Commission report, whose recommendations were adopted. The Rules panel folded them into its 2020 delegate selection rules adopted last year. Even though the DNC and Hillary Clinton’s campaign had been extensively hacked by Russia—with the stolen documents yielding much fodder for pro-Trump and anti-Clinton messaging—the DNC’s leaders were not focused on this history when seeking to open up absentee voting in 2020’s caucuses.

“The Unity Commission met during the year 2017,” said Elaine Kamarck, an RBC member from Massachusetts, citing this chronology. “In that year, we had an incomplete understanding of the extent and the maliciousness of the Russian attacks on our democracy.”

The party could not take risks with 2020’s first nominating contests, she said after reiterating the targeting by Russia of election infrastructure in all states, its success in breaching one state’s registration database and getting inside other computers in some counties across the country. (This was apart from stealing DNC emails and spreading social media propaganda.)

“Against the backdrop of these extensive malicious interventions, which are still going on by Russia, it is unwise for Iowa or Nevada to attempt to use a telephone system that has never been used and which our tech people have shown is vulnerable to hacking,” Kamarck said. “This does not mean that we are retreating from our goal of greater participation in caucus states… But it does mean that we will have to wait for another day when we have more experience protecting our democracy from malicious actors.”

Other Rules and Bylaws Committee members said threats of online hacking and disinformation were real and should not be dismissed.

“There’s been a lot of focus on Russia,” said Harold Ickes, an RBC member from Washington, D.C. “Russia is not the only bad actor state in this, although a lot of emphasis has been focused on Russia. My wager is that supporters of Trump are as dangerous as Russia, China or other bad actor states.”

Yvette Lewis, an RBC member from Maryland, noted that propaganda against her state’s Black voters started before the 2016 election and has continued.

“We were not in any danger of going red at all” in 2016, she said. “But the Twitter accounts played up racial injustice particularly in the Baltimore area. The tweets continued after the election was over, well into 2017. So just because the election was over, the analysis showed that the tweets continued, and continue to this day. But more importantly, they say the state remains ripe for renewed activity because of the feud between Donald Trump and [Rep.] Elijah Cummings. So they are still moving forward with targeting our state even though we are a reliable blue state. So this is something that we can’t take lightly, because it did not stop just because the election was over.”

“There was a cybersecurity war in 2016 that we have lost,” said Randi Weingarten, an RBC member from New York and American Federation of Teachers president. “And if we’ve made a mistake, it’s that we didn’t understand and recognize it early enough.”

The comments about possible hacking and disinformation obscure to some extent how difficult it is for state Democratic parties, which oversee their presidential caucuses, to stand up entirely new voting systems.

The Rules Committee historically has focused on allocating national convention delegates and ensuring that all delegations reflect their state’s demographics. But this spring, it found itself facing many unprecedented technology issues. (State parties had to submit their 2020 plans by May, leaving the Rules Committee and DNC staff little time to assess them.)

Roosevelt recounted this chronology at the meeting’s opening, saying that he asked the DNC technology staff to step in and evaluate the proposed voting systems from the standpoints of security and reliability. These systems have many elements: from voter registration, to receiving credentials and log-in/passwords by email, to a telephone balloting interface, to the tabulation and reporting system, to a record trail for recounts.

“When we asked the tech team to dig into these plans, they undertook a review that included the following actions: First, reviewing preliminary technical plans, data flow design and vendor contracts in coordination with the Iowa and Nevada Democratic parties. Second, monitoring developments in the overall cybersecurity threat landscape. And third, consulting with security experts with deep experience in cybersecurity systems and/or elections,” Roosevelt said. “Based on the information learned in this process, their recommendation to us and our recommendation to this committee is that there is no tele-caucus system available that is sufficiently secure, reliable and, at scale, to be used given the magnitude and timing of the Iowa and Nevada caucuses this cycle.”

“Obviously, we are disappointed by this recommendation,” said Troy Price, Iowa Democratic Party chair. “We and the folks in Nevada have worked tirelessly over these last few months on this proposal. And virtual caucus represents honestly more than a year of work before it was even proposed.”

“We knew going into this process that security would be a key component to this process, and we have worked with our vendors and potential vendors to make sure that we had security protocols in place,” Price continued. “We still believe that this system can work, and we still have confidence in our vendors and in our process to be able to execute this idea. But, for this process to be successful, it requires the approval of this committee. And if this committee does not share the same confidence that we have, then obviously we cannot go forward.”

“I want to applaud both our state Democratic parties, both Nevada and Iowa, for getting as far as they did without any real tangible guidance from either this committee or the DNC,” said Artie Blanco, an RBC member from Nevada. “We followed the rule and created an entirely new process that fulfilled this requirement back in March of this year. Today, while I agree that there currently does not exist a system for our tele-caucus proposal in the delegate selection plan, even though this was the [caucus planning] process used in 2016, today we find ourselves in a different cybersecurity threat landscape we’re up against.”

What was not said at the RBC meeting was that key parts of both states’ proposed systems were still under development as of early summer. That status meant that there was no end-to-end system for the DNC technology staff to assess—an issue apart from whether it was wise to debut an entirely new voting system in such high-stakes elections.

What happens next is the Rules Committee will meet again within the next two weeks and will take up proposals by Iowa and Nevada for absentee voting in next February’s caucuses.

Nevada was already planning on having early voting centers and at-large precincts in Las Vegas for casino workers. Iowa didn’t have those options because it was avoiding any process that seemed too close to primary, which would infringe on New Hampshire’s first-in-the-nation primary status.

But looking past 2020, the Rules Committee has surfaced a major issue that the DNC’s top leadership has now agreed to confront after the election is over: whether the national party can create a secure way for absentee participation in caucuses using an online technology, or if caucus states must revert to voting by mail or in person at voting centers to expand participation.