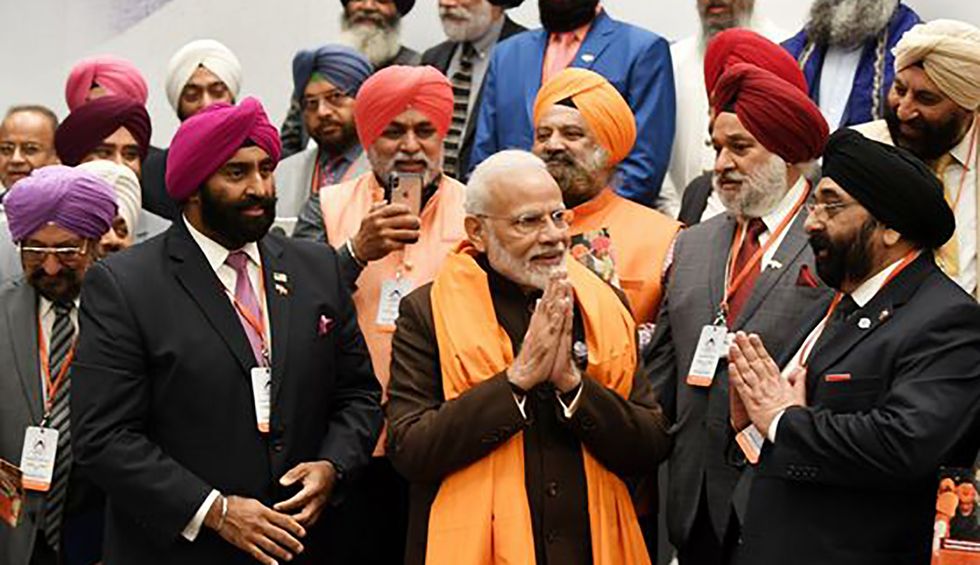 With President Donald Trump as his “warm up act”, India’s Prime Minister Narendra Modi addressed a rally of 50,000 members of the Indian diaspora at Houston’s NRG Stadium on September 22.

Dubbed Howdy, Modi!, the event kicks off a busy week in the US for Modi, with no fewer than 40 meetings to attend. Apart from bilateral talks with Trump, he is due to speak at the UN General Assembly, attend a celebration of the 150th anniversary of Mahatma Gandhi’s birth, and appear at the UN’s Climate Action Summit. Modi will also collect a “global goalkeeper” award from the Bill and Melinda Gates Foundation for his government’s Swachch Bharat or “Clean India” initiative.

It is the Howdy, Modi event that will attract attention, however, and not just because of the praise Modi and Trump heaped upon each other. Few leaders hold these kinds of events when they travel. But Modi has a long history of speaking to gatherings of the Indian diaspora when travelling overseas.

In 2014, after the landslide election win that first brought his government to power, he appeared before a crowd of 18,000 at Madison Square Garden in New York, and then at another gathering, attended by a similar number, at the AllPhones Arena in the Olympic Park in Sydney, Australia. A year later, Modi was joined by his British counterpart David Cameron in front of an estimated 60,000 members of the Indian diaspora at Wembley Stadium in London.

Gatherings like Howdy, Modi are effectively campaign rallies, albeit organised abroad and involving people who, for the most part, cannot vote in India’s elections. They are organised by Modi’s Bharatiya Janata Party (BJP), working with diaspora civil society groups, and not primarily by officials from the local embassies or consulates. They allow Modi to be seen by viewers back home in as positive a light as possible, fêted by an overwhelmingly supportive crowd made up of people whom ordinary Indians would consider savvy and successful. In this way, such events are part of Modi’s broader, ongoing effort to consolidate his position as the most dominant Indian politician of his era.

There is, however, more to these events than just public relations. In recent years, India’s elections have become colossally expensive. In 2014, an estimated US$5 billion was spent by the candidates. In 2019, some estimate that figure grew to at least US$7 billion. Modi’s Hindu nationalist BJP almost certainly accounted for the majority of the spending. Prior to the poll, it had reportedly amassed a considerable war chest.

A sizeable proportion of this money came from big corporations and some from ordinary BJP members and supporters in India. But it’s likely that a significant amount came from the Indian diaspora, despite the fact that many cannot vote in India, either because they are no longer citizens or, if they are, because they were unable to travel back home to cast their ballot, as they must do under current electoral law.

The Delhi High Court found that both the BJP and the opposition Congress Party accepted foreign donations, including from foreign-based companies, prior to the 2014 elections. Since then, the Modi government legislated both to make it harder to trace the sources of campaign financing and to make it easier for foreign individuals and entities to donate money. Rallies such as Howdy, Modi are designed to thank past donors and to solicit future contributions, rather than to appeal for diaspora votes.

These events also serve as instruments of political consolidation. India’s diaspora is as heterogeneous as India. And abroad, people of Indian origin and Indian citizens often coalesce into groups that reflect regional, linguistic, caste and religious identities, as well as national, “Indian” organisations. These sub-national groups help preserve those identities, but arguably also weaken the diaspora as a political force. Forging India lobbies in places such as the US that might influence governments on New Delhi’s behalf is hard under such circumstances.

The BJP uses events like Howdy, Modi to try to address that problem, as a focal point around which various smaller groups can gather. The prime minister’s Twitter feed made that clear, posting video of Modi meeting the representatives of particular communities, such as the Shia Muslim Dawoodi Bohras, the Kashmiri Pandits, and local Sikhs. It is telling too that the organisers managed to attract sponsorship for Howdy, Modi from more than six hundred diaspora groups from across the US.

Since 2014, the Indian diaspora has been one of Modi’s biggest supporters, politically and financially. Whether this backing will persist through his second term will be a key test. As India’s economy began to falter in 2017, some thought that the diaspora would grow disillusioned, and withdraw their backing. During the recent election campaign, however, there were no signs of a mass defection from the cause, with diaspora Indians continuing to contribute time as well as money to ensure Modi’s BJP were returned to office.