Who would win the Democratic primary today with ranked choice voting? 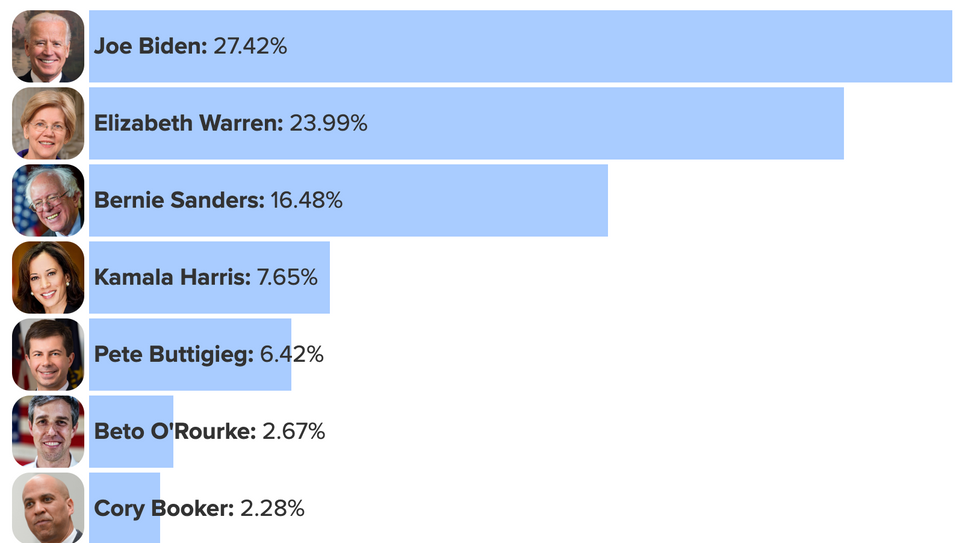 The topline numbers on the endless surveys that the pollsters conduct these days don't tell us much about what will happen next year because many voters aren't yet paying close attention and those same polls find that most of those who are tuned in haven't settled on a candidate. When you see a poll showing that 25 percent of voters support Candidate X, what it really tells you is that one-in-four are leaning that way and pick Candidate X when pressed to name their top choice. Surveys consistently find that this far out, a majority of voters are either considering more than one candidate or are still open to persuasion.

Morning Consult has been asking people about their second choices for the nomination, which helps us understand who a candidate's supporters might move toward if that candidate stumbles. But that data is limited as they only release the second choices of those who support the top-tier candidates.

But earlier this month, FairVote teamed up with YouGov to figure out where the primary race would stand today if the Democratic Party used Ranked Choice Voting (RCV),  also known as Instant Runoff Voting. In a nutshell, instead of choosing one favorite candidate, in an RCV system voters rank the candidates according to their preferences. Then the candidates who are picked as a first choice by the smallest share of voters get knocked out, and their supporters' second (and third and so on) choices are tallied up, and this process continues until you get a winner. (I explained this in more detail here.)

You can interact with the data for the full Democratic field here in case you're wondering who would benefit from, say Tulsi Gabbard or Tom Steyer dropping out.

For me, the top tier candidates are more interesting. Here's what happens as each of the bottom three are knocked out of the race...

Joe Biden would be the biggest beneficiary of Buttigieg dropping out.

Kamala Harris's departure would help Warren the most.

And Sen. Warren would win in this scenario. Which is yet another data-point suggesting that Joe Biden's early frontrunner status isn't all that it's cracked up to be.

And if we shake things up within the final three and eliminate Warren instead of Sen. Bernie Sanders?