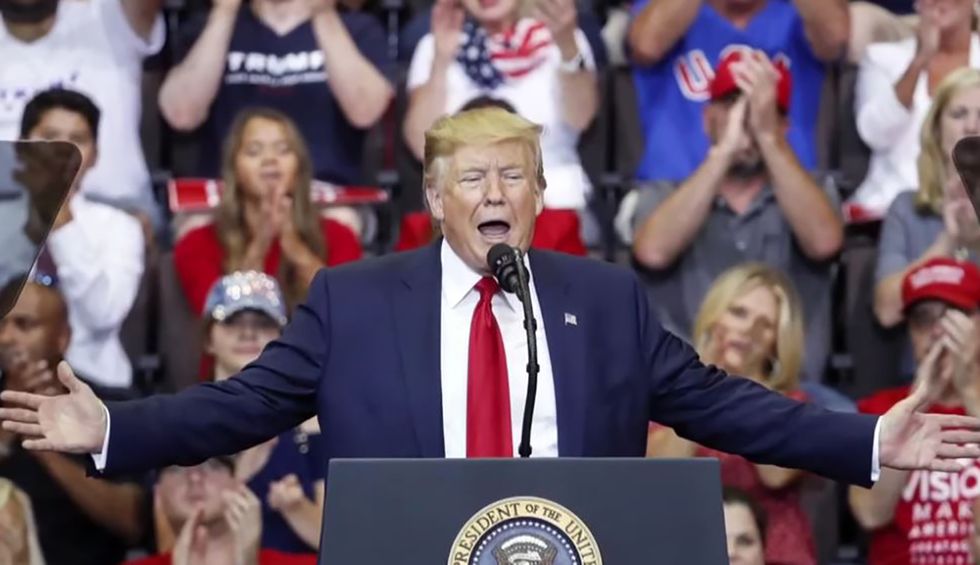 We clearly must be living in the End Times, just as all those street-corner prophets have been trying to tell us, because there is no way the news can get much more crazy than this before human civilization collapses completely.

Let's go through this, as outlined by The Washington Post. The Trump White House desperately wants to be seen as taking action on mass shootings but cannot do anything to actually address all the guns because Trump is a coward. What to do? Ivanka is privately concerned, the whole works.

Fear not, says (checking notes) former NBC chairman Bob Wright, a longtime Trump pal. In response to a query from the privately concerned Ivanka as to whether something could be done about all these murders, Wright's "advisers" write up a three-page proposal for a new program to research whether we can monitor Americans' "phones and smart watches" to see which of them is "about to" become violent.

It is called, shityounot, Stopping Aberrant Fatal Events by Helping Overcome Mental Extremes, or SAFEHOME. And the former NBC executive is apparently pushing this, as part of his devoted promotion of a new "HARPA" government agency for promoting cutting-edge medical research, a drive he began after his wife died of pancreatic cancer.

And maybe the violence-monitoring will use artificial intelligence or something, we don't know. Much of the rest of the Post's story is devoted to a back-and-forth between backers and actual experts fairly screaming about the already-researched futility of attempting to "predict" violence via biometric means.

So to sum up: A former NBC executive and Trump ally proposes the government monitor American phones and smartwatches to see which heavily armed malcontent is maybe just about to pop off, perhaps using blood pressure data or fabric swatches or how close you are to an abandoned cheese factory or whatever. Upon which the government will, in this bright new future, swoop in and stop them from doing it. Unless the government and its new technology gets it wrong, which it absolutely certainly will.

This seems uncomfortably close to a whole host of dystopian movies and novels, doesn't it?

From the person-by-person government surveillance to an omnipresent but poorly explained technological advance to the rather bizarre inclusion of a powerful entertainment executive as mastermind after the U.S. president's daughter asked him for murder-stopping ideas, it’s all very Orwellian.

I mean, okay. Whatever. It's less bizarre than a U.S. president hand-drawing lines on official government weather maps to make it look like a hurricane was headed somewhere it wasn't. But while this feels like something that should be funny, it just isn't. It isn't. The absolute refusal to do anything to limit how much murder any random angry American can inflict in the shortest possible time, simply because they have the desire to, continues to lead us down ridiculous paths in which we develop "bulletproof" child backpacks, redesign school corridors so kids can hide from shooters more successfully, equip our police departments with armed personnel carriers, and suggest monitoring smartwatches for signs that someone is contemplating mass murder.

Because as long as each political hack can say they're supporting something like this implausible, fluffy technodream, they can pretend that they are doing "something" about our now-daily mass murders while not lifting an actual, real-world finger to do it.