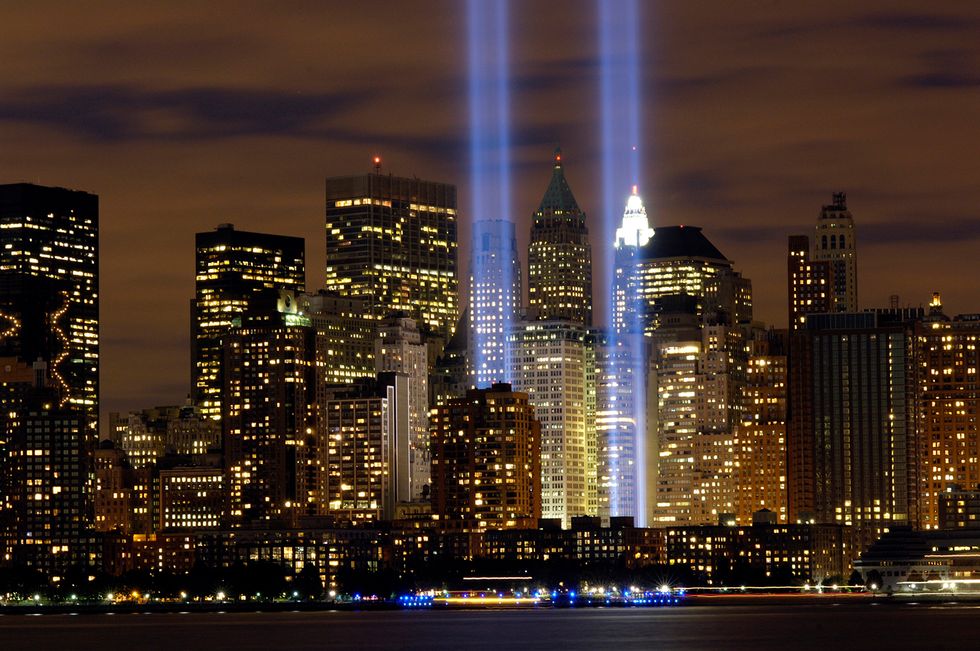 The "Tribute in Light" memorial is in remembrance of the events of Sept. 11, 2001. The two towers of light are composed of two banks of high wattage spotlights that point straight up from a lot next to Ground Zero. This photo was taken from Liberty State Park, N.J., Sept. 11, the five-year anniversary of 9/11. (U.S. Air Force photo/Denise Gould)
Amanda Marcotte
and
Salon
September 11, 2019

Eighteen years after the events of Sept. 11, 2001, one thing is quite clear: We forgot.

On a daily basis, then a weekly, and now just annually, we repeated the mantra of "We will never forget." It has lost whatever meaning it once had, to the point where, of course, it's being used as a branding opportunity by Donald Trump.

But the very fact that Trump is in the White House, tweeting out such pablum, is crystalline evidence that we've given up all hope of learning a lesson from the horror show of watching the World Trade Center smash into the ground, taking 2,753 human lives with it, as well as the hundreds who died at the Pentagon or in the plane crashes — and the thousands who died from diseases caused by the pollution.

Osama bin Laden, who was killed by U.S troops during Barack Obama's presidency, didn't live to see Trump win the presidency, so it's impossible to know for sure how he'd have reacted. But insofar as one major goal of al-Qaida was to expose the United States as a paper tiger, the election of Trump was a huge victory for those terrorists we swore would not be allowed to win.

The terrorist leader wanted the world to see the U.S. the way he saw it: Mean, hateful, small-minded and cruel. Well, as George W. Bush liked to say, mission accomplished.

To be certain, forgetting the lessons of 9/11 began before the dust had settled in downtown Manhattan, in no small part because the Bush administration aggressively moved to confuse Americans about what the hell had just happened to us. Bin Laden's opposition to American military aggression was concealed by an endless stream of bromides about "freedom" (always poorly defined), lest the American public — which tends to be skeptical about military interventionism — should turn against Bush's pre-existing and secret plans to invade Iraq, a country that had nothing to do with al-Qaida or the 9/11 attacks.

If there was one thing that Bush did right, however, it was to tamp down American bigotry towards Muslims, or at least try to. Bush himself said, "Islam, as practiced by the vast majority of people, is a peaceful religion, a religion that respects others," and also, "Ours is a country based upon tolerance and we welcome people of all faiths in America."

After all, al-Qaida — and then ISIS — recruited new members by painting Americans as intolerant, anti-Muslim bigots who cannot be lived with in peace. Bush's rhetoric was an attempt to counter that message, though ultimately, such efforts were overshadowed by the pointless, endless and immensely destructive wars he launched in Iraq and Afghanistan.

But even Bush's gestures toward tolerance have been vigorously stomped on by Trump, a lying bigot who ranks Muslims up there with Latinos in the hierarchy of people he hates. Unsurprisingly, Trump's campaign and presidency have coincided with a startling rise in hate crimes, including those against Muslims or people perceived as Muslims. This certainly suits a goal that many terrorism experts believe was motivating bin Laden: to cause Americans and other Westerners to lash out at Muslims as a group, generating propaganda that terrorist organizations could use to recruit.

Hate crimes against Jews are also on the rise, which could be regarded as another win for bin Laden, who of course hated Israel and the Jewish people.

Beyond bin Laden's victory in escalating global tensions and exposing the U.S. as fools before the world, Trump's election also scored points for al-Qaida, in its war against perceived Western iniquity. In his letter to America, bin Laden railed against the "immorality and debauchery that has spread among you," castigating Americans for "fornication" and "homosexuality."

Instead of continuing to tell fundamentalist bigots where to shove it, the U.S. went ahead and elected Trump, who has methodically proceeded down the wish list of action items for American fundamentalists. Homegrown religious fanatics may not like the book that bin Laden worshipped, but they sure as hell share his opinions on sexuality. Trump feels no compunction about ignoring the rigid sexual rules his followers want to inflict on the rest of us, of course, but his unwavering devotion to patriarchy is something bin Laden himself might grudgingly admire, if he were still around to see it.

It's a real tragedy, because, for a time, it really did seem that Americans had learned the lessons of 9/11. While Obama was far from perfect as president — he fell far short of his lofty goal of curtailing human rights abuses in the name of American imperialism — the mere fact that he was elected really did mean something.

It may be hard to remember this now, but for a brief, shining moment in 2008 and 2009, Americans felt able to reassure the world that we were, in fact, good people. Obama himself was less important than what he symbolized, which was a broad rejection of the politics of hate and an embrace of the best part of ourselves, the part that is open-minded, gracious and welcoming. We rejected fundamentalism and embraced pluralism. We would not let Osama bin Laden win.

I don't know how that got squandered so badly. I can remember all the steps along the way — Obama's failures, the GOP's largely successful efforts to kneecap him, the economic crisis that wiped away all other concerns, the Tea Party and the growing forces of racist reaction in the U.S., the rise of a surprisingly robust secular anti-feminist movement, the growing liberal complacency that caused voters not to treat Trump as a real threat — yet it still seems baffling to me. We promised ourselves we would never forget. And holy crap, we forgot.

It's genuinely difficult to turn on the TV or engage with any remembrances of 9/11, and not just because it's always been gross how much commercialized sentimentality has replaced any real understanding of what happened that day, let alone of the failed wars and political chaos that followed

It's also because I fear we learned nothing.

The U.S. had a real opportunity, for a time, to take the right lessons from 9/11, and to turn ourselves into the country that deserved all the sympathy and warm wishes we got from around the world in the wake of that tragedy. With Donald Trump as our president, we've turned our nation into a joke and spit in the face of everyone who wished us well. It's a tragedy so grand in scale that it will only be visible in its full breadth from a historical distance.

Trump has been successful at imposing a hateful, alienating, authoritarian politics on our nation, in a fashion that's likely beyond Osama bin Laden's wildest dreams of destroying America. Let's hope it's not too late to claw back this horrific turn of events and avoid what we swore we'd never do: Let the terrorists win.