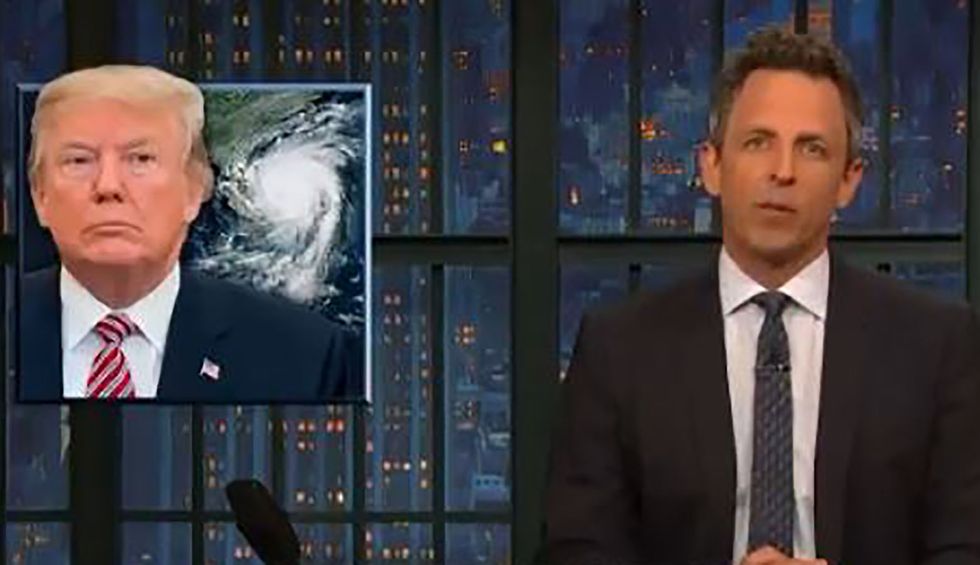 President Donald Trump was ridiculed by late-night comics on Tuesday as they returned to the airwaves after the Labor Day holiday.

One common theme in the jabs was Trump’s cluelessness about Hurricane Dorian.

Trump spent the long weekend golfing as the storm approached.

When not playing golf, Trump got in a public fight with the National Weather Service over his false claim that Hurricane Dorian threatened Alabama — and lashed out at the press for correctly reporting what he had said.

In fact, according to a prominent Republican strategist, Trump has a long history of natural disaster, “f*ck-ups.”

This approach to managing disasters provided a great deal of fodder for comedians.

“Now the storm is hovering off the coast of the United States,” he said. “No one is sure if it is going to make landfall, or where. And by no one, I mean, Donald Trump.”

Colbert wondered if Trump needed louder tweets so people could hear them over the sound of the storm.

Seth Meyers focused on Trump being caught playing golf while the storm approached.

Though the comedian suggested that might be better than him monitoring the storm.

Trevor Noah, the host of ‘The Daily Show,’ focused on Trump’s cluelessness about Category 5 storms.

“So, Hurricane Dorian has slammed into the Bahamas and now it is headed towards the U.S.,” Noah said. “The good news is President Trump has a lot of experience handling hurricanes of this magnitude. The bad news is, he doesn’t remember any of his experience.”

The host played a clip of Trump saying he hadn’t heard of a Category 5 storm, despite having been president for four of them.