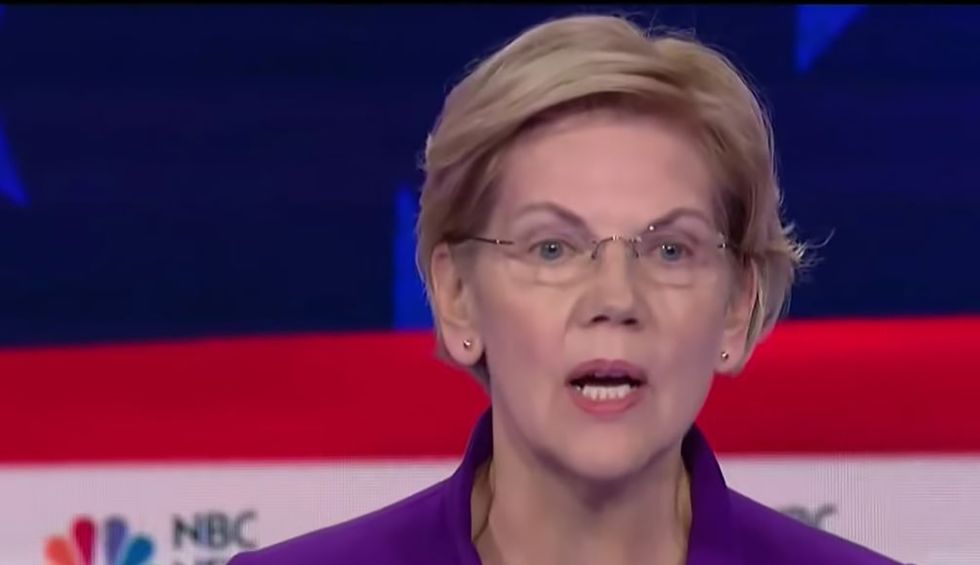 Declaring the climate emergency an "existential crisis" that requires bold and urgent action, Sen. Elizabeth Warren Tuesday night unveiled a proposal that calls for repealing President Donald Trump's tax cuts for the rich and corporations to help fund a transition to 100 percent renewable energy by 2035.

Warren's plan adopts and builds upon the clean energy blueprint introduced by Washington Gov. Jay Inslee, who dropped out of the 2020 Democratic presidential primary race last month after running a campaign that centered the climate crisis as the most dire issue facing the U.S. and the world.
"Jay didn't merely sound the alarm or make vague promises. He provided bold, thoughtful, and detailed ideas for how to get us where we need to go," Warren wrote in a Medium post. "One of the most important of these ideas is the urgent need to decarbonize key sectors of our economy. Today, I'm embracing that goal."

Warren said she will "commit an additional $1 trillion over 10 years — fully paid for by reversing Trump's tax cuts for the wealthiest individuals and giant corporations — to match Governor Inslee's commitment, and to subsidize the economic transition to clean and renewable electricity, zero emission vehicles, and green products for commercial and residential buildings."

The senator outlined the broad goals of her clean energy plan, which calls for $3 trillion in federal investment:

"Nothing less than a national mobilization will be required to defeat climate change," said Warren. "It will require every single one of us, and it's time to roll up our sleeves and get to work — there is no time to waste."

Warren's clean energy plan was unveiled Tuesday as part of the Massachusetts senator's overall climate platform, which is detailed on her website.

Warren, an original co-sponsor of the Senate Green New Deal resolution, said her platform would aim to ensure a just transition for fossil fuel industry workers, bolster protections for frontline communities, and create millions of well-paying union jobs while confronting the climate crisis.

"If we work together to make smart investments in our clean energy future, we will grow our economy, improve our health, and reduce structural inequalities embedded in our existing fossil fuel system," Warren wrote. "The task before us is monumental, and it is urgent."

In a statement on Tuesday, Mitch Jones, climate and energy program director at Food & Water Watch, applauded Warren's clean energy plan as a "welcome" addition to her slate of climate proposals.

But Jones criticized Warren for neglecting to mention fracking, which is largely responsible for the planet-threatening boom in U.S. natural gas production.

"While Senator Warren came out early in support of previous plans to stop fossil fuel production on public lands, this latest proposal is silent on banning fracking everywhere," said Jones. "Our new fossil fuel exporting economy is based on fracking, without banning it or exports of fossil fuels, we are condemning our children to decades of fossil fuel use."

"We must move immediately to ban fracking, ban the export and import of fossil fuels, ban new fossil fuel infrastructure including pipelines, as well as banning production on public lands," Jones added. "We don't have time to wait. Acting now is both a political and moral imperative."