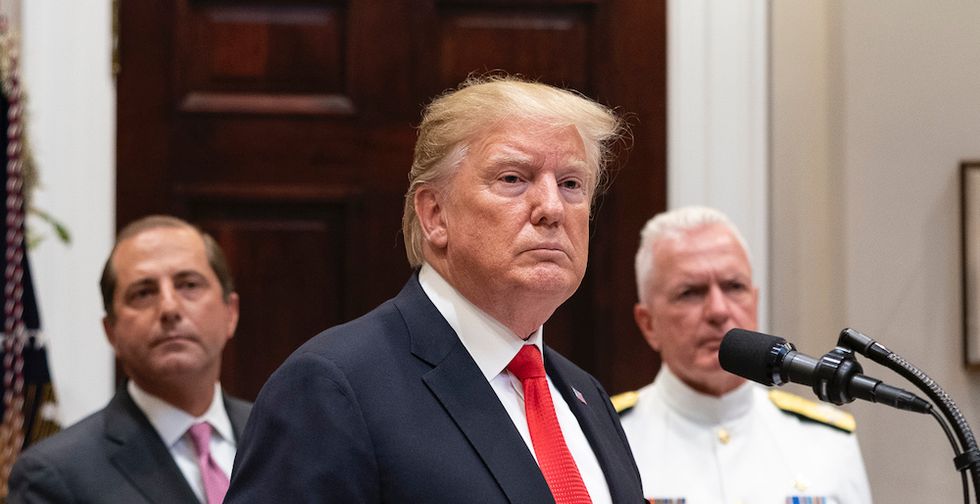 The Census Bureau concurs with Gallup, the Congressional Budget Office, and the Centers for Disease Control: The number of people in the U.S. without insurance has grown, a reversal from when the Affordable Care Act was enacted. And that's down at least in part to Trump's sabotage.

According to the latest census report, about 8.5% of the population under 65, or around 27.5 million people, were uninsured in 2018. That's up from 7.9% in 2017. This happened while the economy continued to do well. The census also found that the share of Americans living in poverty decreased to the lowest level since 2001. It's the ending of the individual mandate requiring people to carry insurance, and it's states like Kentucky and Arkansas kicking people out of expanded Medicaid. More than 1.6 million people lost Medicaid and Children's Health Insurance Program coverage last year.

It's Trump and Republican policies, in part, too. "In a period of continued economic growth, continued job growth, you would certainly hope that you wouldn't be going backwards when it comes to insurance coverage," Sharon Parrott, senior vice president at the liberal Center on Budget and Policy Priorities, told The New York Times. The sabotage from the administration encompassed everything from basically ending advertising and outreach to inform and assist people in getting health insurance to ending critical subsidies to help people afford care.

Republicans couldn't get repeal done, and they couldn't do that because they can't come to any kind of consensus on replacing the ACA. That's ultimately because they don't care. The only lives they care about are unborn ones. Everyone else can just die without health care or in a spray of bullets from an assault weapon as far as they're concerned.