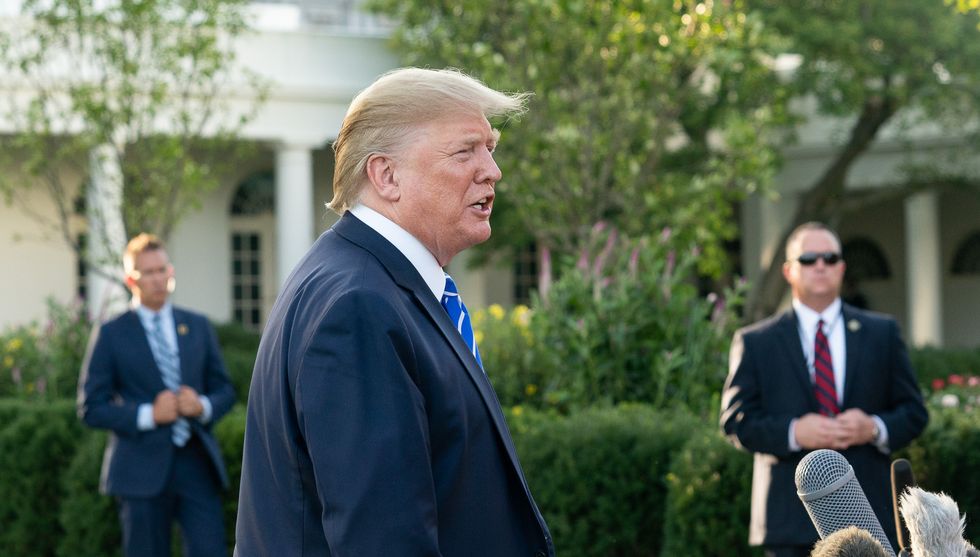 President Donald J. Trump talks to members of the press on the South Lawn of the White House Friday, Aug. 30, 2019, prior to boarding Marine One to begin his trip to Camp David near Thurmont, Md. (Official White House Photo by Joyce N. Boghosian)
Kerry Eleveld
and
Daily Kos
September 04, 2019 Election '20

Yes, it's too early to tell much from head-to-head polling, anything can happen, Democrats can't get too comfortable, and all the other requisite caveats assumed. That said, CNN's Harry Enten examined pre-election polling extending all the way back to World War II and found that "no incumbent president has ever polled this poorly against his likely challengers at this point in the campaign."

The latest Quinnipiac poll has Trump losing to all five of his most likely Democratic challengers by nine points or more, and Trump trailed Biden by fully 16 points in the survey. Enten noted that it was the second probability test in August that showed Trump losing to all five Democratic frontrunners by at least 5 points. The Fox News pollthat Trump publicly blasted was the other. And averaging all the August head to heads together put Biden up by 10 points against Trump, 49% to 39%.

Compared to previous presidents, Trump is sucking wind. In the past, most incumbent presidents were headed into the final year of the campaign with a decisive advantage. In fact, nine of the 11 incumbents not only led their eventual opponent, on average they were beating that candidate by 12 points.

Trump has not bested Biden in one single national poll since he entered the race.

The two incumbents who were trailing their opponents at this point in the cycle were doing so by much less: Jimmy Carter was down 4 points in 1979 and Barack Obama at a 1-point deficit in 2011.

That means that Trump is polling worse than any incumbent president since WWII against all five of his potential Democratic rivals. Just one more instance where Trump outshines everyone as the absolute worst.