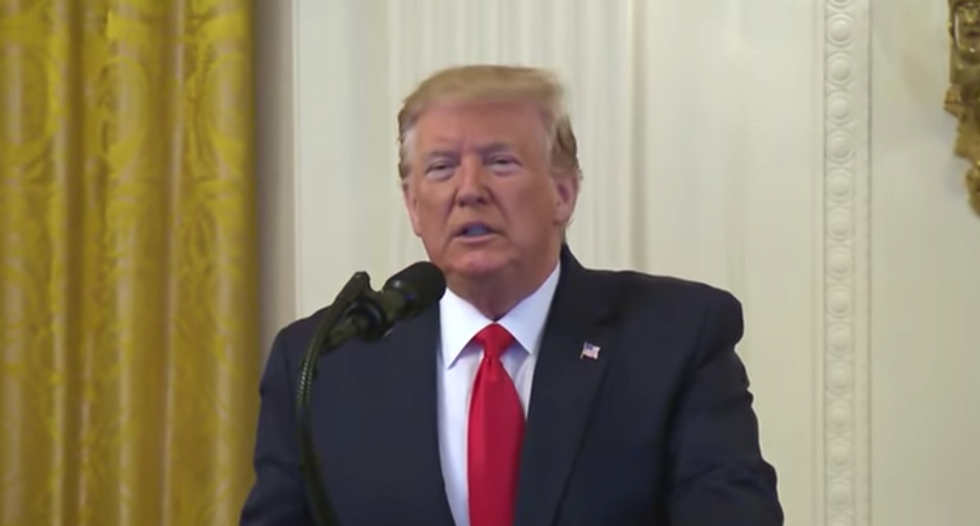 In another spectacular failure to vet anyone, ever, the White House ceremony for heroes of mass shootings featured Donald Trump honoring a man who made up a story about his own heroism … and who wasn’t at the ceremony because he’d been detained by the Secret Service due to an open arrest warrant.

Trump repeated a story that Chris Grant told on CNN in early August, but that the El Paso police say simply isn’t true. As Trump told it, before handing a commendation to Grant’s mother on account of his being detained at the time, “Chris grabbed—listen to this—soda bottles and anything else in front of him, and began hurling them at the gunman, distracting him from the other shoppers and causing the shooter to turn toward Chris and fire at Chris, whereby Chris suffered two very serious gunshot wounds.”

According to the El Paso police, “The video evidence of the scene does not support his [Grant’s] assertions. His actions were captured by surveillance cameras, but they amount to an act of self-preservation, nothing more, nothing less.” It’s not that Grant did anything wrong during the shooting, it’s that when he made himself out to be a hero, he lied. And the Trump White House grabbed onto that lie and elevated it, without doing the least bit of fact-checking to find out if it was true.

”Nobody bothered to check with us,” El Paso Police Sgt. Enrique Carrillo told the Washington Examiner. “They would have been informed, as I am telling you now, that our detectives reviewed hours of video and his actions did not match his account.”

”Nobody bothered to check with us” is pretty much how vetting works in this White House.