Trump ominously warns that the dangerous John Bolton was actually 'holding me back!' 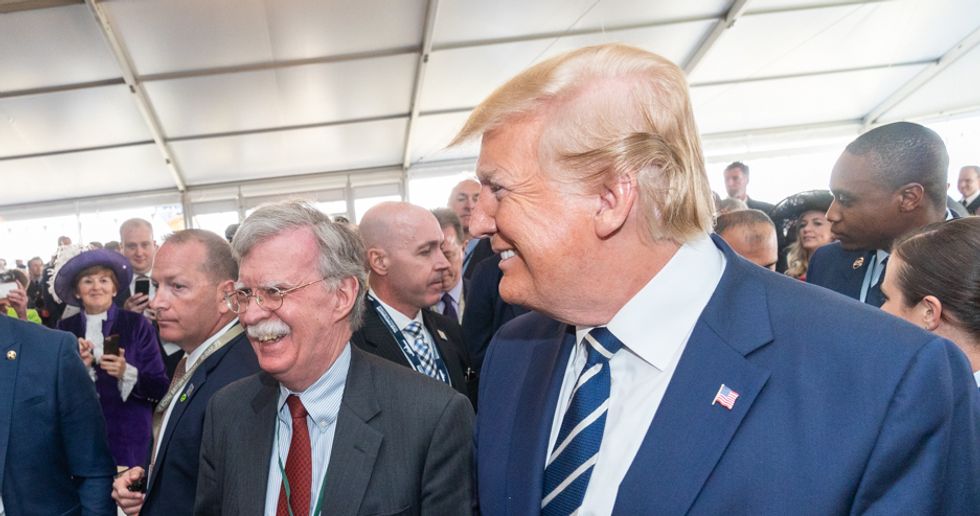 With the ouster of National Security Adviser John Bolton, many of the president's allies and even some of his critics cheered the news as a sign that, as many have hoped, Donald Trump really is a foreign policy dove at his core. Bolton infamously loves military force as a first resort, advocated for the Iraq War under President George W. Bush, and has been clearly itching for conflicts with both Iran and North Korea in recent years.

But Trump himself on Thursday apparently hoped to put a stop to the idea that without Bolton he'll be less inclined toward aggressive foreign policy. Sen. Marco Rubio (R-FL), who has been particularly hostile to the Venezuelan authoritarian Nicolás Maduro, said on Twitter in the afternoon that the conventional wisdom is wrong in a key respect. Without Bolton, Trump is likely to take a more forceful approach against Maduro.

In the spring, the Trump administration backed a potential coup against Maduro from challenger Juan Guaidó. For months prior, the administration and some on the right wing had been sounding increasingly threatening toward Venezuela, and many even feared the U.S. might actively support a conflict in the country. But the coup fizzled out, and the Washington Post reported:

A frustrated Trump believed that national security adviser John Bolton and his director for Latin American policy, Mauricio Claver-Carone, “got played” by both the opposition and key Maduro officials, two senior administration officials said. As the president “chewed out the staff” in a meeting shortly after the April 30 failure, in the words of one former Trump official involved in Venezuela policy, he mused that he might need to get on the phone himself to get something done.

Summer arrives this week with Maduro still in place, and little indication that he is imminently on his way out, or that the Trump administration has a coherent strategy to remove him. The president, officials said, is losing both patience and interest in Venezuela.

It's far from clear that Trump has the focus, patience, or resolve to actually construct a newly aggressive approach to Venezuela and actually topple the Maduro regime, which has proved more resilient than some had hoped. But as I noted in a piece about a dispute between Rep. Liz Cheney (R-WY) and Sen. Rand Paul (R-KY), Trump has a tendency to try to please multiple sides of a disagreement, even if it forces him to talk out of both sides of his mouth. He may have just been telling Rubio what he wants to hear.

Adding that his views on "especially Cuba" are "far stronger" than Bolton's also suggests that Trump is keeping the electoral calculus in mind. Opposition to Cuba has long been a powerfully motivating sentiment in the Republican politics of Florida, a key state for the president in 2020.

But aside from Thursday's tweet, Trump is sending clear signals that without John Bolton, policy toward Iran and North Korea may be increasingly permissive. On Wednesday, he had publicly said that the North Korean government was actively hostile to Bolton, and the Daily Beast reported that Trump is considering giving Iran $15 billion to entice it into complying with the nuclear deal the president has abandoned — an idea that would have been anathema to his ex-national security adviser. With Bolton gone, Iran and North Korea should both be feeling the wind at their backs.

Should Venezuela and Cuba actually be concerned that the president is going to become more hawkish toward them with Bolton? It's not clear, but he certainly wants them and us to think so.