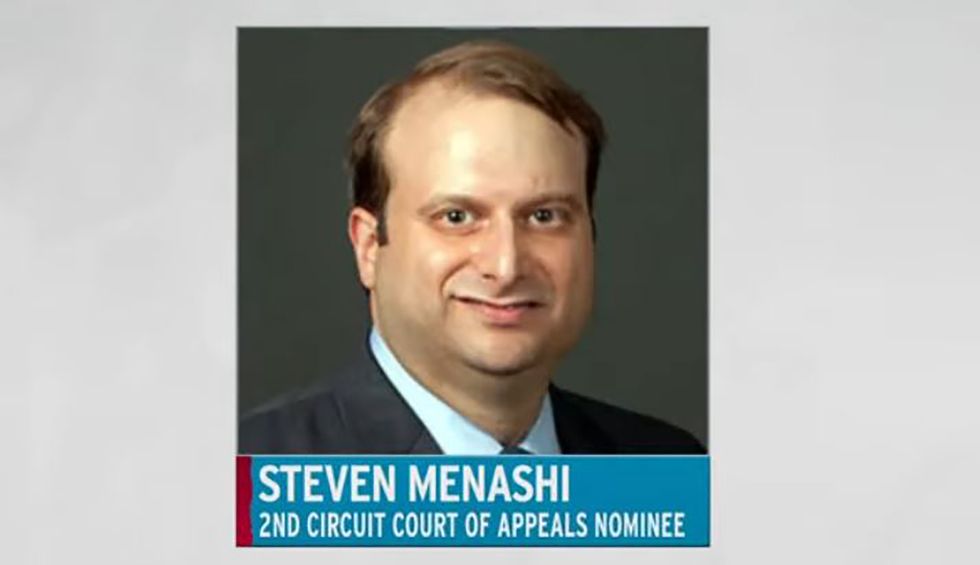 Steven Menashi, a current Trump White House legal adviser who works with Stephen Miller's immigration working group and is Education Secretary Betsy DeVos' right-hand man, seemed to be a shoo-in for a lifetime appointment to the federal judiciary. Because the Republican Senate would confirm a ham sandwich.

Unfortunately for Menashi, he's not a ham sandwich. He's an arrogant asshole who refused to answer even Republican members' questions in his confirmation hearing last week. Even Sen. Lindsey Graham, Trump's wannabe BFF, had issues with Menashi's refusal to answer questions, jumping in during questioning by Democratic Sen. Dick Durbin to try to make Menashi answer whether he worked on "the administration's decision to end deferred deportation for undocumented immigrants who are receiving treatment for life-threatening illnesses." Graham told Menashi "That's not an unfair question. […] It's a specific question. Did you give legal advice on the subject matter?"

Menashi finally conceded he "may" have worked on it, but couldn't recall. It got to a point where he was chided by Republican senators for refusing to cooperate. "This isn't supposed to be a game," Sen. John Kennedy of Louisiana told him. "We're supposed to try to understand not how you're going to rule but how you’re going to think."

Now Kennedy is saying it's "doubtful" he'll vote for Menashi when/if he comes up for a committee vote. Saying he was "very annoyed" by Menashi's performance, Kennedy told HuffPost’s Jennifer Bendery "I don't know enough about him to be able to say he'd be a good judge. And that was the whole point of having a hearing. […] I'm tired of it. He should answer the questions."

This defection would be a really good excuse for Graham to convince the White House to pull the nomination. Menashi is so bad that even Susan Collins would have a really hard time voting for him. He's got a history of publishing rabidly sexist and anti-gay writings and statements, and has defended racists and spread Islamaphobic myths. So it might be easier all around if the nomination just goes away. But it's worth noting that all of these nightmarish things he's done and said aren't about to disqualify him in Republicans' minds; it's because he wasn't adequately deferential to them in his hearing. Whatever it takes.