The world is on fire. Trump and his cronies are fanning the flames. 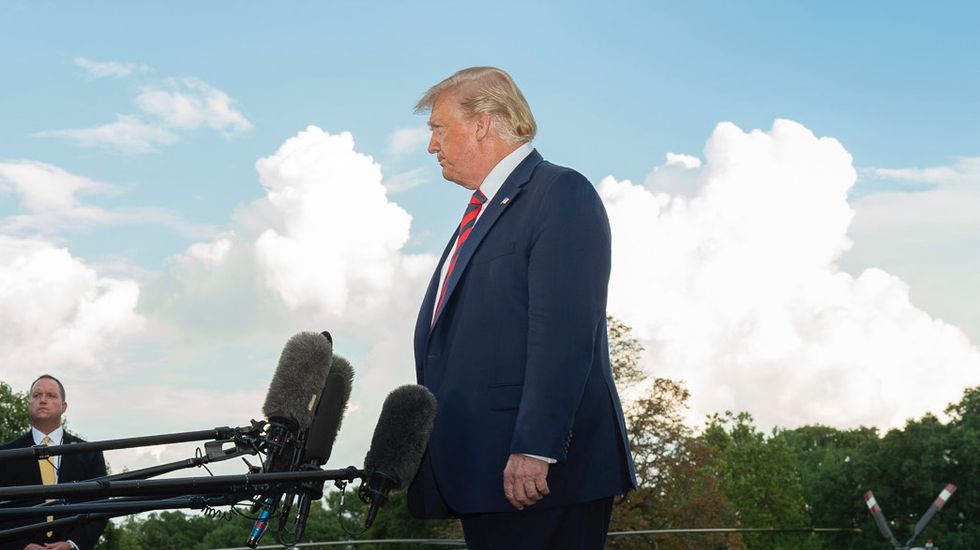 President Donald J. Trump talks to members of the press on the South Lawn of the White House Thursday, Sept. 12, 2019, prior to boarding Marine One en route to Baltimore, Md where he will give remarks at the 2019 House Republican Conference Member Retreat Dinner. (Official White House Photo by Shealah Craighead)
Jim Hightower
and
Creators Syndicate
September 18, 2019 World

For millions of people around the globe -- especially young people -- the pressing issue of our time is this: The world is on fire! On fire with climate change, creating a new and intensifying norm of deadly weather extremes that make a dystopian future a distinct possibility -- constant wildfires, rising seas, desertification, global crop failures, widespread hunger, water shortages, etc.

Luckily, we are a sentient species with the scientific ability to know that the chief cause of this global destruction is not angry gods but us -- specifically humankind's massive extraction and burning of oil, gas, coal and other fossil fuels. So there's a rising chorus of people shouting, "FIRE!" And sure enough, our national government is rushing to the scene to put it out. Unfortunately, our president and his crew of right-wing fire-breathers in Congress are not directing the government's hoses at the corporate extractors but at us -- the people, scientists, environmentalists and other activists who've dared to point to the flames and call for global action to stop the conflagration. They seem to think that the problem will go away if they can pretend it doesn't exist -- and that if they just ignore us protesters, we'll go away, too.

Worse, the Trumpsters are fanning the flames by turning the EPA into the PPA -- the Polluters Protection Agency. Rather than fighting climate change, they're going all out to coddle the drillers, strip miners, frackers, pipeliners, refiners, exporters and other fossil fuel profiteers by slashing the dozens of public restraints that We the People have put on the climate polluters' rapacious greed. For example, this month, Trump & Co. is trying to throw out rules that protect neighbors who live near Big Oil's facilities from being poisoned by toxic methane emissions, which also are potent causes of global warming. Also, at a time when the U.S. should be taking the economic, environmental and moral lead in phasing out fossil fuel production, Trump & Co. is opening up vast regions of our oceans and wilderness areas to environmental plunder while simultaneously fighting our nation's rational shift to a green energy future.

The good news is that the people are revolting -- in the very best sense of the term -- against our corrupt leaders' rush toward climate catastrophe. Our hope is not in "leaders" but in ourselves -- as it has been throughout American history. From the Boston Tea Party forward, creative and gutsy public protest has been democracy's best friend. We must accept an awful truth about corporate and governmental power elites in our democratic society: They really don't like democracy at all. They prefer to rule by buying lawmakers, hiring lobbyists, running Orwellian PR campaigns and relying on authoritarian police power to control the People.

The Powers That Be pay lip service to our fundamental right to protest, but they merely mean that we should feel free to send emails, letters, phone calls and petitions to our congress critters -- about as effective as screaming "stop it!" at a Category 5 hurricane. But Americans are innately rebellious, so they ultimately push back against the stupidity and avarice of elites. Witness the uplifting example of 31 Greenpeace members who dared to exercise their First Amendment rights to get noisy, get in the face of power and speak out forcefully against the fossil fuel industry's destruction of humanity's living environment. To be heard, these stalwarts amplified their voice with a creative, direct-action protest: They teamed up to dangle 11 of their members from a massive 440-foot-high bridge spanning the Houston Ship Channel, the largest petrochemical waterway in the U.S.

The idea was to momentarily stop the 700,000 barrels of climate-altering oil that Exxon, Chevron, Shell and others ship out under this one bridge every day, thus dramatizing the destructive scale of fossil fuel use. It worked. For some 18 hours, the activists stayed suspended, and no tankers moved through the channel.

But the larger political message (conveyed through worldwide media coverage of the stoppage) was that if just 11 inveterate democracy protesters can stall the Big Oil colossus, the great majority of people who want to stop climate destruction for good can do so by rising up in force. As one of the bridge climbers put it: "I want to show people that we have power to pressure our politicians and change our system. We know there's a better world out there, but we have to demand it."