The unlikely rise and spectacular fall of John Bolton 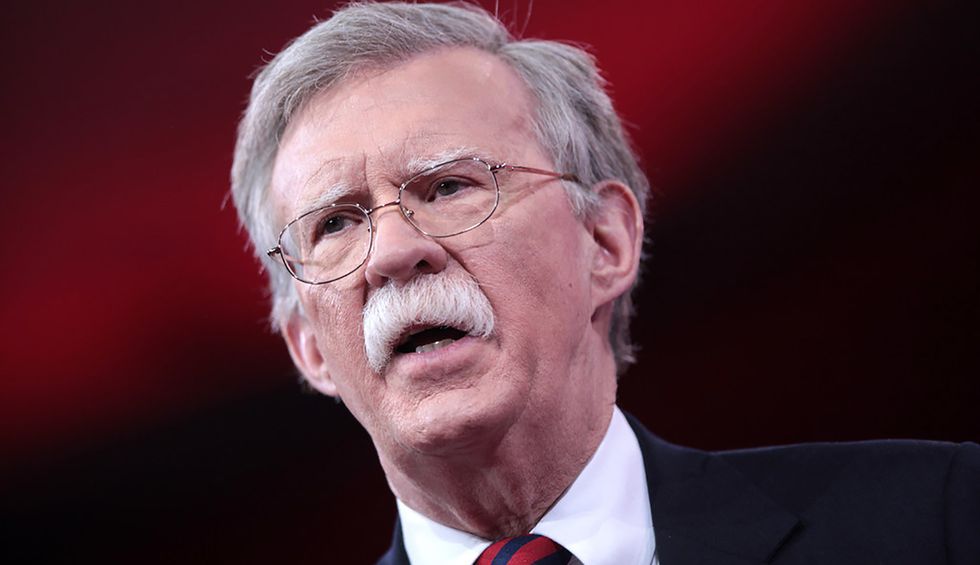 When John Bolton was named as Donald Trump's national security adviser I was as stunned as anyone. After all, he's well known as a man who wants to blow up the world while Trump is a man who thinks he can bring world peace by offering condo development deals to dictators and terrorists. They didn't seem like a good match. I did, however, think they might find a meeting of the minds under certain circumstances. After all, if a war were to happen, they share a similar philosophy about how it should be fought:

Trump’s words, both in public and private, describe a view that wars should be brutal and swift, waged with overwhelming firepower and, in some cases, with little regard for civilian casualties. Victory over America’s enemies for the president is often a matter of bombing “the s--- out of them,” as he said on the campaign trail.

Neither Trump or Bolton have any use for nation-building and both are contemptuous of America's allies as well. But other than a shared love for brutality they really didn't have anything in common. If Trump didn't hire people just because they're on Fox News, he would have known that an egomaniacal super-hawk with a taste for fierce bureaucratic infighting wouldn't mesh with his own belief that he can con anyone into doing his bidding by the sheer force of his personality.

Yesterday, Trump tweeted that he'd fired Bolton, and Bolton immediately fired back that he'd offered his resignation. Since Trump is the more notorious liar, I'm going to assume Bolton is telling the truth. From the sound of it, Bolton's going to make a whole lot of money on a book, probably set to come out right before the election. Trump may regret not keeping him in the fold.

This has been a long time coming, with Bolton clashing with everyone else in the administration and being publicly humiliated at every turn. But the precipitating event seems to have been last weekend's Camp David debacle in which Bolton adamantly opposed Trump's plan to bring Taliban leaders to the U.S. a few days before the 9/11 anniversary. He wasn't the only one, of course. It was a daft idea. But he seems to have been the one who spoke up and became the fall guy for that embarrassment.

Bolton never accepted that Trump doesn't have a geopolitical view or a foreign policy philosophy. He just wants to win the Nobel Peace Prize. Unfortunately, he's convinced he can do it simply by holding a photo op.

This is a story about fantasy and envy. The president's fantasy about being a great deal-maker and his envy of President Obama's peace prize. Zalmay Khalilzad, our former ambassador to Afghanistan, was running a process of negotiation with the Taliban to see if an agreement could be reached. About the first of September, he seems to have reached some kind of interim deal. What should have happened at that point [is] it goes into the government and different agencies look at it and say, "Do we like it, can we look at it, do we go forward, do we stop?" Trump got the smell of this and thought, "This is a done deal, Zalmay is going to get the credit, he's going to get the Nobel Peace Prize."

Frum added that Trump "wanted to be Jimmy Carter without the work."

Everything about that had to make Bolton crazy. Nothing could be more antithetical to his hawkish views than making peace in the first place, let alone doing so out of shallow self-interest. One assumes he didn't hold back his dismay. So his time was up.

Bolton had been working at cross purposes with Trump and the rest of the administration from the beginning. His legacy will be a bunch of failed initiatives and bad judgment. Most impressive of those failures was on Venezuela, the one policy he managed to persuade Trump to undertake. He was the main mover behind the campaign to push out President Nicolás Maduro and back opposition leader Juan Guaidó by imposing sanctions on the country under the assumption that Maduro would go quickly. That didn't happen and Trump lost interest, seeing yet another opportunity to be a hero go down the drain.

As a long-time North Korea hawk who had been instrumental in George W. Bush's failed policy and who had openly advocated bombing the country for years, Bolton had been pushing the administration to get tough with Kim Jong-un. Trump, of course, believes that his supposed friendship with the North Korean leader will persuade the dictator to give up his nuclear weapons. North Korea is a problem from hell, but any day that Kim hasn't launched one of his nukes is a good day. So Trump's delusions are at least buying time until someone who knows what he or she is doing can take over.

And then there's Iran, Bolton's great white whale. He has been agitating for war with Iran for decades now, and every time he seems to get close it slides out of his grasp. During the Bush years the plans were at the ready but even that administration, burned badly in Iraq, didn't pull the trigger. Watching from the wilderness during the Obama administration, Bolton no doubt felt deeply frustrated by the nuclear deal and undoubtedly felt that if nothing else, as national security adviser he would be able to get Trump to make his longed-for regime change happen. Trump was an Iran hawk too, after all.

Once again, Bolton misunderstood what Trump was after. The president knows nothing about Iran or the Middle East. He withdrew from the nuclear deal not because he wanted to go to war but because he wanted to make his own deal and have a big ceremony announcing that he can make better deals than Obama.

The results of all this have been disastrous. American foreign policy is failing everywhere in the world. From Trump's reckless trade war with China to North Korea (which tested more missiles this week) to Iran, Afghanistan and everywhere else it's a mess. But John Bolton was the one person in Trump's orbit who has consistently tried to get him to go to war.

Trump wants to economically dominate other countries, backed up by military force. He wants to be hailed as a great hero and dealmaker who solved intractable problems with his personal acumen and charm. He is incapable of doing any of that, of course. But at least with Bolton gone, we don't have to fear that one day the president will wake up and realize he's failed on all those counts with the nation's most aggressive über-hawk whispering in his ear that he can get what he wants by using overwhelming military force. In the Trump era, that's about the best we can hope for.