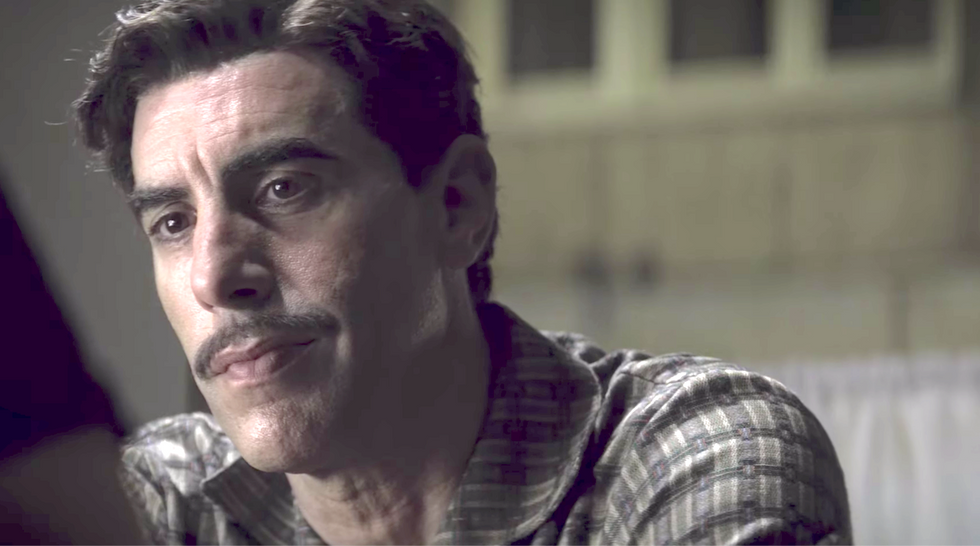 Vanishing into the skins of other men is Sacha Baron Cohen’s signature work. Best known as a comedian, he impersonates completely different characters — Ali G, Borat, his various "Who Is America?" personas — to such a believable degree as to fool politicians, famous journalists, heads of powerful lobbies and celebrities. Sometimes his subjects are in on the joke, but far more often, he utterly dupes them.

That makes “The Spy,” Netflix’s limited series based on the life of Israeli operative Eli Cohen, about as natural a transition into serious drama as a comic could possibly want. Playing the Mossad agent  (who is no relation) requires the actor to smoothly live inside two separate identities without changing his appearance, or letting his loved ones in on the truth of his double life.

For Cohen, this difficulty is the meat of his show’s appeal — not the scenes of subterfuge, the stake-outs or follows. His emphasis is on bringing to life the intensity of the man he’s playing, and how frayed his life becomes because he excels at his job.

Very early on in “The Spy,” Cohen establishes this by showing a worn-down Eli hesitating at the directive to sign his name. The scenes that follow establish the reason for this. Family and friends in Jerusalem know Eli Cohen as a loving father and devoted husband whose ambiguously defined job as a "purchaser" for the government force him to be away from his family for many months at a time.

High-powered Syrian officials, on the other hand, know him as Kamel Amin Thaabet, a successful businessman eager to rise in the government ranks and support the ambitions of a military officer with a hunger for power. Eli excels at being Kamel and at the height of his undercover work, is named chief adviser to Syria’s minister of defense.

Watching Cohen play these identities both apart from one another and, even more dangerously, within each other, creates such fascinating tension throughout most of the drama’s six episodes that the viewer almost forgets the damage done to friends and allies Eli cultivated and cast aside along the way.Writer and director Gideon Raff reassures the viewer that these people aren’t disposable to Eli by assigning the character’s tiniest psychological tells and larger private breakdowns equal intensity, mostly seen in the final hours (co-written by Max Perry) as the toll of living as Kamel, a man who isn’t real, begins to affect Eli's sanity.

On one side, Eli has partners in the field telling him that his "real" identity no longer exists: “This is not a role that you are playing. You are either him,” says his partner — meaning Kamel — “or you are dead.”

Raff’s Israeli drama “Prisoners of War” was the inspiration for “Homeland” — he also created “Tyrant” for FX — and “The Spy” contains much of the measured pacing and quiet tautness of those shows, both of which depict espionage and political machination as a steady, consistently pressured affair interrupted by threats and violence.

Despite its subject matter and setting, however, “The Spy” is only as politically inflamed as the viewer's paradigm desires it to be. Even a moment when Eli remarks to his wife that his fellow Israelis treat him as a second-class citizen because of his darker complexion is treated as a narrative descriptor, not a trait that affects his work, or how his government views him.

Eli Cohen’s service in the Mossad between 1961 and 1965 made him a national hero in Israel. His wife is still pushing Syria to return his remains to her. But this is a story told from a definite point of view; to fend off any wavering sympathies among the viewership, Raff writes in an appearance by the bin Laden family.

Beyond all else, though, Eli Cohen provides Raff and Sacha Baron Cohen the opportunity to explore the interplay and clash between a man’s outward identity and his interior self, and the question of whether one is really a more reliable mooring than the other.

Cohen is incredible at fleshing out this duality, which comes as no surprise given his filmography. But even this aspect also shows off the give-and-take partnership between Cohen and Raff as performer and creator.

As straight as Cohen plays the operative, there would nevertheless be a temptation to view Eli’s story as somewhat of a reference to the performer’s previous work, save for the visual signaling and expansive weight given to the performers surrounding Cohen. One of Raff’s shrewdest visual techniques (deftly executed by the series' director of photography, Itai Neeman) juxtaposes color filters in scenes from disparate parts of Eli’s life, rendering his Israeli scenes in muted grays and browns and much of Kamel’s Syrian and Argentine affairs in bright tones. This provides its own wordless commentary: Sepia and black-and-white can feel safely nostalgic and distant all at once, a sad acknowledgment of how far away the spy has roamed from the warm security of Nadia and home.

Ratzon-Rotem is an admirable match for Cohen in the scenes they share together, as is Waleed Zuaiter as Amin Al-Hafez, the politician whose trust Eli gains and exploits to benefit the Israeli government. Alexander Siddig and Noah Emmerich each turn in impressive work in their turn, particularly Siddig, whose distrustful security head is downright frightening at times.

The fact that “The Spy” leaves the viewer as awestruck by the story as by Cohen's convincing and emotionally-layered portrayal makes it a stone-solid drama for anyone who prefers stirring espionage drama over staged chases and fight choreography.

Those delights have their place, to be sure. But witnessing Cohen walk us through the schematics of a spy’s identity, staring at the cracks and breaks in his humanity as he steps out of one real life to live in another that's an elaborate fiction, can be every bit as engrossing.