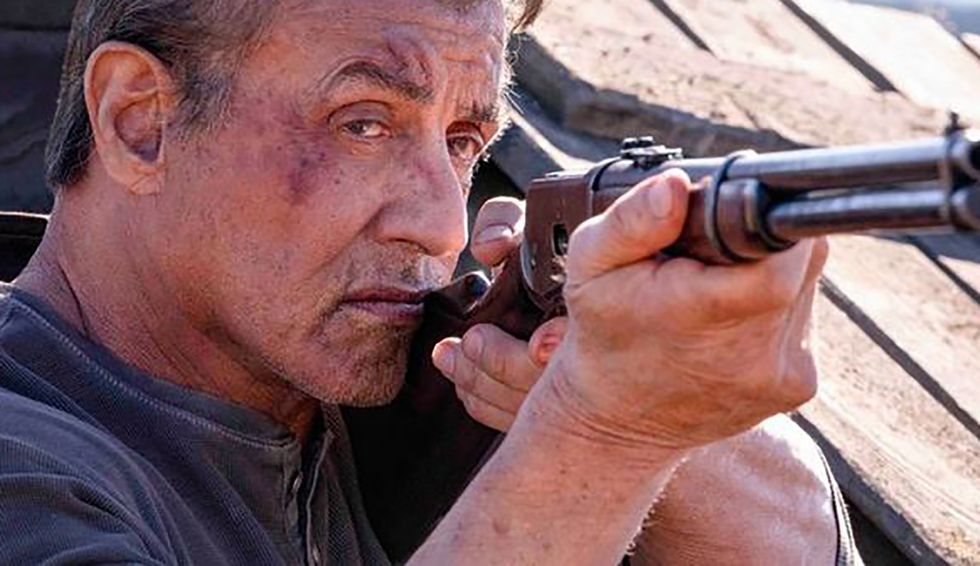 "Rambo: Last Blood," the latest in the long-running franchise about a traumatized war veteran (Sylvester Stallone) turned on-demand badass, is less an escapist action movie and more a dramatized manifestation of the most notorious sentences from Donald Trump's presidential campaign announcement speech: "They're bringing drugs. They're bringing crime. They're rapists. And some, I assume, are good people." Even for a series that has always been shaped by a right-wing worldview, the only reason for this latest sequel to exist — besides generating profits from die-hard Stallone fans — is to validate MAGA-world bigotries about Mexicans.

When New York Times film critic Janet Maslin reviewed the original movie in the series, 1982's "First Blood," she noted that "Vietnam is to 'First Blood' as rape was to 'Death Wish': it's the excuse for a rampage of destruction." She later added that "the movie tries hard to make sure that Rambo will be seen as a tormented, misunderstood, amazingly resourceful victim of the Vietnam War, rather than as a sadist or a villain."

All of this is true, but with a sinister twist: The film repeatedly perpetuates right-wing myths about America's treatment of Vietnam War veterans, such as that they were regularly spit on and harassed by antiwar protesters (a 1971 Harris Poll survey found that 99% of veterans said they were treated in a friendly manner by friends and family, and 94% said the same thing of their generational peers). It makes valid points about PTSD and institutional indifference to veterans' health, but focuses on the idea that America is full of ingrates who can't appreciate the idealized, Nietzschean hyper-masculine men that supposedly represents everything noble about this country. When the protagonist goes on a rampage, it is morally justified by how he was persecuted by small-town cops — and his persecution is brought on by a sadism rooted not in the truth, but in right wing myths about America that allow its audiences to root for someone who would otherwise be seen as contemptible.

That is the key to understanding the Rambo movies: They are gruesome, cruel, egregiously violent stories that justify their existence with political messaging. If they were straightforward exploitation films — explicitly meant to horrify, titillate or just in general get the adrenaline pumping — they'd be as innocuous as any other action movie created in that style. The problem is that they aspire to be more than escapist entertainment; their goal is to send a message. When you take action film genre tropes and graft a political narrative onto them, people often imbibe the ideology along with the spectacle. That is when they become propaganda.

The best film in the series is easily the second installment, 1985's "Rambo: First Blood — Part II" (you'll quickly notice that the titles become progressively more nonsensical), which at least had the good sense to be premium-grade cheesy '80s action shlock. Things blow up real nice in that one, people get mangled and mauled in creative ways and from a pacing perspective it zips right by like other '80s action classics such as 1987's "Predator" and 1988's "Die Hard." Yet while the craftsmanship is top notch as overwrought action movies go, the politics are still quite toxic. As New York Times film critic Pauline Kael wrote at the time, it is "a wired-up version of the narcissistic jingoism of the John Wayne-Second World War pictures. Its comic-strip patriotism exploits the pent-up rage of the Vietnam vets who feel that their country mistreated them after the war, and it preys on the suffering of the families who don’t know what happened to their missing-in-action sons or brothers, fathers or husbands

Yes, "Rambo: First Blood — Part II" is all about the idea that Communist no-goodniks and their liberal pencil-pushing bureaucratic enablers in Washington secretly know that there are Vietnam War POWs being held captive by one-dimensional Vietnamese caricatures, being tortured because America reneged on war reparations after the conflict (one wonders how leftists are supposedly such spendthrifts on certain occasions and then cheap on others). It vilifies both the Soviet Union and the Vietnamese in ways that are consistent with a neoconservative philosophy, both in the Cold War era and by implication in our own, and adds some conspiracy theorizing on top of that. One can imagine a casual Republican watching this movie, having a blast and then cursing about the damn liberals who betray America's soldiers but never pick up a gun themselves.

The irony is that the Rambo series should have learned to stop being political after 1988's "Rambo III." In retrospect, the story of an American who teaches the Soviet Union that invading Afghanistan is both immoral and strategically futile is downright embarrassing. One of the Afghan rebels famously tells Rambo, "Alexander the Great try to conquer this country... then Genghis Khan, then the British. Now Russia. But Afghan people fight hard, they'll never be defeated."

Politically speaking, this is the most ironic movie in the series, given that we have been in Afghanistan since 2001. There are obvious implications toward American foreign policy today, but the movie couldn't have known that, so it unintentionally criticizes the same neoconservative foreign policy ventures that the second film directly promoted (and this one tries to do too). One would hope that after such a humiliation, the Rambo series would have been discontinued or at the very least refrained from propagandizing in the future. Yet after a 20-year hiatus, 2008's "Rambo" hit theaters. It had the least offensive message in the series — it discusses the persecution of Christians in Burma, as well as the 2007 Saffron Revolution, both of which were real tragedies — but treats all of its non-white characters as disposable, whether because they're cartoonish villains or because their terrible deaths are meant to make the film seem substantive. Even worse, instead of leaning into its shlocky action movie roots like "Rambo: First Blood — Part II," it tries so hard to be "serious" in its style that the end result is simply depressing. Think "The Hurt Locker," but stupid.

This brings us to "Rambo: Last Blood." Apparently learning nothing from the previous film in the series, "Rambo: Last Blood" is even more bleak and dour than its predecessor, making it a depressing slog from the first frame. Even worse, because Stallone is now in his '70s, the film can't pull off the virtuoso action sequences that were once the hallmarks of the franchise.

As a result, from the sole perspective of action movie spectacle, this is easily the worst of them all. There are no memorable action stunts and Rambo seems less like a badass than a delusional old man (one who does dumb things that would have gotten him killed if the script didn't need to find implausible ways of keeping him alive). Everything about this feels lazy and half-hearted: Even the subtitles have erratic and inaccurate punctuation, a little detail that is symptomatic of the bigger problems. The one viscerally effective moment of the movie comes at the very end, when a character has his chest carved open and his heart ripped out. It would have been a powerful climax to a better action movie, but feels like a cheap geek-show gimmick here.

Nothing about this movie works — not Adrian Grunberg's directing, or Matt Cirulnick's and Sylvester Stallone's writing. Not the acting, the stunt work or the special effects.

Yet it is the political perspective of "Rambo: Last Blood" that makes it particularly appalling. Yes, there are a handful of "good" Mexican characters depicted in the film, mostly defined by their love for Rambo himself, but the vast majority are portrayed as heinous. There is the best friend who sells one of the main characters to a sex slave cartel so she can steal her jewelry, the criminals who boast about their dehumanization of women, the shots of Mexico that ignore all of its beauty and focus on depicting it as a cesspit. The message here is that you can't safely go to Mexico, especially if you're a young woman, because everyone there will try to rape and exploit you, and also you definitely don't want those Mexicans coming to the United States, unless you have a Rambo on your side who will 'Merca them to death.

At a time when children from Latin America are being ripped away from their parents at the southern border, when the president is planning to spend billions more on a boondoggle of a border wall, when racism against racial minorities is peaking. In other words, when we live in Trump's America, it is impossible to view this film as anything other than a rationalization of the very bigotries that are hurting millions of people in our real world.