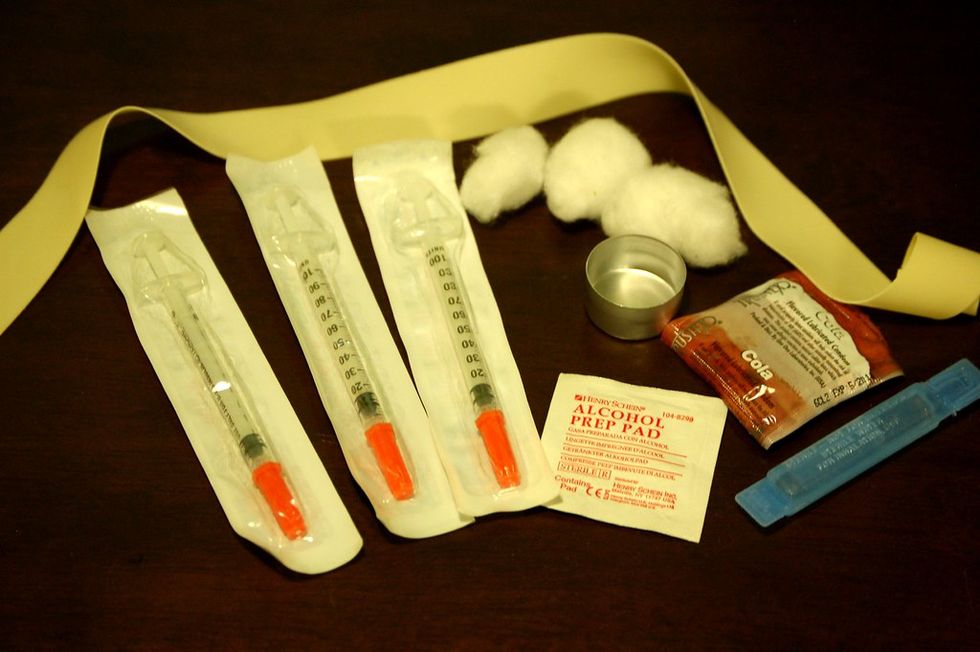 Programs that provide sterile syringes in exchange for used ones for people who use drugs reduce HIV and hepatitis infections, promote safer practices, connect people with other health and social services and save money, as reams of evidence has shown.

Regardless, the fight to convince Americans that the lives of people who use drugs matter continues, especially in more rural and conservative areas.

Prosecutor Brad Cooper of Johnson County, Indiana, is a great illustration of how the war on syringe exchanges still thrives. In 2017, Cooper charged Toby Magness with multiple felonies for  the victimless “crime” of possessing sterile syringes he obtained from a program in a different county. Magness ended up getting thrown into prison for two years.

Fortunately for Johnson County, Cooper just resigned after himself getting convicted of criminal confinement, identity deception, official misconduct and misdemeanor domestic battery. All the counts related to a domestic violence incident, during which he beat a woman and called her a “dog.”

His opinion that syringe exchanges are “enabling people to shoot heroin,” and that people who use these vital services should be prosecuted, is not uncommon.

In El Paso County, Colorado, which includes Colorado Springs, similar ideologies tanked efforts to legally open a syringe exchange in 2013 and 2017. Now, there is a local hepatitis C crisis.

In Roanoke, Virginia, where state law mandates law enforcement approval before a syringe exchange can operate, clients are issued a card with “a disclaimer reminding participants that they are still subject to criminal prosecution if caught with paraphernalia or substances.”

However, law enforcement opinions do vary across the country, as do state laws. Al Della Fave⁠—then the spokesman for the mostly-draconian former Ocean County, New Jersey, Prosecutor Joe Coronato⁠—spoke favorably of syringe exchanges in 2017, citing how used syringes pose risks for the police. Della Fave said that after officers experience inadvertent needle sticks on the job, “you can see the terror in their eyes and on their face as they realized what’s happened to them.”

Most states now host some kind of syringe exchange program, according to the Henry J. Kaiser Family Foundation—though legal programs in the vast majority number in the single digits.

But the laws providing legal protection for them tend to be flawed, due to the inclusion of loopholes that can be used for unnecessary law enforcement harassment.

For example, Florida Governor Ron DeSantis, a Republican, recently signed into law provisions that permit county commissions to authorize syringe programs, and protect people who use them from prosecution. However, there are numerous strict eligibility requirements. In addition, police officers are immune from civil suits for wrongfully arresting someone utilizing the program, if they can claim doing so in “good faith.”

Other states only permit syringe programs via particular local ordinances. In Pennsylvania, that means someone with a syringe obtained from a program is safe in Philadelphia and Pittsburgh, the most liberal areas of the state, but can be thrown into jail anywhere else.

Distressingly, there is a federal criminal law that carries up to three years in federal prison for obtaining, for sale or otherwise, drug paraphernalia in “interstate commerce.” The provision does not seem to have been used against a syringe exchange program, and it does provide an exemption for a “person authorized by local, State, or Federal law to manufacture, possess, or distribute such items.”

That said, an unauthorized syringe exchange could easily become a target for persecution for a US Attorney operating under Trump’s abnormally politicized Department of Justice. (After all, the US Attorney of Arizona, Michael Bailey, is obsessively pursuing felony convictions for people providing humanitarian aid for migrants at the border with Mexico.)

Putting up extra obstacles to community health in the name of coerced abstinence is the bread-and-butter of the War on Drugs. Public health departments should recognize that whether due to funding, restrictive laws, or distrust from people who use drugs, they do not help everyone.

Grassroots harm reductionists⁠—and even churches⁠—assist people these departments cannot reach. The public health and medical spheres should push for the abolition of “drug paraphernalia” laws altogether, to prevent harm from abusers like former prosecutor Brad Cooper.