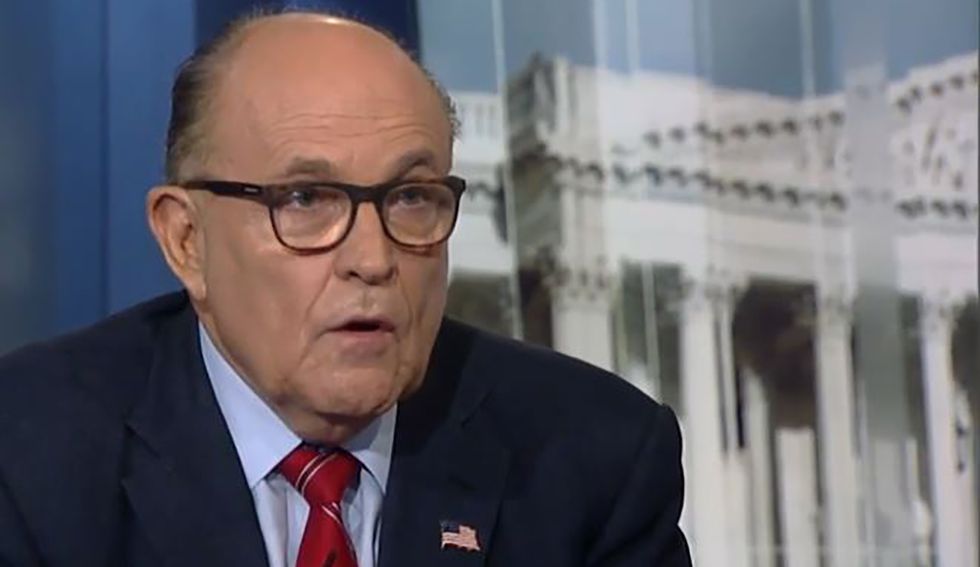 As the dam between Donald Trump and impeachment proceedings crumbles away, he knows there is still one man he can count on to go out there and … admit everything on national media in the worst possible way. Ever since he became Trump’s personal attorney, Rudy Giuliani has been popping up on television screens to declare no, well yes, okay, hell yes, Trump did something terrible. But whether that terrible thing was paying off women to silence them in advance of the election, or confessing to attempts at extorting a whole nation into manufacturing political dirt, there’s been a narrative around Giuliani’s actions. Rudy, goes the theory, is out there expressly to let spill the crumbs of the story, giving the fury a chance to dissipate before Trump himself has to eventually, if ever, own up to his actions.

However, there is another theory that would generate the same results: Rudy Giuliani is a terrible lawyer. Giuliani’s stated legal rationales are rarely in the ballpark of anything that actually exists in law. His bug-eyed rants regularly end up leaving behind spittle-flecked threads that can be pulled to unravel still more scandal. It’s not so much that, after half an hour of watching, Giuliani viewers know less as it is that half an hour of watching Giuliani is like seeing someone staggering around in worn-out underwear—you’ve really learned things you’d rather not know, in ways that were decidedly unpleasant.

But in the last four days, America learned that Rudy Giuliani was not just Donald Trump’s attorney, but also a special agent of the United States. Special … not in the James Bond way. Instead, Giuliani was working on an assignment from Secretary of State Mike Pompeo to deliver a message to the people of Ukraine—that message being, Make up something about Biden if you ever want to see your aid package.

Not only did Pompeo endorse Giuliani’s arm-twisting trip on Face the Nation (in the midst of the most distorted, unconvincing interview that anyone has yet done on this whole affair, including dropping a claim that Joe Biden “interfered in an election”), but it’s also become clear that Giuliani followed up Trump’s phone call to the Ukrainian president by confronting a Ukrainian official in Madrid, with the full support of Pompeo.

Back in May, when The New York Times was happy to hand Giuliani a big chunk of the front page so he could throw conspiracy theories at Biden and completely mangle the timeline of events in Ukraine—a timeline the paper only seems to have realized was completely wrong in the last few days—Rudy was claiming that his actions in Ukraine were all “private.” Except he couldn’t even keep that straight through the length of an interview. That same week, he said he was headed to Ukraine to “meddle in an investigation … to help my client.”

This wasn’t some whim of Giuliani’s that got stuck in Trump’s bonnet and resulted in a spur-of-the-moment decision by Trump. This is a full-bore conspiracy that permeated every section of the Trump White House.

Mike Pompeo was obviously neck-deep in this thing from the beginning. Considering that Giuliani mentioned several times, even while claiming he was going to Ukraine “as a private citizen,” that he had briefings from the State Department, it would be completely unsurprising at this point to find that Pompeo and Giuliani were deeply involved at the start of the whole thing—that they worked together to deliver this story to Trump and got him hyped over the idea of having one up on Biden.

But however and whenever Pompeo came in, he was actively participating in a conspiracy to force a sovereign nation to manufacture evidence Trump could use in a campaign. This also means that Pompeo knowingly used his time, and the resources of the State Department, to actively aid one political campaign in obtaining an advantage over another. Through extortion. It’s hard to say how many laws Pompeo may have broken to this point. Let’s say … many.

Mick Mulvaney was not only aware of Trump’s actions regarding Ukraine, but carried the message to others at least a week before Trump actually got on the phone with Ukrainian President Volodymyr Zelensky to tell him to play ball or else. Stephen Mnuchin was involved at the very least to the extent of being aware of Trump’s actions and withholding funds.

The top officials in Donald Trump’s Cabinet, along with his personal attorney, worked together to withhold funds from an allied nation even as that nation was engaged in open conflict with Russia. Giuliani had the assistance of Pompeo’s State Department both in his initial, failed attempts to find someone to play ball in Ukraine, and in his later trips made after Trump had placed a hold on the military aid. The White House staff was not just aware that all this was done, but it was aware of why.

That is what conspiracy looks like. And, as a reminder, we still have not seen the whistleblower report. Whatever is in there is likely to go over some of these connections with a big screaming highlighter.