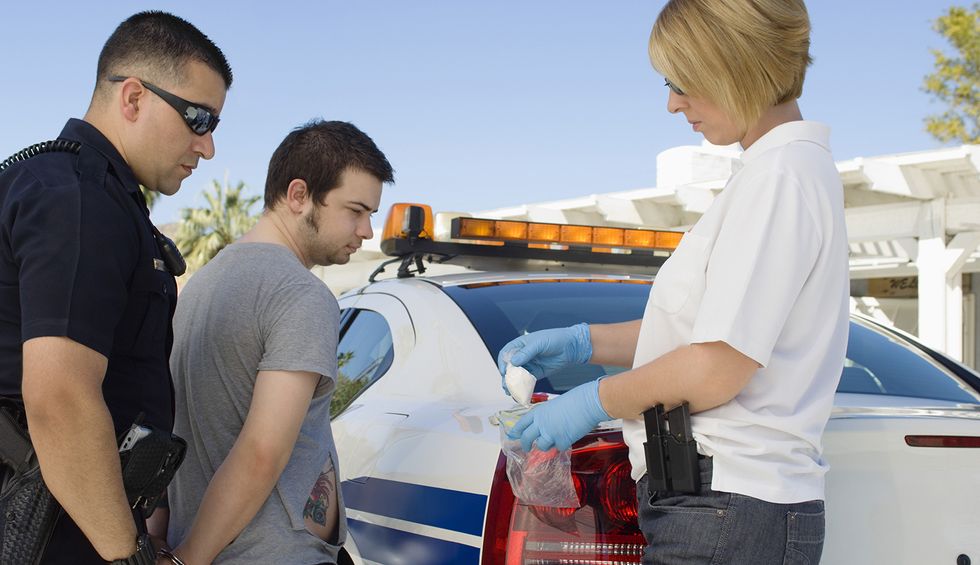 Image by sirtravelalot, Shutterstock
Will Mason
,
The Conversation
and
Will Mason
September 15, 2019

The new prime minister, Boris Johnson, has pledged to recruit 20,000 new police officers in England and Wales and appointed Priti Patel, an MP who said in 2011 that she wanted to bring back capital punishment (she has since changed her mind) as his home secretary. Many have voiced concerns about the hardline kind of governance this implies.

They aren’t wrong. In her first interview as home secretary, Patel has argued that she wants to “empower” the police to “stop criminality” and hopes that criminals “literally feel terror at the thought of committing offences”. With the prospect of more police on the streets and with Patel pursuing such a hardline approach it is particularly important to reflect critically on police practices and to learn from mistakes of the past.

Research has consistently documented the over-policing of black and minority ethnic communities in Britain. Black people remain disproportionately represented across all areas of police data. It is also the neighbourhoods where black and minority ethnic children are more likely to live that receive the highest levels of policing and surveillance. But more police does not always mean less social problems.

A number of contradictory and harmful consequences have been associated with intensive localised policing, known as “crackdown operations”. These include: the short-term nature of positive impacts, a failure to address the root causes of crime, and damaged police-community relations.

My recent research documents the immediate, short and longer-term impacts of one particular drugs crackdown operation in a disadvantaged part of a northern English city. The findings of this study suggest that the operation failed to achieve its long-term goals. Drawing on detailed observations and interviews with a group of mostly Somali young men (aged 11-25) my work suggests that police must be wary – some of their practices can do more harm than good. My research demonstrates that “terror” through intensive policing practices is not likely to “stop criminality”.

Operation DRUGS took place between 2009 and 2011. It involved deploying undercover agents into parts of the city known locally as drug dealing hotspots. These agents were unknown to local police and created opportunities for crimes to be committed by offering to exchange designer items (such as clothing and trainers) for drugs.

Spanning nearly two years, the operation culminated in a series of police raids and the prosecution of more than 50 people for drugs-related offences. This may sound like a success. But beyond the prosecution of convicted drug dealers, Operation DRUGS also produced a number of unintended and long-term consequences for residents in the communities affected. Paying attention to the voices of those residents reveals the unintended, yet harmful consequences of the operation.

I found that local police bore the brunt of community anxieties and frustrations in the weeks that followed the operation. In the local youth club, one young person explained how he had lost faith in the police, feeling like rather than acting as a preventative force they were “there to find their targets”. Efforts by local police to build trusting community relations had been undermined by an operation in which many local officers were not involved.

At the Magistrates Court, where families gathered to oversee the trial process, community workers described how the police were accused of institutional racism and complicity in what was seen to be a deceitful operation, where vulnerabilities had been exploited to get young people to commit crimes. Following the trial a number of parents boycotted the local youth forum, for failing to protect their children from the local drugs market.

The operation also had unintended effects when it came to the local drugs market. Research has shown that crackdown operations can create vacuums and opportunities for new groups of dealers to repopulate those markets.

Similarly, the young people in my study voiced their concerns that in the years following the operation the local situation had deteriorated. One young man told me:

Young people also worried that since the operation, the culture and practice of drug dealing had shifted, in ways that became more open and blatant. Adi* recounted how “guys now, they’re busin’ shots [selling drugs] outside their own mum’s house”.

This proliferation of local drug dealing provoked a range of anxieties for residents. These included increased contact with drug users and addicts (drugs had apparently become easier to purchase, due to the increasingly open drug dealing practices), exposure to drugs paraphernalia such as used needles as well as the perceived risk of violence associated with drugs markets and concerns that younger siblings might be enticed by the drug dealing opportunities that presented.

The young people in this study were routinely subject to racial profiling and heavy-handed policing. Examples ranged from rough stop and search practices to one instance where a 15-year-old boy was rugby tackled by police officers in riot gear on his way home from football practice. For these young people, Operation DRUGS compounded the harms of racial profiling and misidentification. This was communicated through their acknowledgement that the police viewed them as “permanent suspects” and were preoccupied with “catching them out”.

That’s why there is no trust between the community and the police. There just isn’t. If they would be honest with us … then there would be, but with them finding ways to just do you over, there’s going to be no trust

On more than one occasion young people shared accounts of being photographed by police as they went about their daily business, like playing football or going to the library.

At a time of significant investment in the police, it is critically important to think about what good policing looks like. The accounts observed by this research and supported by other international studies show that intensive policing interventions can fail to achieve their goals. Instead, police crackdown operations are likely to exacerbate the structural inequalities that can influence criminality in the first place.

Rather than emphasising fear as a deterrent of crime, investments in policing should focus on the restorative task of building trust in communities and working collaboratively to create safer environments by tackling the root causes of crime.

* All participants’ names have been anonymised to protect their identity.

Will Mason, Lecturer in Applied Social Science, University of Sheffield.