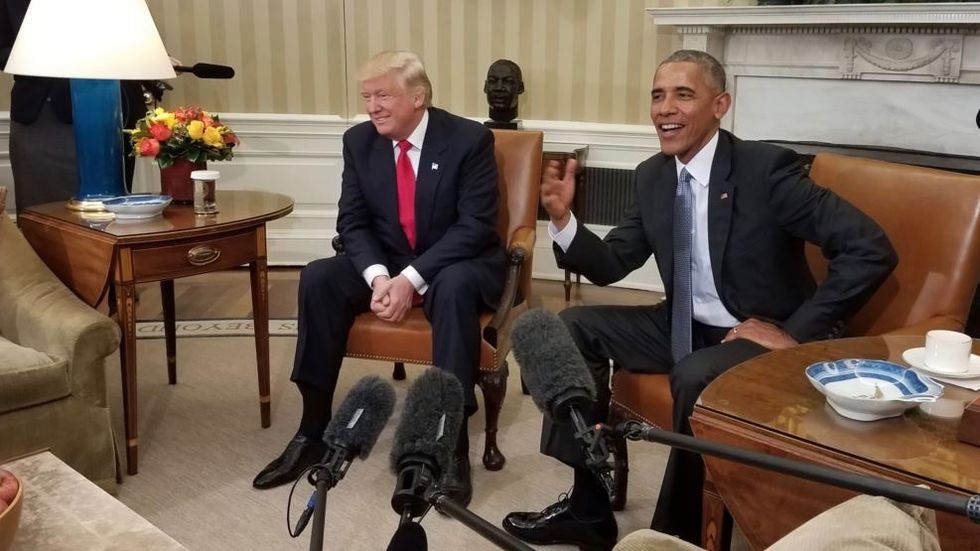 Former President Barack Obama appeared at a tech conference in San Francisco on Wednesday and described the process he used to make decisions during his eight years in the Oval Office. Perhaps unsurprisingly, it is the exact opposite of how President Donald Trump operates.

And that’s if and when Trump bothers to listen to any of his advisors at all.

As is well-documented, much of Trump’s “policy” and “decision” making comes during his morning “executive time” as he catches up on “Fox & Friends.” He is also known to make decisions based on whatever it is the last person he spoke with says.

Meanwhile, former President Barack Obama had – and has – a remarkably different style.

First, Obama told attendees at a conference hosted by data analytics firm Splunk, “make sure you have a team with a diversity of opinion sitting around you.”

“The other thing that’s helpful is not watching TV or reading social media. Those are two things I would advise, if you’re our president, not to do. It creates a lot of noise and clouds your judgment,” Obama said, as Business Insider reports.

“Then what you have to do is create a process where you have confidence that whatever data is out there has been sifted and sorted,” Obama said. That means putting together teams of people who can sort through the minutiae and present the most important parts to him.

Obama also warned about wasting time and energy on “opinion wrapped up as fact,” clickbait, and polls.

On personnel, Obama appeared to throw a dig at President Donald Trump.

“I’m proud of the fact we didn’t have indictments. I’ve said that before but that is pretty rare in modern day,” Obama told the audience, as Axios adds. The news outlet claimed, “Obama swipes Trump on watching TV and using Twitter.”

One former Obama speechwriter disagreed with the assertion Obama was aiming at Trump:

But to Obama’s point, Special Counsel Robert Mueller indicted dozens of people, although not all were directly connected to President Trump. At least five people from the Trump administration or associated with Trump pleaded guilty to criminal acts.

Those don’t include people like former RNC Deputy Finance Chairman Eliott Broidy, who has been under investigation.