NOAA leaders backed Trump's hallucinations over their own forecasters. They must resign 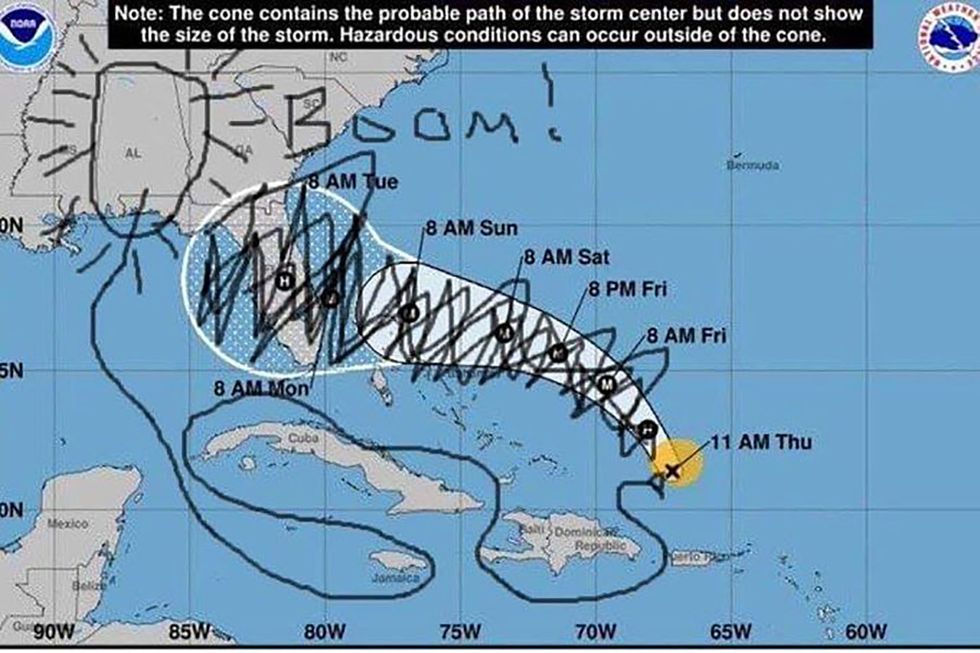 The astonishing statement from the National Oceanic and Atmospheric Administration attempting to provide some justification for Donald Trump's obsession with proving himself right about a hurricane threatening Alabama, days after forecast tracks had fully removed the state from Hurricane Dorian's potential path, is not funny. Donald Trump taking one of his thick black markers from the signin'-stuff drawer to hand-alter a printed map, proudly presenting it to the public as if his new scribble was official information—now that is funny.

And Trump's overall fixation with convincing the nation that he did not simply misspeak when mentioning Alabama, instead launching an infuriated weeklong effort to rewrite our shared reality to make it so, might have been a bit funny as well if it did not so thoroughly demonstrate the increasing instability of a man purported to be in charge of our government.

NOAA leadership stepping in to chastise its meteorologists for contradicting Dear Leader's pronouncements of where a hurricane might head, however, is about as funny as a heart attack. The notion that the National Weather Service should not weigh in on false information that could impact millions, as expressed in an email sent by top NOAA and Commerce Department officials, is the stuff of insanity. It hops well over the line of North Korea-styled rewrites of the news to boost Dear Leader's apparent prowess; it is 1984 turned into dinner theater.

Weather maps. We now cannot trust that the government will issue accurate weather maps if they conflict with Dear Leader's most recent mental breakdown. NOAA leadership determined, and redetermined, that protecting Dear Leader from minor scorn was a more pressing responsibility than accurately informing the public about the agency’s own weather predictions.

The move has led to widespread scientific uproar, both inside NOAA and outside it; it seems there are not many who can stomach the notion of misleading the public, via omission, on purpose. Reporting by The Washington Post suggests that the two governmental fuckwits who appear to be most responsible for warning National Weather Service forecasters to remain silent about Donald Trump making up the fking weather are acting NOAA administrator Neil Jacobs and, notably, ex-Trump campaign functionary Julie Kay Roberts, now ensconced as the agency's director of public affairs.

It goes without saying that both should resign.

The Post also tags the "leadership of the Commerce Department," sans an absent Wilbur Ross, as having approved the release, which puts the Ross offices once again in the midst of a new effort to be crooked for Dear Leader's sake. The leadership of the Commerce Department is made up of either cowards or sycophants, and they should all drive their cars into nearby rivers.

The galling bit about all of this, the thing that makes it so bleedingly serious, is its appalling triviality. Trump misspoke when listing states that would be impacted by an upcoming hurricane. It was a nothing, a far more minor burp than any of a hundred recent and dire misrepresentations of reality to come from the increasingly erratic Trump in recent weeks, and he was quickly corrected by myriad newscasters and weather offices that gave the public accurate information.

That's where past instances of Trump "misspeaking" would have stopped. He botched it. He was mad that he botched it, but them's the breaks.

To have political leaders within government offices react to such a minor flub, already repaired, by warning their professionals to not repair Trump's misstatements is ... shocking? Corrupt? Lickspittlus Maximus? Near-Idiocracy-level thickheadedness, willingly self-inflicted?

We are not as advanced as we think, you know. As a nation. We are not as far from past cruelties as we pretend to be, and not half as overly clever as we imagine ourselves to be, in comparing ourselves to more poorly run places of the world, and not half as far from the sort of widespread, free-for-all crookedness that has turned other democracies into boorish, futile puppet shows.

It is idiots like this who cause it. Dimwitted, toadying career-boosters willing to bend each rule just a wee little bit if it makes the rank above a little more pleased or, at the least, a little less insufferable. It is the goddamn weather. If we are going to allow Dear Leader to reinvent the goddamn weather, while the scientists are warned to hold their tongues, there is not much else that government toadies would not let Dear Leader reinvent on their watch.