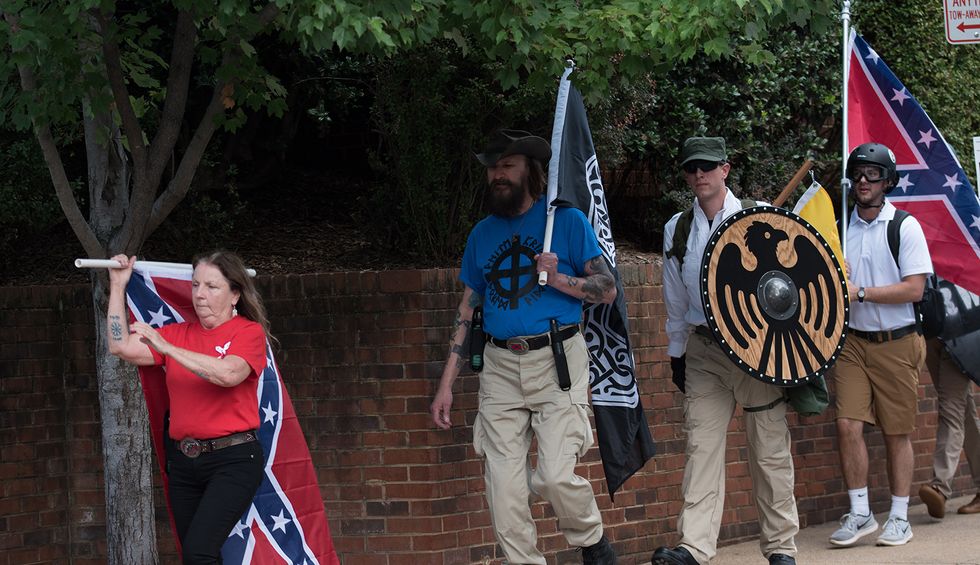 A Nazi flag has been found flying from a pole outside of a Battle Creek, Michigan elementary school. Construction workers noticed that in place of the American flag which usually hung in front of the school, a Nazi banner was flying. Thankfully, crews noticed this on a Saturday morning, so it seems that Riverside Elementary School students didn’t see it.

According to school officials, someone broke the lock on the flag pole and swapped the flag and banner at some point on Friday night. Now, Battle Creek police are investigating the incident. According to Police Chief Jim Blocker, who spoke to CNN, it’s going to be tough to figure out who hung the Nazi flag.

You might think: Fingerprints! But according to authorities, the Nazi flag had been handled by numerous people by the time it actually reached them, so that makes tracing prints quite a bit harder. Another great guess: security camera! Schools must have surveillance, no?

Generally, yes. But because of construction work, the school didn’t have any functioning video surveillance in the area at the time. As of now, any guesses as to whether this was intentional—did someone hang the Nazi flag knowing the camera was out of service, for example—is all speculation and unconfirmed. “It's enough to deserve our attention and to send a message that it's not appreciated and we'll actively go after you," Blocker stated to CNN during a phone interview.

The school is horrified. "It is disturbing that an individual would use school grounds as a platform to promote such beliefs," Lakeview School District Superintendent Blake Prewitt said in a statement, as reported by CNN. "Our story as a district is so much more than this."

As reported by the Battle Creek Enquirer, Battle Creek police say that the Nazi flag doesn’t qualify as a hate crime. Why? Because, as of now, it doesn’t appear to have targeted any specific group or individual, according to police. On the other hand, the removal of the American flag falls under malicious damage or property or vandalism.

“We've been communicating with Lakeview School administration,” Sgt. Chris Rabbitt of the Battle Creek Police Department explained to the Battle Creek Enquirer, “keeping an eye on that or anything suspicious. ... It's more shock value than anything. Not something we want to see in our community. It's distasteful, to say the least."

Distasteful says the very least, indeed. Especially when we consider that Nazi gestures, symbols, songs, and “jokes” (yes—really) seem to be all too popular in schools today. Remember the Minnesota teenagers who sent out Nazi-themed Valentine’s dance invitations? Or the students caught on video singing an old Nazi marching song? Or the teenage boys in Wisconsin who appeared to give a Nazi salute in a prom photo? While it’s obviously unlikely that an elementary schooler hung this flag, it’s more important than ever that schools—and law enforcement—send a strong message that white supremacy and anti-Semitism are no laughing matter.