MSNBC meteorologist hilariously busts Trump’s lies about Alabama: ‘This is science — we actually do have the data’ 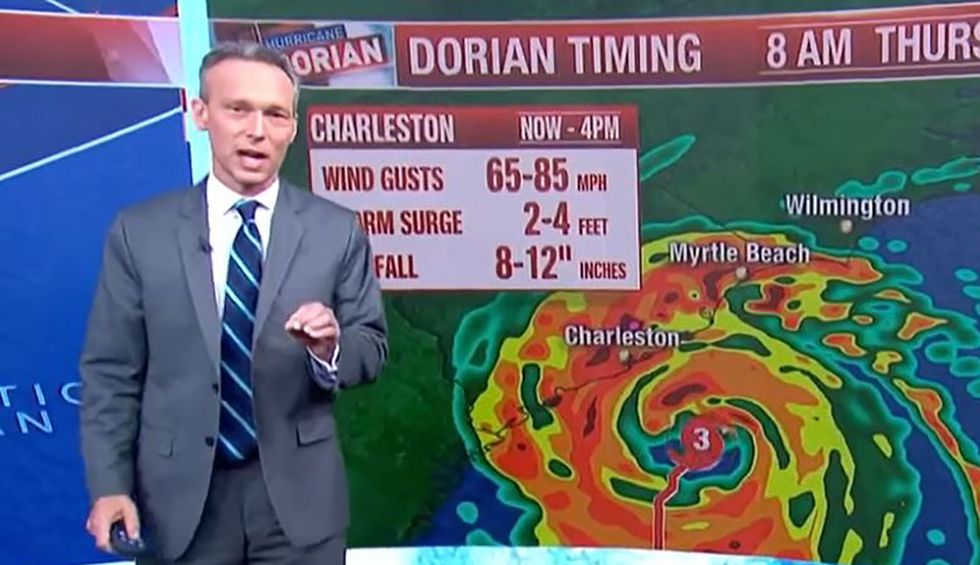 The president inaccurately claimed Sunday that the strengthening hurricane would “most likely” hit Alabama “much harder than anticipated” — and he has made a series of dubious claims, and apparently doctored a map with a Sharpie marker, to support his faulty warning.

“Let me take you into this map,” Karins said. “So Sept. 1, 8 a.m. in the morning, is when he tweeted and added Alabama to the states that are increasing in risk. That’s when this whole thing started, when that tweet came out this was the forecast, with not Alabama in it. this was the official forecast that should have been in a little document.”

Trump tweeted out another projection map, which showed a bundle of possible paths the storm might take — which did show Alabama among the states Dorian might hit — but Karins said that information was badly out of date on Wednesday, when the president shared it on social media.

“He said this was the forecast map that made him say Alabama was in the path, and these are all the computer models, the spaghetti, they even go into Louisiana and Mississippi,” Karins said. “Looks horrible, right? Then I looked closer down here and the data that was Aug. 28, four days before he sent the tweet. So then I said why would he send a map out four days in advance?”

“See, this is science — we actually do have the data,” he added. “Isn’t that amazing?”

Karins showed how the maps clarified the projections as the storm moved closer to hitting the U.S., and Alabama didn’t show up on those maps as a potential target.

Karins said the president had either told a series of obvious lies to cover up an avoidable mistake, or he had neglected his job duties for days.

“Here is your choice,” Karins said. “We can either believe the whole kindergarten, changing the number 62 to an 82 (trick), or maybe he actually did go four straight days without being briefed or looking at the updates on the hurricane, and he did believe that what he saw.”

“Which one is worse?” he added.