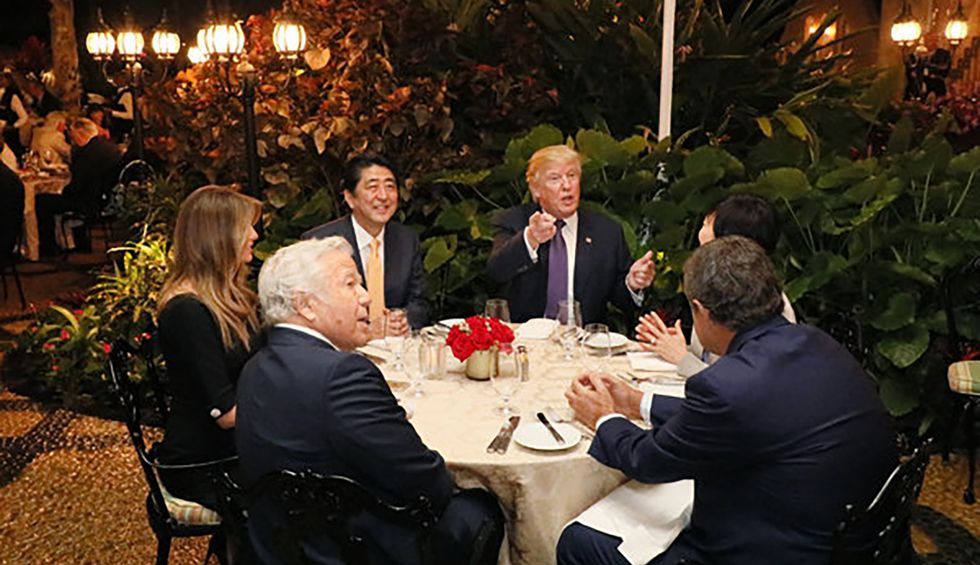 Prime Minister Shinzō Abe and President Donald Trump having dinner in Palm Beach. This work is licensed under the Government of Japan Standard Terms of Use.
Alex Henderson
September 23, 2019 Trump

In South Florida, a unit of the U.S. Marine Corps has booked its annual military ball at President Donald Trump’s Mar-a-Lago resort. But the commander of the unit, according to Newsweek, was angry after learning that it had done so.

The 4th Air Naval Gunfire Liaison Company (ANGLICO) booked the event at Mar-a-Lago to celebrate the 244th anniversary of the U.S. Marine Corps. And U.S. Marine Commandant General David H. Berger, according to two Defense Department sources who spoke to Newsweek on condition of anonymity, was upset when he found out what the South Florida unit had done.

The Miami Herald, on Thursday, reported that the unit had posted the location of the event on the events website Evensi. But as of Friday, the link for purchasing tickets had been removed.

The event posting read, “Since 10 November, 1775, United States Marines have been forged in toil, fire, and blood; we, today’s Marines, are the manifestation of nearly two and a half centuries of their sweat and sacrifice. This November, let us together express our gratitude to those who came before, honor the devotion of those who gave the full measure, and revel in the company of our brothers and sisters who live to defend the Constitution for one more day.”

Major Roger Hollenbeck, a spokesman for Marine Forces Reserve, is quoted by Newsweek as saying, “As is the case every year, birthday ball venues are explored by committee to determine the best available option. 4th ANGLICO is considering many locations for this year's birthday ball but is not yet committed to any specific venue. Irrespective of the chosen venue, no tax-payer dollars will be spent on the ball.”