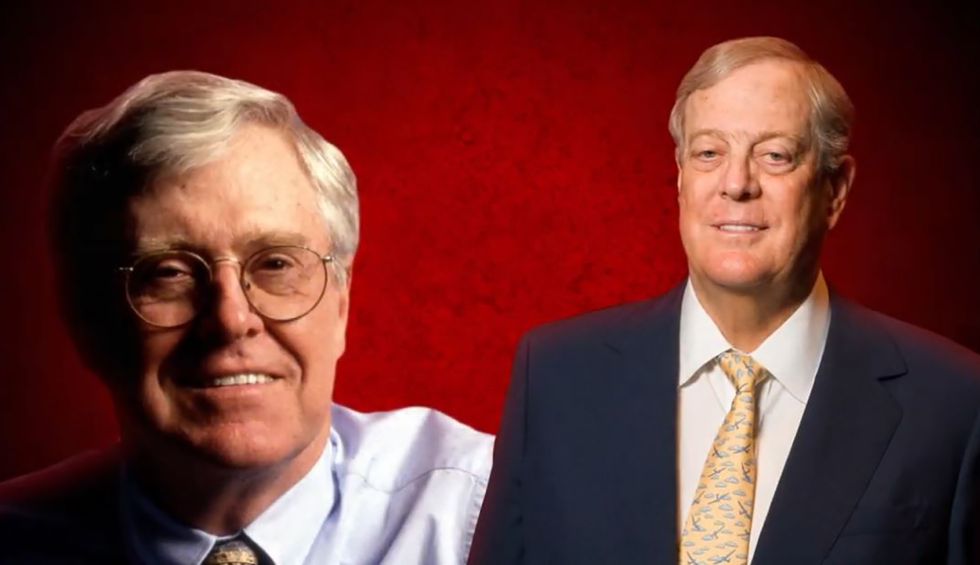 When oligarch David Koch died on August 23 at the age of 79, right-wing politics lost one of its most vocal donors in the business world. Koch, along with his brother Charles Koch, was a consistent supporter of conservative and libertarian causes. But historian Darren Dochuk, in an in-depth essay for Politico, explains that long before the rise of the Koch Brothers, there were the Pew Brothers — who had many things in common with Charles & David Koch.

Dochuk opens his article by asserting, “First, the brothers made a fortune in oil; then, they used it to attack the Democratic president eager to regulate their industry and to elect conservative candidates. They wanted to drive the moderates out of their party, and their money made sure that happened.”

It sounds like Dochuk is talking about Charles & David Koch supporting the Tea Party, trying to undermine Barack Obama’s presidency and declaring war on Republicans they believed weren’t fiscally conservative enough. But Dochuk is actually talking about J. Howard Pew and his brother Joseph N. Pew, Jr., both of whom were born in Pennsylvania in the 1880s. And their enemies weren’t Obama, but rather, President Franklin Delano Roosevelt and northeastern Rockefeller Republicans.

“From the rise of the Religious Right to the death of the moderate Republican, it’s the Pews whose fingerprints are all over the modern GOP,” Dochuk notes. “The Pews’ political ambition was driven by two bitter hatreds: of Franklin D. Roosevelt and of the Rockefeller family.”

As the Pew Brothers saw it, Dochuk explains, FDR and his New Deal were anti-business — and they believed that the Rockefeller Republicans of the 1930s and 1940s were too favorable to FDR’s policies.

The evangelical Christian Right, as we know it today, gained a lot of momentum when President Ronald Reagan was elected in 1980. But long before that, the Pew Brothers combined religion and right-wing politics in their own way.

Dochuk notes that the Pew Brothers believed that the Rockefellers’ moderate brand of Mainline Protestant Christianity “was responsible for the nation’s secular slide” and represented a “modernistic gospel.” When the Pew Memorial Trust was founded in 1948, Dochuk explains, it combined religious, political and economic elements.

In the 1950s, a new star emerged in the conservative movement: William F. Buckley, Jr., founder of the National Review. And the Pew Brothers, Dochuk points out, were among his enthusiastic supporters.

Howard Pew, according to Dochuk, “eagerly funded William F. Buckley, Jr.’s new conservatism. When, in 1955, the junior Buckley released the inaugural issue of National Review, its back cover carried several endorsements, none more glowing than Pew’s.”

Although J. Howard Pew, Dochuk observes, “channeled most of his funds to evangelical Protestant entities,” he also supported some right-wing Catholics — including Buckley. But as right-wing as the Pew Brothers were, they distanced themselves from a group that was even more to the right: the John Birch Society, who Buckley and his colleagues at the National Review were also highly critical of.

“Before his death in 1963,” Dochuk writes, “Joseph Pew would pour countless funds into Goldwater’s emerging campaign, while Howard would prove to be just as ‘overly generous’ — as a Goldwater adviser would gush in a note of thanks — in his support of the candidate.”

But while the Pew Brothers promoted evangelical Protestantism, Goldwater became a blistering critic of the Christian Right in the 1980s and had no kind words for the Rev. Jerry Falwell, Sr. or Pat Robertson. As Goldwater saw it, the Christian Right was terrible for the GOP and the conservative movement.

Dochuk concludes his essay by noting the ways in which the Koch Brothers became a 21st Century equivalent of the Pew Brothers.

“When the Koch Brothers stepped to the fore” in the 21st Century, Dochuk recalls, they championed “a Tea-Party Republicanism that called for patriotic marches on Washington” and “tapped a sentiment running deep in American history — one that the Pews had taken advantage of decades before.”