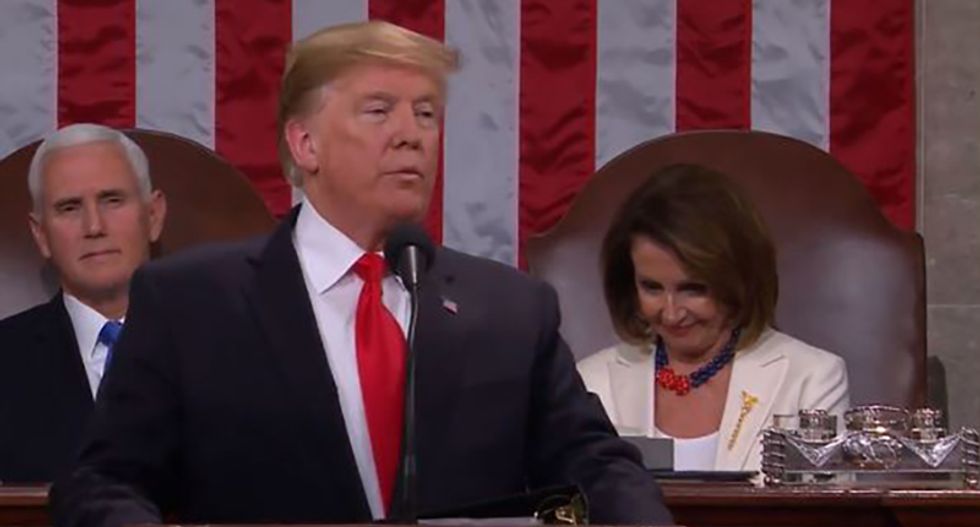 As I wrote earlier this week, with its muddled messaging on impeachment, the House Democratic leadership may have figured out a way of both demoralizing the Democratic base and firing up Trump's supporters. It's a mess.

But fairness requires us to acknowledge an important fact: Speaker Nancy Pelosi doesn't have the votes to launch an official impeachment process. And it's not close. At present, The Washington Post's tally finds 137 members of the House in favor of launching an impeachment inquiry, with 92 opposed and 6 others not taking a position. Leadership can twist arms on a close vote, but when you're close to 100 votes shy of a majority, it's impossible to whip a measure across the finish line--especially one of such consequence.

Let's also acknowledge that there is no reason to believe that anyone else would be capable of managing such a divided caucus better than Pelosi has in the present circumstances. Those opposed to an inquiry include a couple of dozen freshman lawmakers who won seats in swing districts in 2018 and fear losing them if the party were to move ahead with the process; they tend to vote as a bloc and have shown a willingness to buck leadership on far less polarizing measures.

And of course there's public opinion to consider. The latest Morning Consult/ Politico poll finds 37 percent of the public ready to impeach, 50 percent opposed and the rest unsure.

That's the state of play on September 19, 2019. The Dem caucus is hopelessly divided, public opinion is against those who want to impeach a lawless president* and it's unlikely that another Speaker could magically change these facts at present.

Having said all of that, Pelosi and her leadership team have failed, badly, in two important ways, and those failures have given Trump a sense of impunity and now risk undermining the separation of powers on which our Constitutional system rests.

First, we cannot look only at where we are now. We have to consider how we got here. When a group of moderates launched an ill-advised and ill-fated campaign to unseat Pelosi after the Dems' 2018 midterm "wave," many of us pointed to her proven ability to keep a fractious caucus together when it mattered most. At the time, a central point of reference for those of us who wanted Pelosi to lead the caucus was how she had responded to George W. Bush's push to partially privatize Social Security in 2004 and 2005. If you're unfamiliar with this episode, the short version of the story is that many moderate Democrats were eager to either cut a deal with Bush, who at that point was still quite popular, or present an alternative plan that might take some heat off their caucus (DC pundits were almost united in their support of Bush's "entitlement reform" proposal). Democratic MOCs constantly asked Pelosi when she was going to engage in this debate and she famously answered, “Never. Is never good enough for you?”

As Matt Yglesias recounted last year, "It worked. While Democrats refused to engage in the details of the debate, infighting consumed Republicans. And the fact that the whole idea was unpopular loomed larger and larger in the minds of GOP elected officials who had no particular stake in the details." Bush's bill never got a vote.

The fact is that Donald Trump has obstructed justice and abused his office in very visible ways since early on in his presidency*, when he fired FBI Director James Comey and said on national TV that he did so to quash the agency's investigation into his campaign and a number of his close associates. But rather than lay the groundwork for an impeachment inquiry, Pelosi began saying that it was a "distraction" in the middle of 2018 and has stayed on that message ever since. She might have said that Democrats had a Constitutional duty to follow the facts where they lead and only move on evidence of crimes. Nine months later, that position might have helped frame the tussle over the Mueller Report, and the multiple chargeable acts of obstruction it detailed. She might have led stubbornly on the issue, as she did with Social Security 15 years ago, but instead she bowed to public opinion.

Support for impeachment in ABC's polling dropped dramatically in the months after the Mueller report was released, from 49 percent last August to just 37 percent in April. That is at least in part a result of Democratic leaders putting the brakes on the idea.

But if we're being abundantly fair, we also have to acknowledge that Pelosi's calculus last year might have been correct. I don't believe that taking impeachment off the table helped Democrats one bit in the midterms, but it's a counterfactual. Maybe she was right, and the party wouldn't have won the House if impeachment had been a live issue last fall.

That brings us to the House leadership's second failure: Assuming that the executive branch would comply with Congressional oversight (or at least assuming that it would be politically beneficial to act that way).

After a massive mobilization delivered Democrats their biggest gain in seats in any midterm since 1974, they should have been prepared to hit the ground running, and they should have expected the regime to obstruct their efforts at every turn. They should have had a gameplan, and lawsuits ready to go.

Instead, they dithered. Republicans impeached Bill Clinton 26 days after The Starr Report dropped; Nadler's first designated impeachment hearing took place this week, six months after Mueller delivered his. Richard Neal, chair of the Ways and Means Committee, which by law can compel the IRS to turn over any citizens' tax returns, didn't make that request in January--he waited until April. Then, three weeks later, when the IRS blew off the request, he extended the agency's deadline. He didn't issue a subpoena for those returns until mid-May, and then only filed suit when Treasury Secretary Steve Mnuchin defied the subpoena in July. (Last month, they asked the Trump-appointed judge hearing the case to expedite it, but it's unlikely to be litigated before the election.)

It is the sense that Democratic leaders don't share the base's sense of urgency in thwarting Trump's obstruction and abuses of power that has frustrated so many of us, and led to this damaging intraparty divide over impeachment. If they weren't willing to go there, then they should have made it clear that they were ready to go to the mats to hold the regime accountable with the rest of their oversight powers.

Democrats won their gavels in January and wanted to project the sense that the adults were in charge again and that we might return to some semblance of normalcy, at least in the House. But these are not normal times. Their base didn't want sobriety or legal scholarship, they wanted to see that there were finally some cops on the beat and that those cops were ready to bust some heads to protect our Constitutional order.

So far, the paltry results of the Democrats' oversight activities have been demoralizing. If Nancy Pelosi shares the sense of urgency felt by most rank-and-file Dems, especially people of color and other historically marginalized groups, she's failed to show it. And as fair as we might be in looking at the big picture, that's why her leadership under Trump has been an abject failure.