Joe Biden's lies vs. the truth: He enabled the Iraq War — and still takes no responsibility for it 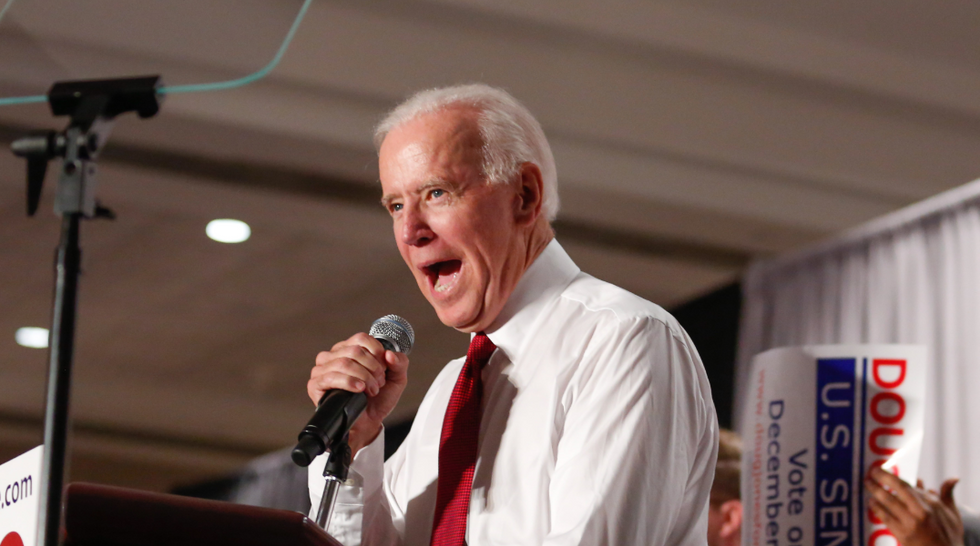 Joe Biden’s recent efforts to deny his record of support for invading Iraq are marvels of evasion, with falsehoods that have been refuted by one well-documented appraisal after another after another. This month, Biden claimed that his vote for war on the Senate floor was somehow not a vote for war. Ironically, while he was spinning anew to deny the undeniable, theaters nationwide began screening a movie that exposes the deceptive approach to the Iraq war that Biden exemplifies.

Historically factual, “Official Secrets” is concerned with truth—and the human consequences of evading or telling it. Katharine Gun, portrayed by actress Keira Knightley, was a worker at the British intelligence agency GCHQ. Risking years in prison, she did everything she could to prevent the Iraq war, and took responsibility for doing so.

Biden did everything he could to enable the Iraq war, and—still—takes no responsibility for doing so.

More than 16 years ago, Biden and Gun were at cross purposes as the Iraq invasion neared. Subterfuge vs. candor. Misinformation vs. information. War vs. peace. Today, their public voices contrast just as sharply.

Gun recalls that both President George W. Bush and especially British Prime Minister Tony Blair were “desperate to get U.N. cover” for the impending invasion of Iraq in early 2003. On the last day of January of that year, Gun saw a memo from the U.S. National Security Agency that showed the two governments were working together to wiretap and otherwise surveil diplomats from countries on the U.N. Security Council—for purposes such as blackmail—to win a vote to authorize an invasion.

Gun became a whistleblower by providing the memo to the Observer newspaper in London. As she said in a recent interview with Salon, “My intention was to prevent the war. . . . I felt there was this information that was absolutely crucial, it had the potential to derail the rush to war, and I felt people had the right to know.”

Biden—who played a pivotal role in the rush to war as chair of the Senate Foreign Relations Committee—proceeded as though people had no right to know. He excluded critical voices and key information from the committee’s high-profile hearings in mid-summer 2002, deceptively serving as the most important lawmaker ushering the war resolution to the Senate floor, where he voted for it in mid-October. The war began five months later. It has never ended.

But now, on the campaign trail, Biden is eager to scramble and rewrite history. He’s displaying the kind of disregard for facts that paved the way for the invasion of Iraq in the first place.

A basic flaw in Biden’s latest Iraq doubletalk has to do with his inversion of actual timing. Either he can’t remember when the Iraqi government agreed to allow U.N. weapons inspectors back into Iraq—or he’s so desperate to keep lying about his actual record on the Iraq war that he can’t bring himself to be truthful.

Biden is claiming that he voted for the war resolution so it would be possible to get U.N. weapons inspectors into Iraq. During the ABC debate last week, Biden said that he voted for the Iraq invasion authorization “to allow inspectors to go in to determine whether or not anything was being done with chemical weapons or nuclear weapons.” But his claim has the timing backwards.

The Iraqi government announced on September 16, 2002—with a letter hand-delivered to U.N. Secretary General Kofi Annan—that it would allow the U.N. weapons inspectors back in “without conditions.” The New York Times reported the big news under the headline "U.N. Inspectors Can Return Unconditionally, Iraq Says." That was a full 25 days before Biden voted with virtually every Republican and most Democratic senators to approve the Iraq war resolution.

I have a vivid memory of when the news of that agreement broke. I was in Baghdad near the end of a trip with an independent delegation organized and sponsored by the Institute for Public Accuracy (where I’m executive director) that included then-Congressman Nick Rahall and former Senator James Abourezk. We had just met with Iraq’s number two official, Tariq Aziz. In its coverage, the Washington Post reported on September 16: “Iraq maintains that all its weapons of mass destruction have been destroyed. The deputy prime minister, Tariq Aziz, insisted . . . that even if his government readmitted the weapons inspectors, the United States and Britain would proceed with military action. ‘It's doomed if you do, doomed if you don't,’ he said.”

Hours later, when the news came that Iraq would allow U.N. weapons inspectors without restrictions, it removed the get-the-inspectors-into-Iraq excuse for the war resolution that was then making its way through Congress. But it’s an excuse that Biden has now dusted off and pressed into service, twisting the timeline of actual events.

The congressional resolution that Biden spoke for and voted for on the Senate floor was clear, stating: “The President is authorized to use the Armed Forces of the United States as he determines to be necessary and appropriate in order to (1) defend the national security of the United States against the continuing threat posed by Iraq; and (2) enforce all relevant United Nations Security Council resolutions regarding Iraq.”

Four months later, in February 2003, at a time when Katharine Gun was anxiously waiting to see whether the NSA document that she had leaked to a British news outlet would actually be revealed to the public, Biden was proclaiming his support for the imminent invasion. He told a Chamber of Commerce meeting in Delaware: “I supported the resolution to go to war. I am not opposed to war to remove weapons of mass destruction from Iraq.”

After the invasion, Biden continued to support the war. At the end of July 2003, four months after the war began, he said in a speech at the Brookings Institution: “Nine months ago, I voted with my colleagues to give the president of the United States of America the authority to use force, and I would vote that way again today. It was the right vote then and it would be a correct vote today.”

After another year had gone by, Biden wrote a magazine article that tactically criticized how the war was being waged while still defending his role in helping to launch it: “A year and a half ago, I voted to give President Bush the authority to use force in Iraq. I still believe my vote was just—but the president’s use of that authority was unwise in ways I never imagined.”

As the Washington Post recently noted, “Not until November 2005 did Biden acknowledge that his vote was a mistake.” Even then, on NBC’s “Meet the Press,” Biden tried to shift the blame onto President Bush for turning out to be unworthy of his trust. “In hindsight,” the interviewer asked, “knowing everything you know now about the absence of weapons of mass destruction, was your vote a mistake?” Biden replied: “It was a mistake. It was a mistake to assume the president would use the authority we gave him properly.”

Only one of Biden’s opponents for the 2020 Democratic presidential nomination was in Congress at the time of the Iraq war resolution. Bernie Sanders (who I’m actively supporting) voted no.

This summer, Biden has spun out with new mendacity about the Iraq invasion. On the debate stage at the end of July, he upped the dishonest ante by claiming: “From the moment ‘shock and awe’ started, from that moment, I was opposed to the effort, and I was outspoken as much as anyone at all in the Congress.” The historical record shows that claim to be preposterous.

And backwards timing is not the only major flaw in Biden’s claim that he voted for the war resolution to increase the prospects for U.N. weapons inspectors to get into Iraq. An underlying problem with his current narrative is the reality that going to the United Nations Security Council for authorization to launch a war on Iraq was always a quest for a fig leaf to cover U.S. plans for naked aggression.

New York Times pundit Thomas Friedman was unusually candid when, on November 13, 2002—one month after Biden had voted to approve the war resolution—he wrote in a column: “The Bush team discovered that the best way to legitimize its overwhelming might—in a war of choice—was not by simply imposing it, but by channeling it through the U.N.”

It was this bogus push to supposedly legitimize the pending invasion that Katharine Gun took such a huge personal risk to expose, informing the world about the intense surveillance underway to gain illicit leverage over U.N. Security Council delegations.

“Gun’s revelation showed that the U.S. and British governments were not only lying to get to invade Iraq, they were engaging in outright violations of international law to blackmail whole countries to get in line,” Institute for Public Accuracy senior analyst Sam Husseini wrote. He told me: “The insidiousness of Biden is that he’s effectively saying that Bush should have manipulated the U.N. better.”

Overall, as he pursues the presidency, Joe Biden is persisting with dismal innovations to falsify his record on the Iraq war. In the process, he’s operating completely at odds with what the “Official Secrets” film and Katharine Gun are all about.