'Internment camps for the homeless': Housing advocates horrified by Trump's push for a 'crackdown' on California homelessness 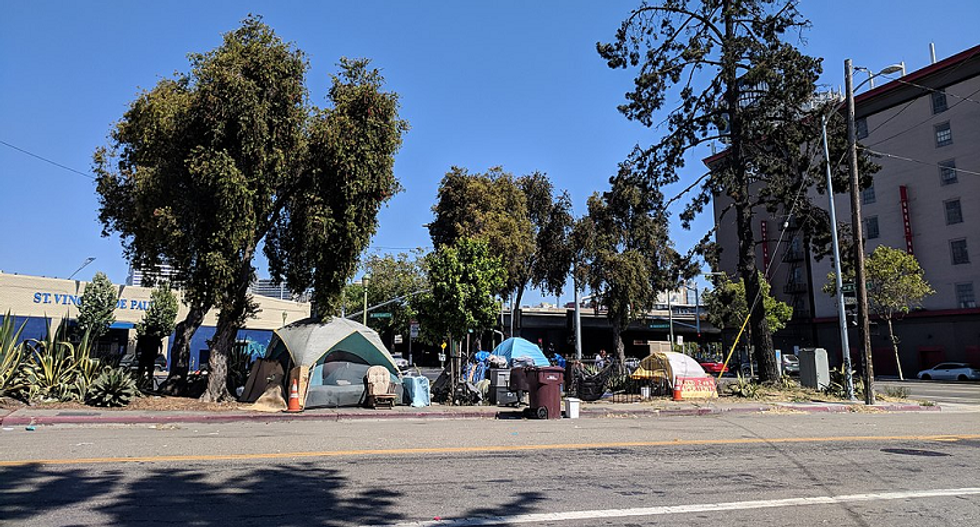 Following reports that President Donald Trump is pushing for a "major crackdown" on homelessness in California that could include destroying existing encampments and moving homeless people into government-backed facilities, state lawmakers and progressive housing advocates said the administration's proposed steps are cruel, politically motivated, and would do nothing to address the very real crisis Trump has exacerbated.

The Washington Post reported Tuesday that Trump ordered White House officials to begin work on a "sweeping effort" to address the homelessness crisis in California. As part of the new initiative, Trump administration officials from the Department of Housing and Urban Development (HUD) and Justice Department visited California this week for meetings and tours.

"Among the ideas under consideration are razing existing tent camps for the homeless, creating new temporary facilities, and refurbishing existing government facilities," the Post reported, citing officials familiar with the effort.

"Housing experts say homelessness in California has risen alongside housing and rental prices," the Post noted. "That problem has been exacerbated by cuts to federal support for housing programs."

Diane Yentel, president and CEO of the National Low Income Housing Coalition, said the early stages of Trump's effort, as well as his past policy moves, demonstrate that the White House is "clearly not acting in good faith to end homelessness."

"They've proposed drastically shrinking or eliminating federal programs that keep the lowest-income people affordably housed; tripling rents for the lowest-income subsidized residents and raising rents for all others; evicting 100,000 people, including 55,000 American children, from subsidized housing; and allowing homeless shelters to discriminate and refuse shelter to transgender and other LGBTQ people," said Yentel.

This is chilling. @realDonaldTrump wants to "crackdown" on homelessness and put people into "government facilities… https://t.co/uP62lPgFKj
— Mike Bonin (@Mike Bonin)1568143538.0

California Democrats joined the chorus condemning Trump's proposed "crackdown," accusing the president of feigning concern for homelessness for political purposes while failing to put forth solutions that would mitigate the crisis.

"The president has no interest in hearing from actual policy experts. He's just playing to his base," tweeted Rep. Ro Khanna (D-Calif.). "We need to increase Section 8 vouchers + the Housing Tax Credit to expand access to affordable housing."

"We need to get people the help they need," said Wiener, "including shelter, housing, and other services."

Nathan Click, spokesman for California Gov. Gavin Newsom, said the state is "ready to talk" if Trump is "willing to put serious solutions, with real investment, on the table."

"He could start by ending his plans to cut food stamps, gut healthcare for low-income people, and scare immigrant families from accessing government services," said Click.