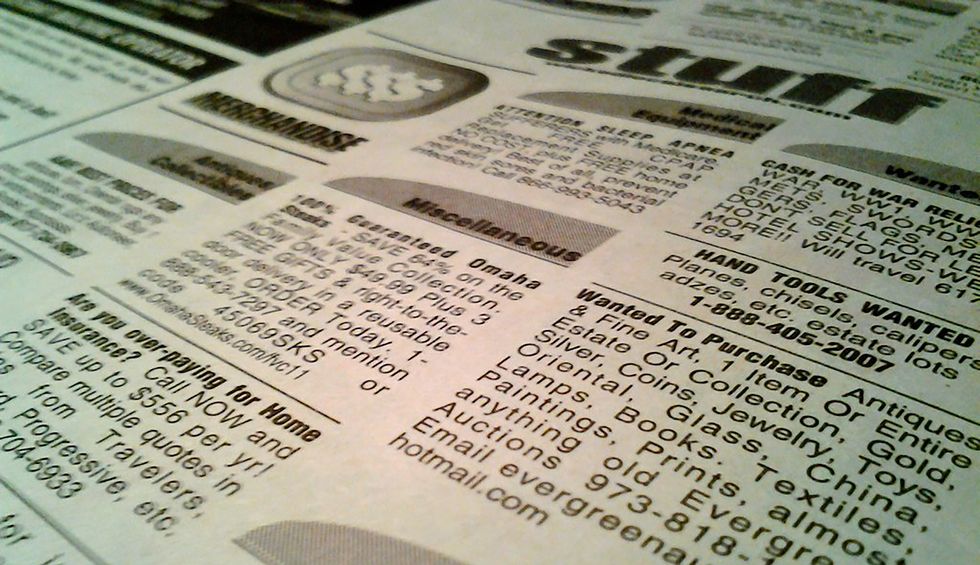 In 1984, Peter Saltas’ dad started writing and distributing free newsletters called Private Eye in Utah bars. Since bars were banned from advertising in Salt Lake, the newsletters were a way to tip patrons off about music shows and other events. In 1989, he combined the newsletters into a single publication called the Salt Lake City Weekly and joined the Association of Alternative News Media. Since then, the alt-weekly has won numerous awards and broken dozens of stories mainstream media missed. In one example, the paper revealed that not one, but two, of the state’s Attorneys General had mishandled public funds and solicited donations illegally.

“It was a big scandal in Utah,” Saltas, operations manager at the paper, tells Raw Story. “Our top lawyers misusing public resources.”

Saltas points out that they were in a unique position to break those stories, having both the resources, journalistic skills, and the desire to expose local malfeasance. It’s not likely that the local nightly news would have gone after the story.

The Salt Lake City Weekly is still free, generating revenue with ads — a model that relies on the paper getting picked up by a large number of people. Grocery stores are relied on heavily for distribution as shoppers, already in the browsing mood, might grab a paper on their way out.

But a decision by Kroger — a grocery store conglomerate with locations all over the country — threatens to upend their business model, further jeopardizing an industry that’s suffered seemingly endless setbacks in recent years, including the shut down of the Village Voice. In July, the grocery chain informed publishers across the country that they would no longer carry their papers starting September 30th. It’s a national decision, with no leeway for local stores to decide whether to keep the papers. Kroger’s reasoning is hazy, but seems to have to do with the idea that it’s a bad look for their “desired demo”—which they think is people who aren’t interested in print weeklies because they’re on their phones (Raw Story reached out to Kroger multiple times for comment prior to publication and will update the story if they respond).

On Wednesday, a group of alt-weekly publishers are launching a campaign to convince Kroger to change course. “If they do not see the light, they’ll feel the heat from their customers,” says John Weiss, publisher of the Colorado Springs Independent, in Colorado Springs, Colorado. Their message is simple: “#don’t lose, local news.”

Saltas has a message for whoever decided to drop his weekly. “Take whatever PR degree you got and shove it,” he jokes. More seriously, forcing alt weeklies to drastically reduce their pages, stop pursuing investigations, or even lay off employees or shutter completely, is bound to have a profound public impact.

“I’m really sorry to hear Kroger is doing this. The alt-weeklies have taken a lot of hits in recent years, but where they still exist, they provide an invaluable service to the local community,” political cartoonist Dan Perkins, who pens the satirical comic strip This Modern World (aka Tom Tomorrow) tells Raw Story. “My own work would not exist without the support of the alternative weeklies. It’s where my cartoon started out and thrived. They gave me a place to grow and experiment and find my own voice.”

“These are important pieces of the US social fabric,” Saltas says. “They’re not throwaway publications.”

When District Judge Hugh Clarke Jr. of Lansing, Michigan, abruptly retired in 2019, Berl Schwartz, editor and publisher of Lansing City Pulse, thought something was off. So reporters at the Pulse submitted a Freedom of Information Act request and obtained a police complaint about an alleged incident involving Clarke Jr. and a young woman. It was sordid.

“We reported that police received a complaint from two eyewitnesses who said a city judge had sex in a public bathroom with a woman who worked for a lawyer who practices before this judge,” Schwartz says.

One of the witnesses heard the woman say she had to do it because her boss told her to.

“I think it’s pretty f*cked-up I had to suck his d*ck in order to keep my job,” a witness reportedly heard the woman say. Schwartz claims that the local daily had the police report, but opted not to write about the incident.

In addition to investigative work, the Pulse does social justice reporting and also keeps readers up to date on local cultural events. “We focus a lot on people who wouldn’t otherwise get much attention,” Schwartz says. “Comfort the afflicted, afflict the comfortable! We’re a feisty paper,” he continues. “But we’re also the arts and entertainment, best events listings.”

Schwartz got his first job in a newsroom in 1966 at the Toledo Blade, because he needed the money in the summer between his freshman and sophomore years. He got a job as a copy boy (“I wasn’t very good at it”) but in the last few weeks, the editors let him do reporting. “I fell in love with it all,” he says.

He’s worked in journalism ever since. Like Saltas, Schwartz is extremely alarmed about what will happen to the Lansing City Pulse when Kroger drops distribution. He points out that their reach has actually grown in the past few years, since readers might be less willing to pay for local daily news. He notes that in 2012, their distribution in Kroger stores was 1,000 and that today it’s up to 3,000. That makes up 15 percent of the Pulse’s distribution.

“It’s going to eventually result in less ad revenue—our biggest source of revenue—because advertisers are smart, they’re not going to pay as much for fewer readers,” Schwartz says. He’s worried about having to reduce the number of pages. “We’ll have to do less local coverage, which is mostly what we fill the paper with. As Daily newspapers decline, it’s very bad for democracy … and in our market we’re the main source of government notices,” he says. The Lansing City Council passed a resolution last week asking Kroger to reconsider.

“It’s like getting hit by a truck,” he says. “Hopefully we survive it, but it’s tough these days.”

Colorado Springs is the second largest city in Colorado, after Denver. It’s the fastest growing city for Millenials, according to the Brookings Institute.

The Colorado Springs Gazette, the local daily, is owned by Clarity Media Group. CMG is a subsidiary of The Anschutz Corporation, headed by PhilipAnschutz, a multi-billionaire friendly with the Kochs. The Anschutz Corporation also owns the Washington Examiner and used to run the now-defunct Weekly Standard. For decades, Anschutz has been a huge Republican donor: In March, he donated $134,800 to theNational Republican Senatorial Committee, according to OpenSecrets.org. He’s also backed anti-LGBTQ groups, like the Alliance Defending Freedom and the Family Research Council, Billboard magazine reports.

John Weiss, the publisher of the Colorado Independent, the city’s alt-weekly, thinks his city deserves better than a single paper owned by a right-wing billionaire. “There’s a need for alternative voices in the community,” Weiss tells Raw Story. “It’s really important we have more voices in media.”

Weiss is spearheading the campaign to convince Kroger how important alternative media is to the community. They’re running a cover story this week asking readers to contact Super King—the Kroger subsidiary in Colorado—to let them know that they want to keep the weekly. Weiss hopes the campaign will make Kroger executives change their minds.

“We are being proactive,” he says, adding that he thinks Kroger just made a mistake and that he’d be more than happy to work with the company to set things right.

The paper has published countless stories over the years that Weiss is proud of. But beyond any individual story, he believes that the Independent’s coverage over the years helped change Colorado Springs into a more humane, progressive place, particularly on LGBTQ issues. In 1992, Colorado passed Amendment 2, which explicitly stated that gays and lesbians were not a protected class. That meant that any employer could refuse to hire and even fire people for being gay (it would eventually be overturned in the courts). Weiss thinks their intensive coverage of that law and subsequent material on gay rights made the city more progressive.

“Before we had hard right-wingers, now Democrats and Republicans are moderate. We’re a lot more sane.”

Given the impact his papers has had, he hopes Kroger won’t stunt their work in the future. “We just think Kroger made a mistake. We hope the campaign will catch fire and they’ll change their minds.”

[Editor’s Note: AlterNet is a member of the Association of Alternative News Media. Roxanne Cooper, AlterNet’s publisher, served as that organization’s national director of sales and marketing from 2004-2008 and currently serves on AAN’s board of directors.]