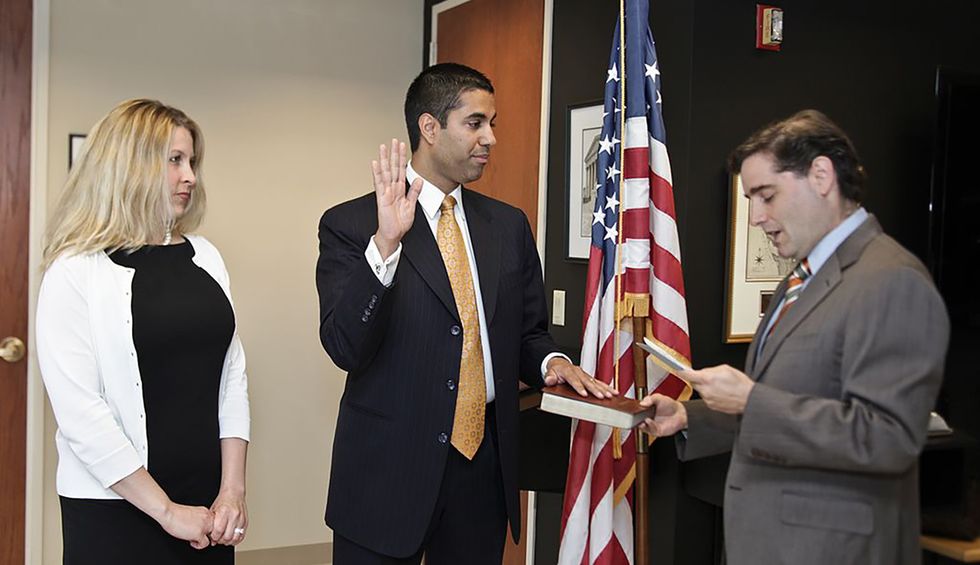 Public interest groups celebrated Monday after the U.S. Court of Appeals for the Third Circuit quashed an effort by the Republican-led Federal Communications Commission to relax local media ownership rules.

"Today's ruling is a tremendous victory for the public," Free Press vice president of strategy and senior counsel Jessica J. González said in a statement. "It admonishes the Trump FCC for its complete failure to consider the impact of its ownership policies on women and people of color."

In late 2017, the FCC voted along party lines to eliminate or weaken various rules, making it easier for companies to buy more televisions stations in the same market and killing a decades-old ban on a company owning both a newspaper and radio or TV station in the same market. As Common Dreams reported at the time, critics of media consolidation called it a "massive handout" to companies like the right-wing Sinclair Broadcast Group—which reportedly has ties to FCC Chairman Ajit Pai, who was appointed by President Donald Trump and spearheaded the overhaul.

The FCC's attempt to loosen its rules was challenged by Common Cause, the Communications Workers of America, Free Press, the Media Mobilizing Project, the Prometheus Radio Project, and the United Church of Christ Office of Communication as well as attorneys from the Georgetown Law Institute of Public Representation. In a 2-1 decision (pdf) Monday, the Philadelphia-based appeals court found that the FCC "has not shown yet that it adequately considered the effect its actions... will have on diversity in broadcast media ownership."

The decision is just the latest in a long series of rulings from the appeals court regarding the FCC's media ownership rules over the past 15 years. González noted that "this marks the fourth time this court has rejected the relentless attempts from the FCC and the broadcast industry to weaken media-ownership limits regardless of the damage such drastic deregulation would cause local communities."

The court referenced the long legal battle in its ruling Monday, which reads in part: "To avoid sounding like a broken record, we recount only in brief the history of this case up through our most recent decision. The full account of the entire saga can be found in our earlier opinions." That tidbit was among a few parts of the decision that Free Press policy manager Dana Floberg highlighted in a series of tweets Monday:

After telling the @FCC on three previous occasions to do its damn job already, the court opens Prometheus IV: "Here we are again."
— Dana Floberg (@Dana Floberg) 1569260882

Former FCC commissioner and Common Cause special adviser Michael Copps praised the appeals court for finding that with the 2017 overhaul, "the FCC used flawed data and woefully insubstantial analysis that does not even begin to consider the impact of its rule changes on diverse ownership."

"The court's decision should also put the brakes on big media consolidation," Copps said. "Since the FCC rolled back its rules, several media giants announced plans to merge seeking to take advantage of a wild west. Our democracy suffers when just a few entities own the majority of our media, and the FCC's media ownership rules are intended to prevent that from happening."

Hallelujah! How many times does the FCC have to hear from this court that it has over-stepped its bounds and dis-se… https://t.co/nfzPZn4R6N
— Michael Copps (@Michael Copps) 1569254977

González of Free Press said that "media consolidation leaves communities with far less of the local news and information people need to stay informed." She added:

Despite the growth in digital-media options, free over-the-air broadcasting remains a critical news source for people of color and low-income communities in particular. To meet the needs of these populations, the FCC must nurture ownership diversity, not let giant companies like Nexstar, Fox, and Sinclair devour even more local stations.

The FCC must now do the job it's long refused to do: properly weigh all of the evidence showing the impact of media consolidation on local communities. It's time we had real data on the agency's decades-long neglect of ownership diversity, and then policies designed to fix that problem for real. We're confident that the data will show that more media consolidation is the wrong path for creating a democratic and diverse media system.

Media Mobilizing Project executive director Bryan Mercer, who also welcomed Monday's ruling, said that "as we organize with Black, Brown, immigrant, and other communities in Philly, we see how the diversity of stories grounded in our communities builds our power."

"This decision is telling the Trump administration that it can't ignore us as it pushes regulations to enrich big companies and hurt our communities," he said. "We will build on this victory and support and expand diverse voices in our media here, and nationwide."

Alongside the public interest groups, the two Democratic FCC Commissioners also celebrated the court's decision. "This is big," Jessica Rosenworcel, who opposed the rule changes, wrote in a pair of tweets. "Now the FCC needs to go back to the drawing board and get it right."

FCC Commissioner Geoffrey Starks also took to Twitter Monday to praise the decision and share a statement in which he called for further federal research on diversity in media ownership.

"Today's opinion is clear: the FCC's approach to setting out media ownership rules needs a dramatic overhaul," said Starks. "We must recommit to our goals of promoting competition, localism, and diversity. We can no longer get by with the bad data and shoddy analysis—problems that have been highlighted far too often by courts and interested observers in recent years."

Pai, for his part, released a statement (pdf) on Monday accusing the majority of judges who have served on the appeals court the past 15 years of "blocking any attempt to modernize these regulations to match the obvious realities of the modern media marketplace." The chairman added that the FCC intends to seek further judicial review of the decision.