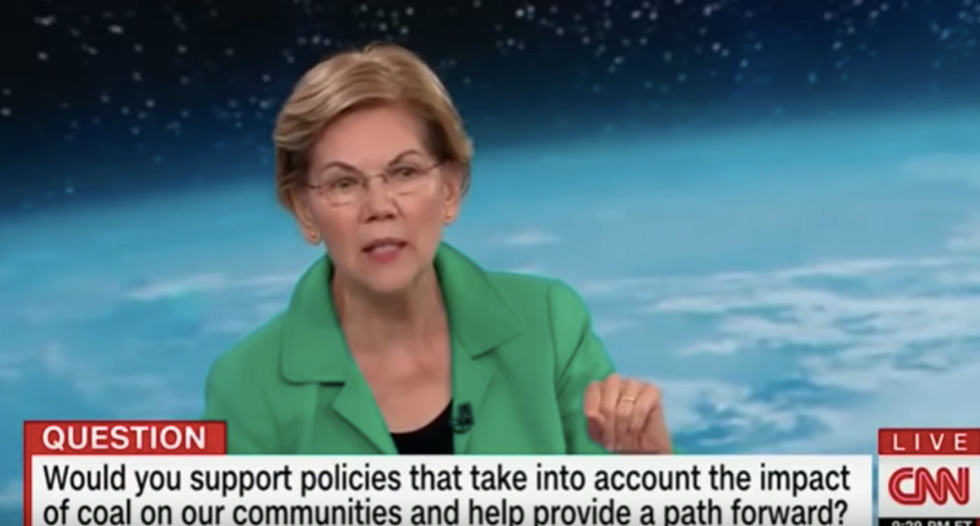 CNN’s climate town hall stretched out a full seven hours and wasn’t easily accessible for non-cable subscribers. After the DNC’s high-profile refusal to permit a climate debate, expectations for this were low. But parts of it were much better than expected… if a viewer had the patience to slog through it.

First, CNN deserves a lot of credit for giving center stage to the climate activists asking questions. From the young fellows from The Sunrise Movement and 350 to the sustainability professors to the retirees devoting their golden years to climate change, the people asking questions were sharp, informed, and -- in one notable instance -- able to bring breaking news into their questions. Where town halls often feature everyday Americans asking relatable questions, this one instead spotlighted people working to solve the climate crisis.

On the other hand, CNN’s own moderators repeatedly phrased their questions in terms of silly distractions -- plastic straws, light bulbs, and hamburgers. Perhaps the biggest applause line of the night was Elizabeth Warren calling them out. “Oh, come on, give me a break,” Warren said when asked about lightbulbs. “This is exactly what the fossil fuel industry wants us to talk about. ... They want to be able to stir up a lot of controversy around your lightbulbs, around your straws, and around your cheeseburgers, when 70 percent of the pollution, of the carbon that we’re throwing into the air, comes from three industries.”

The biggest moment of tension last night came from Joe Biden, who signed the No Fossil Fuel Money pledge in June. And yet on Thursday night, Andrew Goldman is co-hosting a fundraiser for him. Andrew Goldman is a long-term investor in liquefied natural gas and cofounder of Western LNG, with deep ties to Biden. A sharp questioner confronted Biden about it.

The No Fossil Fuel Money pledge — which Biden and all other major Democratic presidential candidates have signed — says that candidates should not take contributions over $200 from executives of the fossil fuel industry. ‘Executives’ are defined in the pledge as named executive officers in SEC filings, to provide a clear demarcation for campaigns to apply in screens and to ensure the pledge targets top executives and not the majority of fossil fuel workers.

Biden and moderator Anderson Cooper tussled about it on screen. Although Goldman is a cofounder of the LNG business, Biden’s spokesperson claims Goldman is not currently involved in the day to day operations. Biden ended up promising to review the matter, but the fundraiser is going forward.

Beto O’Rourke announced that his carbon price would be set via cap and trade, a carbon pricing system that has generally fallen out of favor but is still being used in California.

Kamala Harris, who had been conflicted on the filibuster, declared that she’d abolish the filibuster to pass the Green New Deal. And she came out firmly in opposition to fracking, joining Cory Booker, Bernie Sanders, and Warren.

Fracking is shaping up as both a simple litmus test and a part of the broader fossil fuel supply picture. Science tells us that the world must drastically curtail its production and use of fossil fuels; yet under the Trump regime the United States is now the world’s biggest exporter of fossil fuels. Bold candidates are moving well beyond the Obama “all of the above” doctrine and instead embracing the idea that America needs to manage a decline in fossil fuel production. That means starting with an end to new fossil fuel leases on federal lands. All of the Democratic candidates agreed on that.

Perhaps the strangest idea came from Andrew Yang, who stated that he would not move to restrict fossil fuel exports. The implication was that the United States would continue to extract so much fossil fuel that it would be able to export surplus production. (Booker, Sanders, and Warren would ban fossil fuel exports; the other candidates haven’t spoken.)

When Julian Castro was challenged on whether he could be trusted to end fracking when he’s previously welcomed it, he told the audience that natural gas was a bridge fuel but clarified that he thinks we’re nearly at the end of that bridge.

Meanwhile, Amy Klobuchar reiterated her support for “clean coal” -- a concept that has never been proven economically feasible, and which ignores the damage inflicted on lungs, communities, and mountaintops. Speaking in the language of Midwestern sensibility, the ideas she proposed were a return to the Obama era (return to Paris agreement, return to auto fuel efficiency standards) rather than pioneering new ideas.

Nuclear power is also a major fault line. Although many of Booker’s policies line up neatly on the left wing of the climate movement, he’s an ardent proponent of nuclear power. Sanders and Warren want to phase out existing nuclear plants and rely exclusively on renewables.

The two biggest winners of the debate: Jay Inslee and the American people. Inslee’s name was invoked almost as a blessing by several candidates. And the American people -- at least those who got inside the paywall and watched all seven hours -- are finally getting a glimpse of an authentic, ambitious climate policy.