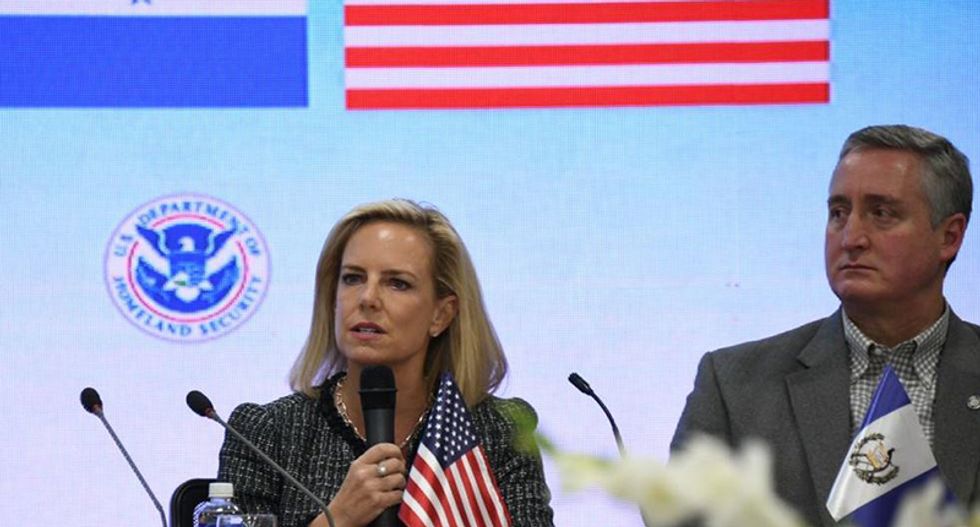 Grassroots outrage apparently led Kirstjen Nielson, the former head of the Department of Homeland Security, to bow out of the Atlantic Ideas Festival Friday—but it's unlikely to represent more than a Phyrric victory over the mainstreaming of the President Donald Trump administration.

Critics pointed to Nielsen's oversight of the department's acceleration of Trump's war on immigrants, including the administration's family separation policy.

"No one from Trump's administration should get a soft landing to sanitize their actions while supporting and pushing forward a white nationalist, fascist agenda," advocacy group CREDO Action said in a statement.

The Atlantic announced on September 17 that Nielsen would join the festival, where she would be interviewed about "the Trump administration's immigration policy, which she implemented as Secretary of the Department of Homeland Security."

The decision came under fire from progressives, who continued to criticize The Atlantic even after the company said on Twitter Friday that "Nielsen's team has let us know that she is no longer able to participate in the interview."

"Good—but she never should have been invited in the first place," wrote daily kos author Gabe Ortiz. "Nielsen's role in implementing the administration's inhumane family separation policy will be remembered as one of the darkest times in modern U.S. history."

"Glad she's not getting this platform to rehabilitate her image, but she shouldn't have ever been invited," the group tweeted.

Voter advocacy group Voto Latino took aim at Nielsen, tweeting that the former secretary isn't going to be able to rewrite her history.

"Kirstjen Nielsen, you don't get to separate families, cause long-lasting trauma to our kids, and think you can walk away scot-free," said Voto Latino. "We will not forget the harm you've caused to our community. You don't get to rehabilitate your image."

Nielsen wasn't the only former Trump official back in the spotlight this week. On Monday, former Trump Press Secretary Sean Spicer appeared on ABC's "Dancing With the Stars," leading a number of progressives and liberals alike to denounce the network. And former Trump aide Corey Lewandowski appeared in front of the House Judiciary Committee on Tuesday, where he stonewalled Democratic representatives, likely in contempt of the House—and was rewarded with an appearance on CNN the next morning. That, too, came in for criticism.

CREDO, in its statement, said that anyone wishing to launder Trump officials is on notice.

"We will continue to lean on media conglomerates and other corporations to think twice about providing a platform to people who worked hand-in-hand with Trump to separate families, lock babies up in cages, and terrorize communities of color," the group said. "Public backlash will be swift and powerful for anyone who tries to help rehabilitate the reputations of Trump's top henchmen."

However, the odds are in the favor of former Trump officials.

If the architects and boosters of the Bush administration can that easily reintegrate into American life, it's unlikely that Trump officials—to say nothing of Trump—will have any difficulty rejoining polite society after this administration is over.