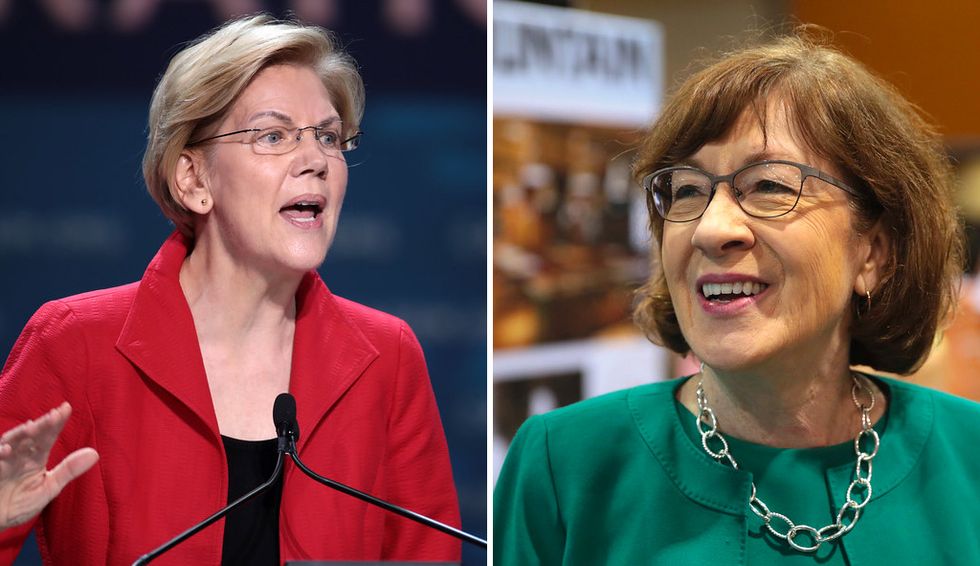 Some Democratic Party activists have been emphasizing that if President Donald Trump is defeated in 2020, a Democratic president would have a hard time getting anything done in Congress as long as Republicans, under Sen. Mitch McConnell’s leadership, still control the United States Senate. And Sen. Elizabeth Warren’s campaign manager, according to a report by the Daily Beast’s Gideon Resnick, is taking steps to increase the chances that should Warren become president, she would have a Democratic Senate and Democratic House to work with come January 2021.

Roger Lau, according to Resnick, sent out a memo on Tuesday asserting that resources should be used not only to promote Warren, but also, to promote Democrats in key U.S. Senate, U.S. House and state legislative races — and one of the Democrats Lau would like to assist is the one who ends up running against incumbent Republican Sen. Susan Collins in Maine in 2020. Sara Gideon, speaker of the Maine House of Representatives, is among the Democrats competing for a chance to run against Collins — who infuriated Democrats when she voted for the confirmation of U.S. Supreme Court Justice Brett Kavanaugh in 2018.

Collins is among the incumbent GOP senators who is considered vulnerable by Democratic strategists, along with Joni Ernst in Iowa, Cory Gardner in Colorado and Martha McSally in Arizona. In order to retake the Senate in 2020, Democrats will have to flip four GOP-held seats while maintaining all of the seats they are defending.

In the memo, Lau wrote, “We’re hiring state directors and organizers in a number of states that have primaries and caucuses in March, and we’re targeting our resources to invest in places that will be critical to keeping the House, taking back the U.S. Senate and regaining ground in key state legislatures in 2020. That includes states like Illinois and California, where Democrats won a whole bunch of House seats in 2018 in close elections that we’ll need to defend. It also includes states like Maine — which has a competitive Senate race — and Georgia, where there will be two Senate seats up for election.”

Lau stressed in his memo that if Trump is defeated in 2020, a new Democratic president would be much better off with Democrats in control of both branches of Congress.

“Remember: this election is about more than just beating Donald Trump,” Lau wrote. “He’s just the worst symptom of a corrupt system. If we want to make big, structural change, we need to make sure Democrats control the U.S. House and Senate and win important gubernatorial and state legislative races across the country.”

Lau’s memo also addressed the need for Democrats to be tech-minded going into 2020.

“It will be more digital than old-school broadcast television, and we have built an in-house staff to produce videos and ads rather than adopt the consultant-driven approach of other campaigns — and the big commissions and fees that come along with it,” Lau explained. “The campaign has three samples of the kind of footage that could be run or possibly appear in ads, which focus on Warren’s central message of corruption.”

The MyPillow guy is the heart of the ‘Big Lie’ conspiracy

'Unexpected trend' of Kemp-Warnock voters hints at the return of 'split-ticketers' in Georgia: conservative

'A day of reckoning' is coming for Donald Trump. But it might not be jail: former federal prosecutor

What happens if the maniacs win?

Donald Trump flips out on FBI after return to Mar-a-Lago: 'Didn't even take off their shoes in my bedroom!'