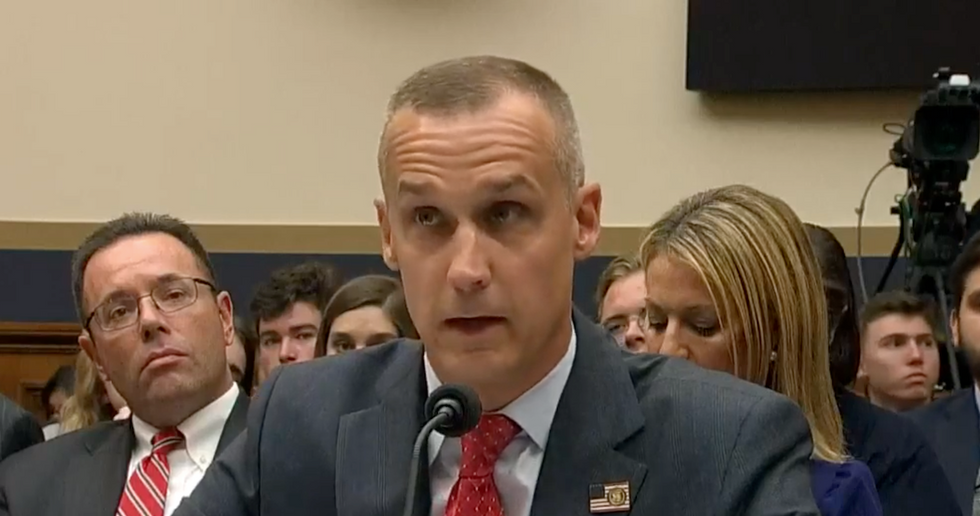 As part of its investigation into President Donald Trump's conduct related to Special Counsel Robert Mueller's investigation, the House Judiciary Committee called Corey Lewandowski — a key witness in the probe's report — for a hearing Tuesday afternoon.

But Lewandowksi — the president's former campaign manager known for aggressively manhandling a reporter in 2016 — was committed to making a mockery of the proceedings. The White House had said, on highly dubious legal grounds, that it was exerting privilege over Lewandowski's communications with Trump and that he would only directly address matters already revealed in the Mueller report. He decided to follow this direction.

Lewandowski is under no obligation to follow this direction from the White House, though, and he is, meanwhile, legally obligated to comply with the committee's subpoena for his testimony. But like so much under the administration, the Lewandowksi fight is a stalling tactic, as the White House forces Democrats to go to war over every single move in its impeachment inquiry and turns the whole affair into a circus.

The former campaign manager was particularly disrespectful in an exchange with Rep. Sheila Jackson Lee (D-TX). Lewandowski, who didn't bring a copy of the report with him to testify, immediately began trolling the committee by asking to see the exact section of the report when lawmakers questioned him about specific events it describes. Images of the relevant parts of the report were also projected on a screen in the hearing room for his convenience.

Jackson Lee focused on the incident in which Trump asked Lewandowksi, not a member of his administration, to have then-Attorney General Jeff Sessions to curtail the Mueller investigation in 2017. She asked whether he had been aware that, before Trump made this request of Lewandowski, the White House Counsel Don McGahn had refused to follow a similar order.

But Lewandowski acted as if he didn't hear the clear question, and asked her to repeat it.

She did, and then Lewandowski rattled off a pre-written answer: "The White House has directed me that I not disclose the substance of any conversations with the president or his advisers."

The lawmaker pursued forward with additional questions, but Lewandowksi just tried to give his pre-written answer again. She cut him off, moving on to another question, but Lewandowski petulantly and ridiculously insisted that he be allowed to finish his pre-written response — one he had already given.

"Congresswoman, I'd be delighted to answer your question or you could just have a conversation by yourself, but if you'd like to ask me a question, I'll be happy to answer it," he said snidely.

"Well, then don't ask me a question if you don't want to hear my answer," Lewandowski sneered. Again, he was demanding his right to give a legally dubious non-answer.

Jackson Lee moved on to ask a question directly from the Mueller report, and instead of just answering directly, Lewandowski again acted like a stubborn child.

"Uh, you're welcome to be stalling," she said. "And I'm not going to be stalled. You either answer the question yes or no."

He continued to be unresponsive, and Jackson Lee lashed out: "You are obviously here to block any inquiry into the truth or not of this administration. ... The president cannot hide behind you any longer, and you should be here to be telling the truth to this House committee because the truth will set you free and the American people!"

Watch a clip of the exchange below: