Confirmed: Trump lies to reporters more often than he lies to any other group 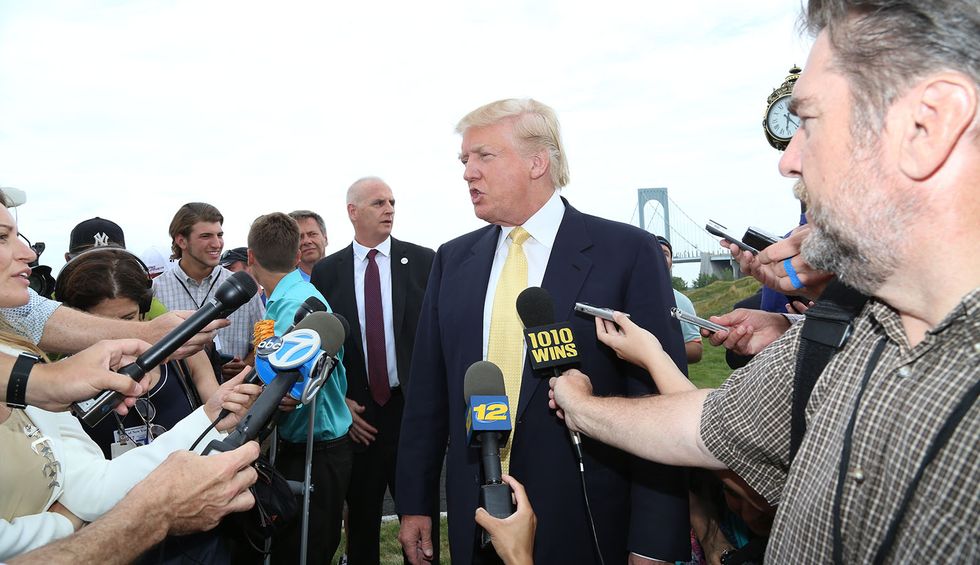 Press advocates scored an important legal victory this week when a U.S. District Court judge ordered the White House to reinstate media credentials to reporter Brian Karem, whose access had been stripped away by Donald Trump's team after a dust-up during a Rose Garden ceremony in July. There, former Trump aide Sebastian Gorka called Karem a "punk." Announcing that the White House hadn't provided Karem with due process when it stripped him of his credentials, the ruling marked the second time the White House has tried and failed to give a reporter the boot. (CNN's Jim Acosta was the previous target.)

That's the good news. The bad news? Karem is returning to what has largely become a useless White House beat. Permanently stuck in reactive mode as they respond to Trump's catalog of bizarre and untrue pronouncements, journalists have largely become spectators at 1600 Pennsylvania Avenue.

What's left for the White House press corps to do often resembles a journalistic joke. The daily press briefings have been effectively cancelled, which means White House reporters have extremely limited access to officials who are willing to answer even the simplest questions about the administration's policies and agenda. Meanwhile, the so-called White House sprays, where reporters are marched into a room and encouraged to shout questions at Trump (who then lies about everything), are relatively pointless. And that goes for the ritual of yelling questions at Trump while he stands near the whirling blades of a Marine One helicopter on the White House grounds as well.

In both cases, Trump simply uses reporters as props so they'll record his avalanche of lies and then air those lies on a televised loop all day. The so-called Chopper Talk sessions in particular allow Trump to simply bluster and ramble through questions that clearly stump him. And because the sessions are strangely covered as breaking news, Trump's lies are instantly amplified by the press, often without reporters providing proper context for them. The Marine One shoutfests "are terrible for reporters," one White House reporter recently conceded to Politico. "It is impossible to hear, have a substantive dialogue, ask a follow-up question or do any serious pressing of the president. It is a fucking circus."

Now comes confirmation that Trump spends more time lying to reporters in those gaggle settings than he does to any other group of people that he regularly interacts with in public. And yes, there's something deeply ironic and disturbing about the fact that Trump lies to reporters more than anyone else, yet they're the one group that won't accurately label him a liar. The truth is that the press has never figured out how to cover a president who's a pathological liar, and I suspect they never will. And when I say "figured out," I'm really saying the press has never summoned the institutional courage necessary for the task.

Tracking every lie (aka "falsehood") that Trump told between July 8 and Aug. 18, CNN concluded that he averaged nearly eight fabrications every day. The biggest whoppers during that period were that China is paying for the trade war tariffs (they're not), which Trump repeated 10 times, and that Democrats want to eliminate all immigration laws concerning America's borders (they don't), which Trump claimed 14 different times.

What was especially telling from the CNN research was the forum where Trump told the most lies during that six-week stretch. "The top venue, with 94 false claims, was his exchanges with reporters," CNN reported. The venue that featured the second-highest number of Trump lies was the political rallies that he holds.

Why so many lies told directly to the faces of reporters? Because Trump in recent weeks has spent lots of time talking to journalists, hosting various Chopper Talk sessions that ranged from 17 minutes to 33 minutes in duration. And when Trump talks a lot, he lies a lot—period. "There is a strong correlation between how much Trump talks and how many false claims he makes," CNN noted diplomatically.

CNN's findings confirm recently released research that showed Trump much prefers granting reporters “access” while questions are yelled in a chaotic setting. According to the data compiled by Martha Joynt Kumar, director of the White House Transition Project at Towson University, the shouting sessions make up 60% of Trump's interactions with reporters, compared to just 17% of Barack Obama's. To date, Trump has stopped more than 80 times for Q&A shout sessions while departing from or returning to the White House aboard Marine One, or on the tarmac before getting on or off Air Force One.

The White House has pointed to these shout sessions as proof that Trump's delivering all kinds of access. Press secretary Stephanie Grisham recently bragged that Trump is “so accessible” that she doesn’t “know what any of the press could complain about." It turns out what they could complain about is Trump using access he grants to the press to lie to them nonstop.

The CNN confirmation of Trump lying most often to reporters arrived the same week he unveiled perhaps the most ridiculous and moronic lie of his presidency—or least of the past month. That's when Trump’s White House took a Sharpie marker to an official government map of the projected course of Hurricane Dorian, and enlarged the path's possible cone to include Alabama. It was a pathetic and childish attempt to bolster his earlier, reckless assertion that Alabama was ever in danger from the storm, a claim that the National Weather Service aggressively debunked.

Trump lies about everything. Always. And that’s especially true when he grants access to reporters.