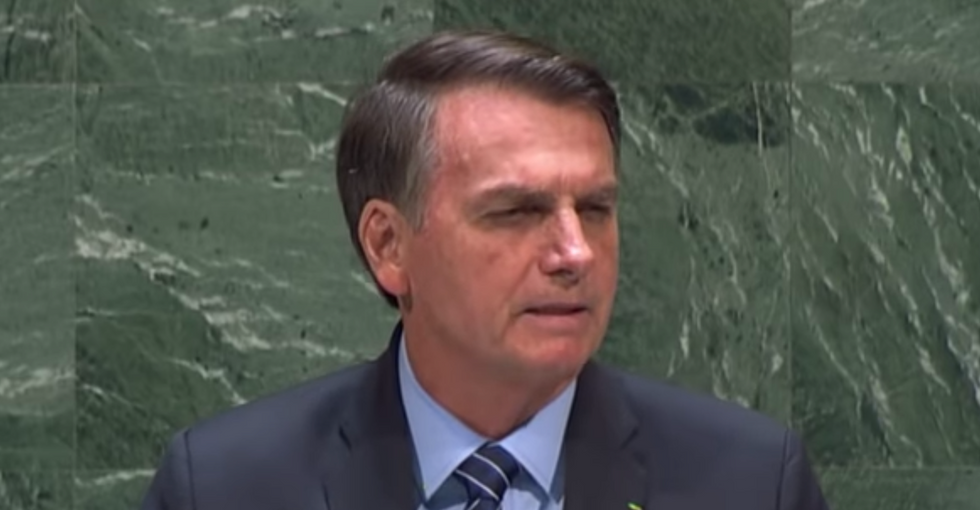 Brazilians and environmental advocates around the world responded with outrage to a speech that Brazil's far-right President Jair Bolsonaro gave Tuesday to the United Nations General Assembly that included what one reporter described as "a cantankerous and conspiratorial defense of his environmental record."

Márcio Astrini, public policy coordinator at Greenpeace Brazil, declared Tuesday that "the president's speech about the environment was a scam."

"Bolsonaro is trying to convince the world that he is protecting the Amazon, when in reality he is promoting the dismantlement of the environment," Astrini said. "Under his management, burning, deforestation, and violence have increased outrageously. For the forest and its people, Bolsonaro is a problem, not the solution."

Bolsonaro's first speech (pdf) to the U.N. since he took office in January came amid mounting global criticism over this past summer's surge in deforestation and corresponding fires in the Amazon rainforest, the majority of which is located in Brazil. The ongoing destruction has provoked worldwide protests and calls for international intervention from some environmentalists and other world leaders—notably, French President Emmanuel Macron.

In Bolsonaro's address delivered in Portuguese Tuesday, the Brazilian leader took aim at foreign governments, NGOs, and the international media that have sounded the alarm about the burning of the Amazon.

"First of all, my government is solemnly committed to environmental preservation and sustainable development, to the benefit of Brazil and the world," Bolsonaro claimed, noting that "Brazil is one of the richest countries in the world in terms of biodiversity and mineral resources."

All countries have their issues. However, the sensationalist attacks we have suffered from much of the international media due to the Amazon fires have aroused our patriotic sentiment.

It is a misconception to state that the Amazon is a world heritage; and it is a misconception, as scientists attest, to say that our forest is the lung of world. Resorting to these fallacies, some countries, instead of helping, have followed the lies of the media and behaved disrespectfully, with a colonialist spirit.

They have questioned what is most sacred to us: our sovereignty!

The Brazilian president added that he is "especially grateful" to U.S. President Donald Trump for respecting Brazil's sovereignty and claimed that "unfortunately, some people, both inside and outside Brazil, with the support of NGOs, insist on treating and keeping our natives as cavemen." Bolsonaro promised that his government "will not increase its already demarcated Indigenous lands to 20 percent, as some heads of state would like to see happen."

As The Guardian reported Tuesday, "In an attempt to portray himself as a friend of Brazil's Indigenous communities Bolsonaro invited a rare indigenous supporter, Ysani Kalapalo, to attend his address and donned an Indigenous necklace after arriving in New York."

Sônia Guajajara, head of the Brazilian Indigenous People's Association and one of the country's best-known Indigenous leaders, criticized Bolsonaro for the stunt.

"This is an attempt to trick the world and show he has support. But... it is another of his big lies," Guajajara told The Guardian. "It doesn't matter what image he wants to project. What matters are his actions—which the world whole is seeing."

"He wants to deliver our land for exploration, and we will never abide by this position," she said. "The Indigenous movement across the five regions of this country do not agree with Bolsonaro's politics. We will continue fighting, opposing and making ourselves foes of this government."

Brazil's former Environmental Minister Marina Silva, who oversaw a significant reduction in deforestation in the 2000s, told the Post that "it is unfortunate, worrying, and very sad to see Brazil, which was once a protagonist in the environmental agenda, deny the reality of the grave problem of deforestation."

"Only someone completely deranged and delirious can negate that which the eyes can see," Silva added.

The Brazilian Climate Observatory concurred in a statement Tuesday.

"As expected, Bolsonaro's speech at the United Nations has doubled down on division, on nationalism and on ecocide," the observatory said. "The president has once again embarrassed Brazil abroad by giving up the country's long-standing leadership on the environment for the sake of ideology."

"Bolsonaro's policies bring an immediate risk to all humankind," the observatory warned. "Science warns us that we have until 2030 to cut carbon emissions by 45 percent if we want to have a standing chance of stabilizing global heating at 1.5°C, thus avoiding its worst impacts. Runaway deforestation both in the cerrado and in Amazonia can, alone, blow the global target."

Reporters highlighted factual issues with Bolsonaro's 30-minute address and noted that it could have repercussions for diplomacy. The Guardian's Tom Phillips tweeted, "Even in their worst nightmares, I'm not sure Brazilian diplomats will have imagined a Bolsonaro [U.N. General Assembly] speech so arrogant, so bile-filled, and so truly calamitous for Brazil's place in the world."

As Scottish foreign correspondent Andrew Downie put it, "Well, speeches to the U.N. don't get crazier than that."