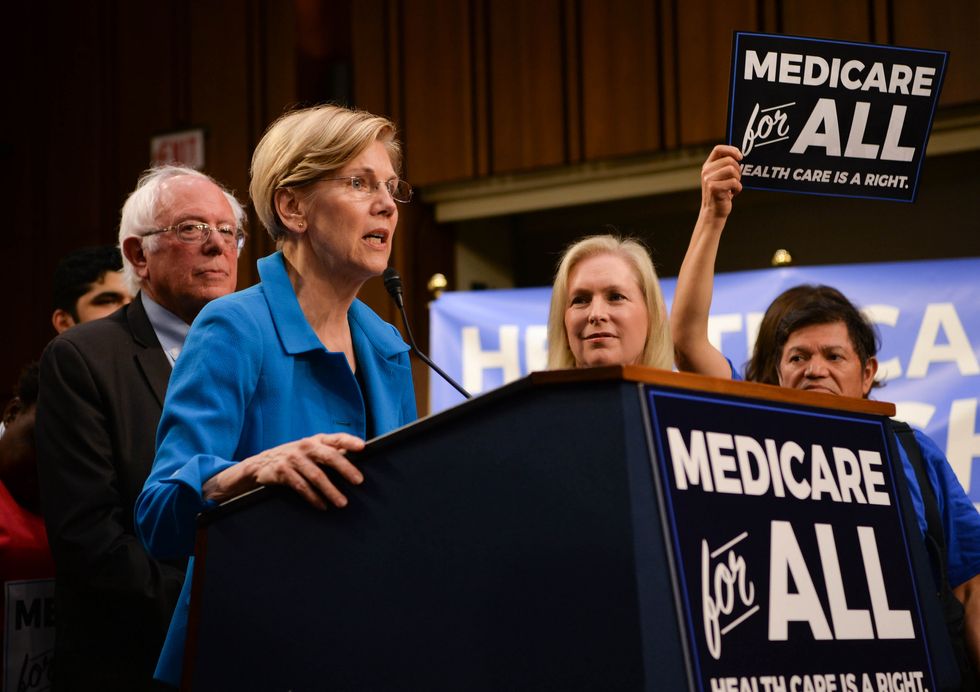 Bernie Sanders and Elizabeth Warren have managed to keep their competition for the Democratic presidential nomination cordial thus far, consistently occupying the second and third positions in public polling behind frontrunner Joe Biden. A surprise announcement this week, however, threatens to rock the unspoken alliance and has exposed what is a growing rift in the progressive base, one with likely ripple effects on next year's eventual general election against Donald Trump.

Recall that in 2016 there was a bitter Bernie-or-bust movement that threatened to derail Hillary Clinton’s path to the Democratic nomination. But while many of Sanders' disgruntled delegates protested both inside and outside that year’s Democratic convention in Philadelphia, Sanders himself plainly and clearly endorsed Clinton after a long and contested primary battle. Much of the conversation surrounding Warren’s 2020 campaign is starting to sound an awful lot like that which surrounded Clinton in 2016.

Primaries are supposed to be a contest of ideas, not a place to smear good-faith opponents. But many of the attacks on Warren — and proxy attacks on her campaign, supporters and surrogates — seem to fall into that latter category. Some Sanders supporters seem to have trouble contending with the fact that with Warren in the race, Sanders isn't simply entitled to endorsements from the left — he must earn them.

Enter the Working Families Party. The progressive group, which identifies as a left faction within the Democratic Party, endorsed Sanders in 2016 — but only after it launched an unsuccessful effort to draft Warren into the race. This year, with Warren a declared candidate, they made their support of the Massachusetts senator official.

“Senator Warren strikes fear into the hearts of the robber barons who rigged the system, and offers hope to millions of working people who have been shut out of our democracy and economy,” Maurice Mitchell, the WFP national director, said in a statement. “Our job now is to help Senator Warren build the mass movement that will make her transformational plans a reality.”

According to the group, Warren defeated Sanders in a vote of WFP members and leadership, earning 61% compared to Sanders’s 36%. But that verdict isn't quite as clear as it sounds. Curiously or otherwise, WFP has so far declined to provide a breakdown of the votes — as it did following the 2016 endorsement when 87% of the members voted for Sanders.

In the WFP's ranked-choice voting system, the party's national committee, which consists of 56 people, has equal weight with the party's members and grassroots supporters, who number in the thousands. We simply don't know whether the leaders outvoted the members in picking Warren, although it's entirely plausible.

“They won’t release the member vote because they don’t want to release it. If they wanted to release it, then they would, as they have in years past,” Matt Bruenig argued in Jacobin. His back-of-the-envelope math suggests that WFP members largely supported Sanders while the leadership overwhelmingly backed Warren, although that's no more than an educated guess.

Editors at Jacobin, which is openly socialist in orientation, argued that with this murky endorsement of Warren, the WFP “Has Written Itself Out of History,” speculating that the organization has “something to hide,” and that its “members were likely divided between Warren and Sanders.”

“If the WFP views bottom-up organizing, of and by a multiracial working class, as a core necessity to win social change, why would the party endorse Warren, whose campaign has catalyzed neither — especially over Sanders, whose campaign has?” wrote Bhaskar Sunkara, the magazine’s founder and managing editor. He was referring to data suggesting that Sanders supporters are highly diverse and likely to hold working-class jobs, while Warren supporters tend to be affluent, highly educated and predominantly white.

The WFP’s decision to endorse so early in the campaign season is also somewhat curious. It did not endorse Sanders until December of 2015, only a few weeks before the first primary voting.

Several Sanders supporters also pointed to WFP’s most recent endorsements of establishment Democrats over progressive insurgents to argue that the group is out of touch with the left. Infamously, WFP endorsed incumbent Rep. Joe Crowley in his 2018 primary race against the then-unknown Alexandria Ocasio-Cortez. Its endorsement of actress Cynthia Nixon’s primary challenge against New York Gov. Andrew Cuomo caused a major split within WFP, which then endorsed Cuomo in the general election.

It's debatable whether WFP remains a bellwether of progressive politics. But there's no question it has picked the progressive who is currently surging in the 2020 race.

Warren has made significant gains recently in perceived electability, with the share of voters who think she could defeat Trump increasing from 39 percent to 55 percent in the past three months, according to polling by CBS/YouGov. According to another YouGov poll of 2020 Democratic candidate favorability, among Democratic primary voters, Warren beats Sanders by nearly 20 points.

She also beat Sanders 40 to 20 percent among very liberal voters in a Quinnipiac poll from August, when 32 percent of Democratic respondents said that Warren had the best policy ideas in the primary race — nearly twice the share who said that of Sanders. At the moment, Warren appears to have a much easier path to the nomination than Sanders does. But it's still four months until actual Democrats vote, and the battle for progressive hearts and minds is only starting.