'We will have her back': Jewish constituents rally behind Rashida Tlaib amid Trump attacks 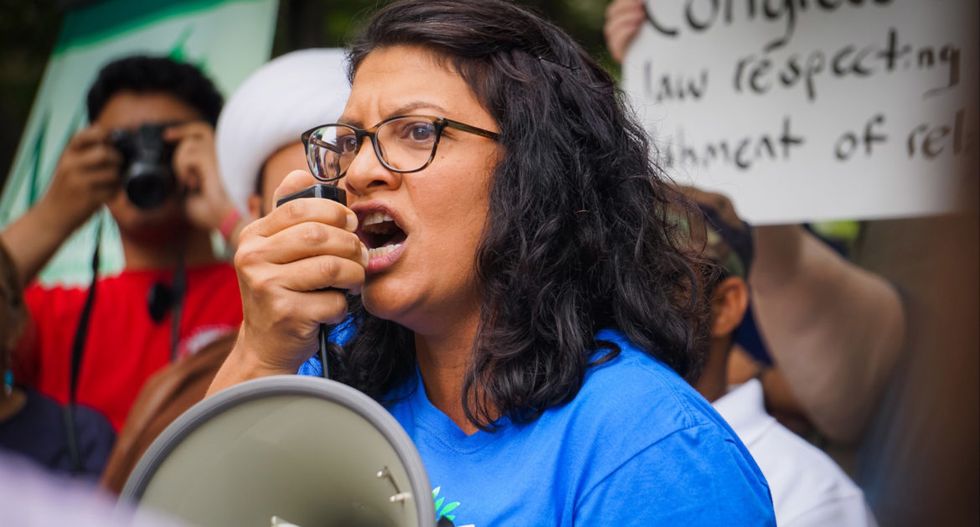 "I can't wait to show my grandmother how I was supported by all of you—it would bring her so much joy," said Tlaib, who attended a rally organized by Jewish activists Friday night.

Dozens of Rep. Rashida Tlaib's Jewish constituents rallied in Detroit Friday evening during Shabbat to show solidarity with their congresswoman as she faces attacks from President Donald Trumpover her refusal to visit Israel under the Netanyahu government's restrictive conditions.

Beth Miller, government affairs manager for Jewish Voice for Peace (JVP) Action, which organized the event, applauded Tlaib's courage and said it is "heartbreaking that Rashida had to spend this evening with us instead of her beloved family."

"And it's enraging that the Israeli government would hold a member of Congress's family hostage unless she agrees to censor herself," said Miller. "For as long as it's existed, the Israeli government has forced these kinds of heart wrenching and impossible choices on Palestinians. It's time for all of us to insist our elected officials hold Israel accountable."

Tlaib, who attended the rally Friday night, fought back tears as she thanked her constituents for their support.

The rally came as Trump launched a dehumanizing Twitter attack against Tlaib and her 90-year-old grandmother and accused the Michigan congresswoman of orchestrating a "setup" by refusing to visit Israel.

The Israeli government, with the enthusiastic support of Trump, initially barred both Tlaib and Rep. Ilhan Omar (D-Minn.) from entering the country. After backlash, Israel decided to grant Tlaib permission to visit her grandmother, but the Michigan Democrat ultimately refused to accept the condition that she refrain from expressing support for boycott activities.

"Being silent and not condemning the human rights violations of the Israeli government is a disservice to all who live there, including my incredibly strong and loving grandmother," Tlaib said in a statement. "This type of oppression is painful for all humanity, but it is especially painful for me personally every time I hear my loving family members cry out for the freedom to live and the right to feel human."

Tlaib's Jewish constituents on Friday vowed to continue supporting their congresswoman as she speaks out against the oppression of Palestinians.

"We know what Rashida's values are, because she has served our community so well for years—during her three terms in the Michigan legislature and now in Congress," said JVP supporter Barbara Harvey. "This community remembers her love for all of us and her passionate commitment to us and to justice for all. We will have her back as long as she is willing to serve."