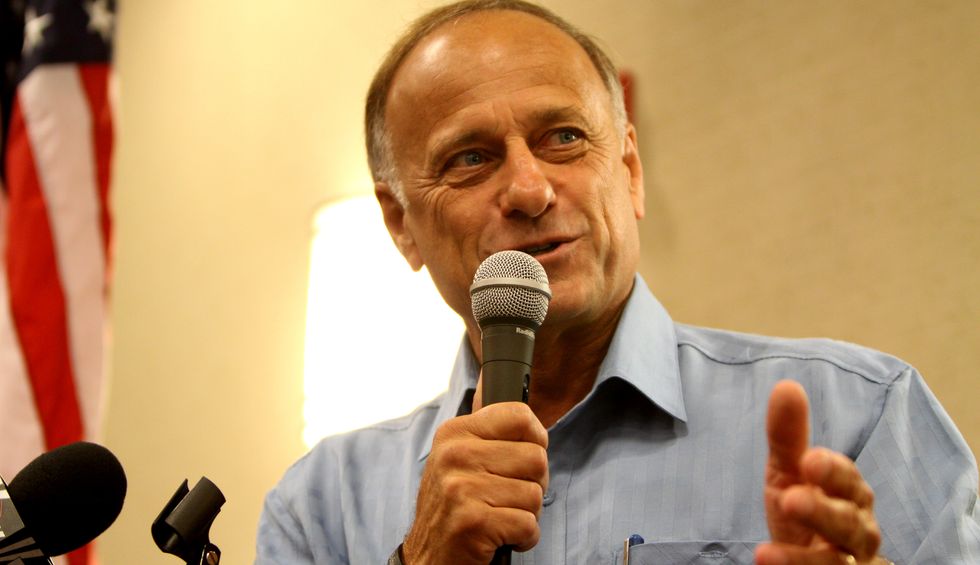 Like a band whose time has come and gone, going from playing full stadiums under the brightest lights to struggling as the opening act at the local amusement park before an audience of two, Rep. Steve King (IA-04) held the saddest town hall of all time. Reuters photographer Brenna Norman was there to capture what should be one the of the final humiliating chapters of Steve King’s congressional career.

In all fairness though, how many constituents get this kind of one-on-one time with their representative, eh? This woman had the deplorable thoughts of Steve King all to herself.

This town hall in Grundy City, Iowa came after King’s anti-choice comments about rape and incest went viral this week.

"What if we went back through all the family trees and just pulled out anyone who was a product of rape or incest? Would there be any population of the world left if we did that?" King asked a crowd at the Westside Conservative Club. “Considering all the wars and all the rapes and pillages that happened throughout all these different nations, I know that I can't say that I was not a part of a product of that."

It’s pathetic to think Republicans sought this man’s endorsement in 2016. He’s been spewing racist and misogynistic comments throughout his career in Congress, but it wasn’t until he began sharing white nationalist views on Twitter that his colleagues finally began to turn on him. King was stripped of all his committee assignments, leaving him virtually powerless in Congress. Even some Republicans have called for him to resign. Of course, his colleagues could vote to expel him if they wanted to, but no Republicans have showed the courage to lead such a movement thus far.

I’d encourage you to learn more about Scholten and how to help his campaign here.

Right-wing justices should be impeached for lying under oath: Alexandria Ocasio-Cortez