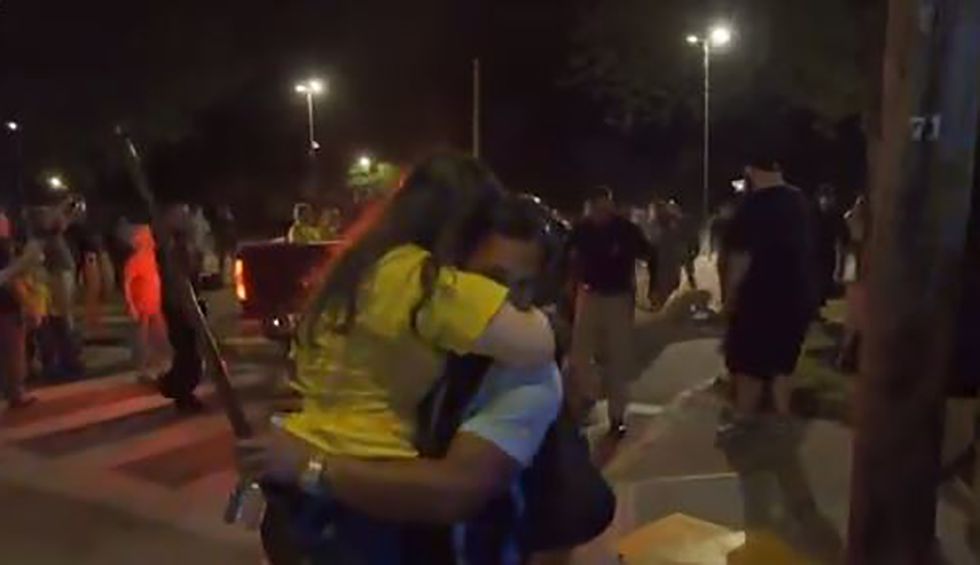 A video that has gone viral on social media shows a group of protestors sitting peacefully across a road in front of Rhode Island’s Wyatt Detention Facility Wednesday night, chanting for the release of about 120 immigrants. A black pickup truck approaches, honks, briefly stops, then runs into the crowd. Children and one person in a wheelchair were part of the protest, organizers say.

“It was terrifying because we didn’t know what exactly his intention was,” said Amy Anthony, a spokesperson for Never Again Action told The Washington Post. “It certainly appeared he was trying to hit us.”

Several protestors were injured and taken to a hospital for treatment. None of the injuries were severe.

“The driver, protesters say, was a correctional officer employed by the privately run facility who was wearing a badge and a uniform — an assertion backed up by video of the incident,” The Washington Post reports.

Local police did not arrest the driver, and in fact took no action at all, according to Anthony.

The driver was allowed to walk into the prison, while prison guards were allowed to pepper spray the protestors.

“If this is the way this correctional officer is behaving in public when people are recording, it’s not hard to imagine the behavior is much worse behind the walls in the facility where no one can see what is happening,” Anthony noted.

The Wyatt Detention Facility is a publicly-owned but privately-run prison facility that contracts with various government agencies, including ICE, to detain prisoners.

It is unclear if private prison guards have the legal right to pepper spray protestors exercising their First Amendment rights.

On its website Never Again Action says it is “a mass mobilization of Jews who are organizing to shut down ICE.”

They also say, “We’ve been taught the signs by our ancestors. As our government runs concentration camps, and rounds up and cages our neighbors, we are called to speak out: #NeverAgainIsNow.”