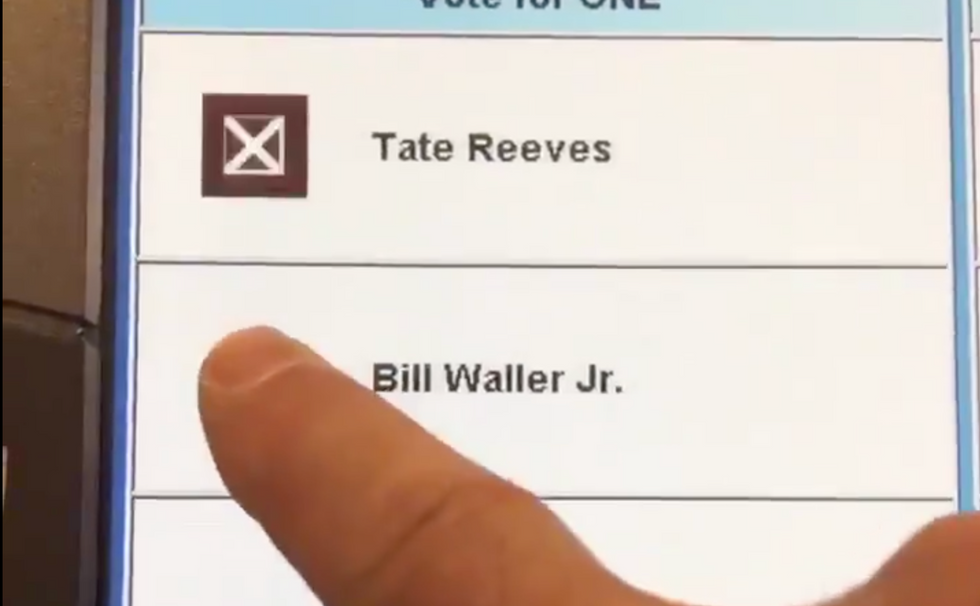 A viral video showing a voter in Mississippi attempting to cast a vote in the state's Republican gubernatorial primary on Tuesday had been retweeted more than 10,000 times by Wednesday morning, as voting rights advocates pointed to the video as evidence that a return to paper ballots would make U.S. elections far more secure.

The voter in the video was shown trying to click the box next to retired state Supreme Court Justice Bill Waller Jr.'s name on the touchscreen of an electronic voting machine, only to have an "X" appear next to Lt. Gov. Tate Reeves's name.

"It is not letting me vote for who I want to vote for," the man said in the video.

The voter was one of more than a dozen people in Mississippi who reported machine glitches when they tried to vote. At least three machines in two counties were confirmed to be malfunctioning on Election Day, with unconfirmed reports in seven other counties.

The changed votes may not have been enough to swing the election in favor of Reeves, who was announced the winner after capturing 54 percent of the vote, compared with Wallers' 46 percent.

But the malfunctions were more than enough to cause deep concern among voting rights advocates about inaction, especially by Senate Majority Leader Mitch McConnell (R-Ky.), on ensuring election security.

Florida banned touchscreen voting machines in 2007 after an election controversy. These machines should not be used… https://t.co/54aIHGAbc3
— Marc Caputo (@Marc Caputo)1566957355.0

In July, critics on Twitter dubbed McConnell "Moscow Mitch" after he blocked the Senate from considering a bill which would invest in boosting election security and called such efforts "highly partisan."

The reports of the machine malfunctions in Mississippi come two weeks after the Brennan Center for Justice released a study advising that U.S. election officials "should replace antiquated equipment, and paperless equipment in particular, as soon as possible."

On Monday, the National Election Defense Coalition, Electronic Privacy Information Center, R Street Institute, and Public Citizen called on Congress to hold hearings about election security and the use of electronic voting machines, noting that in addition to the possibility of technical glitches, "voting system vendors have operated with little oversight and no regulation for decades."

"Given the gravity and urgency of this issue, we write to you to urge the committees to hold a hearing on election system security featuring sworn testimony from officers of the voting system vendors to shed more light on their practices which directly impact the security of the nation," wrote the groups.

Mississippi is one of eight states that are expected to still use voting machines that involve no paper ballots during the 2020 election. New Jersey, Texas, Louisiana, Tennessee, Kentucky, Illinois, and Kansas will also likely still use the machines, which experts say are vulnerable to hacking and malfunctions.

"A significant number of voters may not have a paper record of their vote in 2020," the Brennan Center reported. "We estimate that as many as 12 percent of voters will vote on paperless equipment in November 2020."