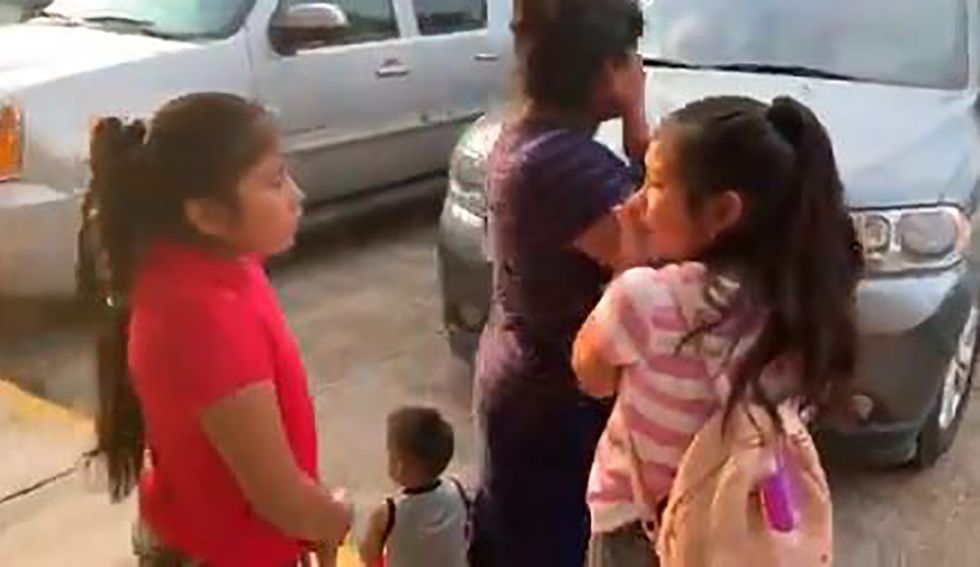 Heartbreaking images and videos of weeping children and loved ones spread rapidly on social media Wednesday night after Immigration and Customs Enforcement arrested nearly 700 workers at several Mississippi food processing plants in a series of coordinated raids that were described as "the largest single-state workplace enforcement action in U.S. history."

Mississippi's local WJTV reported following the ICE raids that "many children of those arrested across the state are now left homeless with nowhere to go."

"These children," WJTV reported, "were relying on neighbors and even strangers to pick them up outside their homes after school and drive them to a community fitness center where people tried to keep them calm. But many kids could not stop crying for mom and dad."

As ProPublica reporter Dara Lind pointed out on Twitter, young children of immigrants have lived in constant fear of their parents being swept up at any moment by President Donald Trump's deportation force.

"I've spoken to school employees in cities where there were no raids," noted Lind, "saying that sometimes kids came in midday asking to call and see if parents were still home."

HAPPENING NOW: In Forrest, Mississippi where one of the #ICE raids happened nearby Children of those who were arres… https://t.co/5HFO33VIJm
— Alex Love (@Alex Love)1565225062.0

More images as volunteers try to feed the kids donated food and drinks for dinner tonight. But most children are st… https://t.co/Ezup9ei9T7
— Alex Love (@Alex Love)1565226865.0

In total, ICE agents carried out raids in six Mississippi cities, leaving outrage and despair in their wake. According to local news reports, workers suspected of being undocumented were rounded up, placed on buses, and sent to an ICE facility in Louisiana.

"Children finished their first day of school with no parents to go home to tonight," reported the Jackson Free Press. "Babies and toddlers remained at daycare with no guardian to pick them up. A child vainly searched a workplace parking lot for missing parents."

Buzzfeed reported the story of a woman named Dianne, whose fiancé was arrested in one of the raids on Wednesday.

On Wednesday morning, Dianne received an alarming call. It was her fiancé, dialing her from the chicken processing plant in a nearby central Mississippi town where he worked long shifts deboning meat.

"ICE is here!" he yelled. In the background, Dianne could hear other laborers terrified. The panic was palpable. One worker called out in Spanish, "Ayúdame! [Help me!]"

Dianne's fiancé, who came to the country more than two decades ago from Mexico without authorization, told her he had no way out and would not be able to escape immigration enforcement agents. His voice trembling, he told Dianne that she needed to make a promise before he got off the line: "Take care of my kids."

"I'm calling upon faith institutions in our community to become sanctuaries for our immigrant neighbors and protect them from potential harm," Lumumba said. "The City of Jackson strongly objects to the Trump administration's ICE raids."

At a Mississippi school, the children and family members of immigrants plucked out of their workplaces by federal a… https://t.co/PnpMOSXqdu
— Ashton Pittman (@Ashton Pittman)1565221911.0

Greisa Martínez Rosas, deputy executive director of rights group United We Dream, called the massive raids "an act of terrorism" against immigrant communities and said the "effect of ripping children from their parents at the border or stealing parents away from their children in Mississippi is the same."

"Just days after the El Paso massacre where a gun wielding maniac parroted Trump's anti-immigrant hate, a battalion of ICE agents abducted 680 Latinx and immigrant men and women on Trump's orders," tweeted Rosas. "For anyone who tries to desensitize the situation or blur the connections between the acts of terror this week I call bullshit. Latinx and immigrant kids and families have been terrorized this week."

"It is time for both parties in Congress to stop giving ICE and [Customs and Border Protection] billions of dollars and to hold them accountable," Rosas said. "ICE and CBP are the armed, taxpayer funded extension of Trump's anti-immigrant hate and must be stopped."