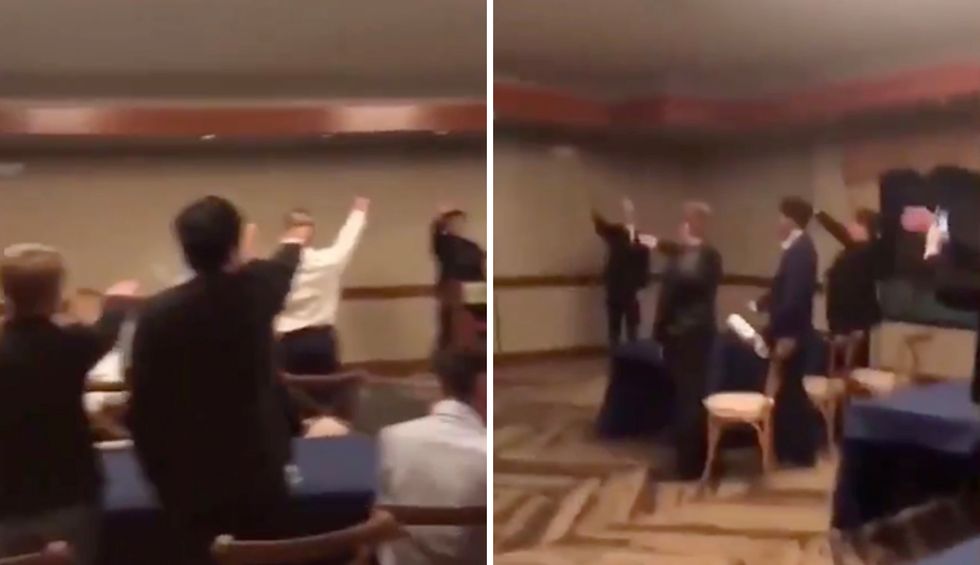 A short video (below) has surfaced showing about ten California high school students singing what one expert calls an “obscure” Nazi song while giving a Hitler salute.

The students, part of Garden Grove, California’s Pacifica High School water polo team can be seen “throwing the salute once used to greet Adolf Hitler while singing a Nazi marching song played for German troops during World War II,” according to The Daily Beast.

The video reportedly was posted to Instagram, along with the words to the song.

Chapman University professor Peter Simi, an expert on extremism, noted the song is so obscure that he wonders how the students even came to know it – raising bigger questions.

“It’s not something you’d expect somebody to accidentally know about. There’s some means by which they acquired knowledge about the song and associated Nazi issues,” Simi told The Daily Beast. “Are they on websites or web forums or other social media platforms where they’re engaging with others informed on these issues?”

Meanwhile, the school is refusing to say what, if any, disciplinary action was taken against the students. And some parents and others are concerned that the school, which will only say it addressed the matter with the students, did not address it with the entire school, since many may have seen it.

Also disturbing, The Daily Beast observes, this is the second recent incident of “Nazi portrayals” by students in Southern California, leading many to wonder what is going on.

A group of high-school athletes in Southern California reportedly gave a Nazi salute and sang a Nazi song during an… https://t.co/ssOrcQGDiN
— The Daily Beast (@The Daily Beast) 1566219601.0

At least one person took to Twitter to blast the school for not taking the issue seriously enough and for not understanding the broad repercussions of the students’ actions, and its apparent lack of action, based on the statement it released:

This is an INSANE response from Pacifica High School. Do they not understand that this shit leads to domestic terro… https://t.co/neEGkfPEGr
— Brosephine Wires (@Brosephine Wires) 1566218128.0