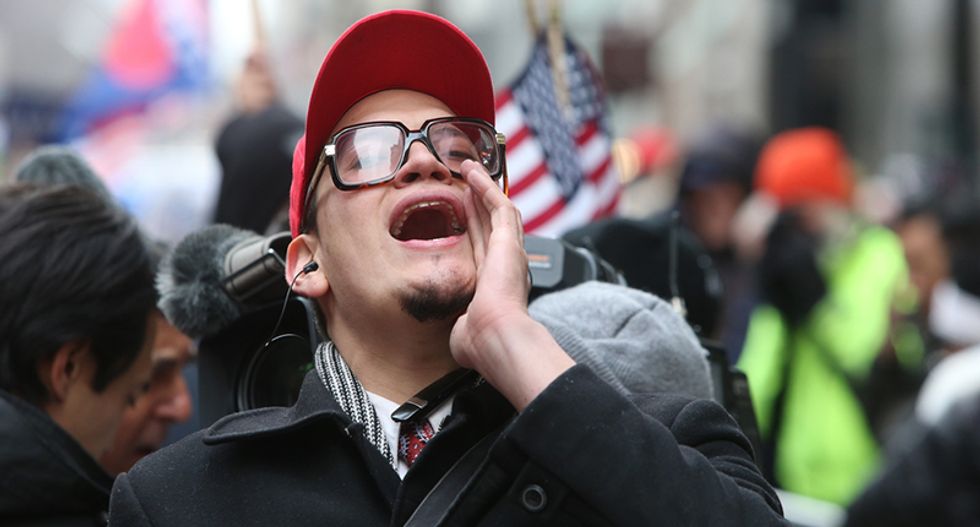 Among far-right conspiracy theorists who read Breitbart News religiously and faithfully listen to “The Alex Jones Show,” one often hears the term “deep state.” But long-time federal  government worker Chuck Park believes that in the Trump era, the United States has a different problem: the “complacent state” — and the problem is so bad, according to Park, that he is leaving his position in the U.S. Foreign Service Department after many years.

The “complacent state,” Park asserts in an op-ed for the Washington Post, is one in which federal government employees are often appalled by President Donald Trump’s words and actions but remain silent because they want to keep their cushy jobs. Park laments that he had been part of the “complacent state,” often silently cringing because of Trump. But this week, following a white nationalist terrorist attack in El Paso, Texas that left 22 people dead, Park could be silent no more and announced his resignation.

“I’m ashamed of how long it took me to make this decision,” Park laments. “My excuse might be disappointing, if familiar to many of my colleagues: I let career perks silence my conscience. I let free housing, the countdown to a pension and the prestige of representing a powerful nation overseas distract me from ideals that once seemed so clear to me. I can’t do that anymore.”

In 2016, Park recalls, he watched as “a man who campaigned on racism, misogyny and wild conspiracy theories became president-elect.” And after Trump took office, Park adds, the president gave him many reasons to cringe.

“I have seen Trump assert the moral equivalence of violent white nationalists and those who oppose them, denigrate immigrants from ‘shithole countries’ and separate children from their parents at the border only to place them in squalid detention centers,” Park asserts. “But almost three years since his election, what I have not seen is organized resistance from within.”

Instead, Park writes, the “complacent state” goes along to get along.

“The complacent state sighs when the president blocks travel by Muslim immigrants, shakes its head when he defends Saudi Crown Prince Mohammed bin Salman, averts its gaze from images of children in detention camps,” Park explains. “Then, it complies with orders.”

Park concludes his op-ed by describing the terrorist attack in El Paso, where his seven-year-old son was born, as the straw that broke the camel’s back —  inspiring him to finally resign from the Foreign Service Department.

Park’s son, he writes, was born “in the same city where 22 people were just killed by a gunman whose purported ‘manifesto’ echoed the inflammatory language of our president…. I can no longer justify to him, or to myself, my complicity in the actions of this administration. That’s why I choose to resign.”