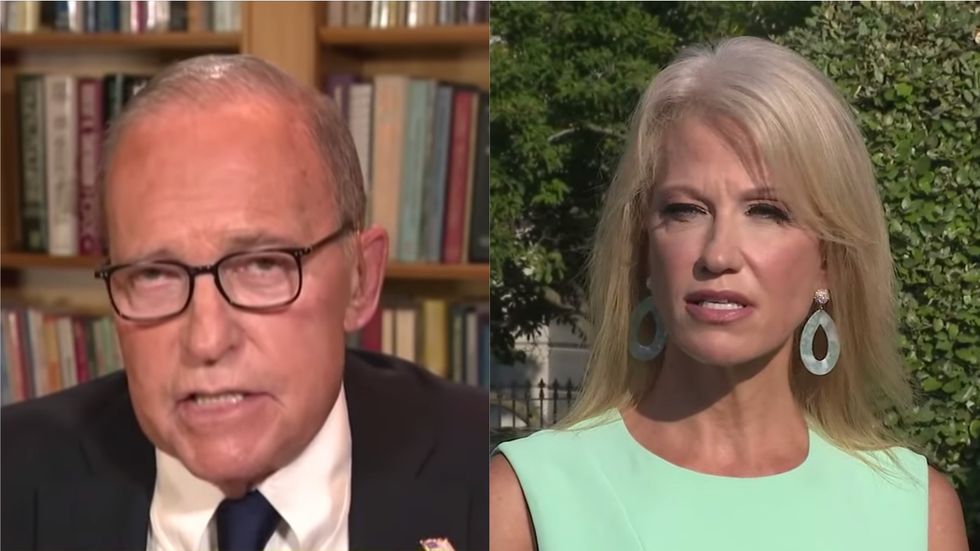 As economists and financial analysts sound the alarm that the risks of a recession rising, President Donald Trump and his advisers have their fingers in their ears.

It's far from guaranteed that we're headed for a recession, of course, but the administration's obliviousness to the warning signs may actually increase the danger. If the economy does start to falter, it seems there's no plan in place to halt the decline. And perhaps most disturbing of all for those of us who remember the 2008 crash, Trump's top aides are echoing the empty reassurances delivered under President George W. Bush in 2007.

Kellyanne Conway, counselor to the president and a prominent spokesperson for the White House, even mirrored Bush and John McCain's own phrasing Monday morning when questioned by the press about the risk of a recession.

"The fact is, the fundamentals of our economy are very strong," Conway said.

In December 2007, before the worst of the crisis, Bush said similarly: “The basics in the economy are good.”

Then in September 2008, with the financial crisis revving up, then-presidential candidate McCain said: "The fundamentals of our economy are strong," though he added: "but these are very, very difficult times." The crisis would worsen into 2009, becoming one of the key struggles President Barack Obama faced in office.

And it's not just Conway reminding us of a previous Republican Party's overly rosy attitude in the face of recession. Director of the National Economic Council Larry Kudlow is also echoing failed predictions — his own.

"I don't see a recession at all," Kudlow said Sunday when asked about the prospect Sunday on Fox News.

This sounds a lot like Larry Kudlow in 2007 who, just days after Bush's "basics" comment, wrote a piece for the National Review headlined: "Bush Boom Continues."

Its opening paragraph is a classic in humiliating predictions history:

There is no recession. Despite all the doom and gloom from the economic pessimistas, the resilient U.S economy continues moving ahead “‘quarter after quarter, year after year'” defying dire forecasts and delivering positive growth. In fact, we are about to enter the seventh consecutive year of the Bush boom.

It was a terrible prediction, and many people pointed out Kudlow's dismal performance as an oracle when Trump picked him. Since joining Trump's team, his embarrassing track record of failed predictions has continued unabated. The Washington Post's Aaron Blake pointed out Monday that Kudlow predicted a falling deficit in 2018, that the tax cut would bring annual growth up to between 3 and 4 percent, and that growth could even briefly hit 5 percent. Each one of those predictions turned out to be wrong — as any credible economist could have told Kudlow when he made them.

The Trump administration has become known for its constant and unrepentant lying, showing a lack of interest in reality. If its predictions about the future prove just as fantastical as its claims about the present and future, the country may really be in for a rough road ahead.