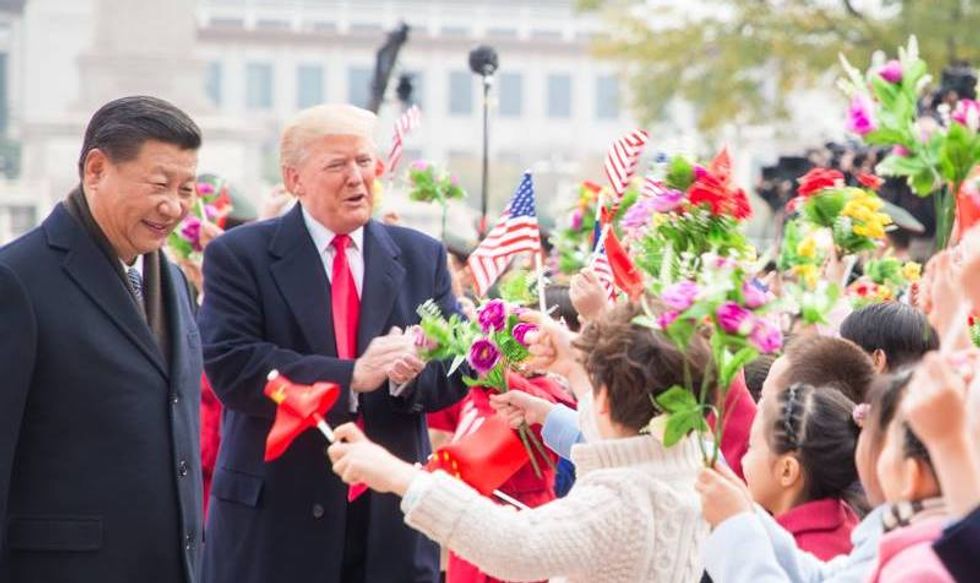 Tensions continue to rise in Hong Kong as massive groups of pro-democracy protesters shut down an airport on Tuesday. The protesters have clashed with police while demonstrating against the Chinese government's attempt to exert greater control over the quasi-independent region through an extradition law. Meanwhile, the Chinese government is saber-rattling over the protests and gathering military forces nearby in an apparent threat to extend greater authoritarian force.

It's a fraught, complex and volatile situation demanding the world's attention and, one might hope, the deft and strategic moral leadership of the United States government. Instead, of course, we have President Donald Trump.

Asked a few weeks ago if he supported the rights of protesters in Hong Kong, he gave a vague an unimpressive answer: “Well they are [protesting]. I don’t think China’s stopped them. China could stop them if they wanted. I’m not involved in it very much. I think President Xi of China has acted responsibly, very responsibly. They’ve been out there protesting for a long time. I’ve never seen protests like it where you have that many people, it looks like 2 million people. Those are big protests. But I hope that President Xi will do the right thing, but it has been going on for a long time there’s no question.”

He later called the protests "riots" — a contentious description with potential legal consequences in Hong Kong – and said, “Hong Kong is a part of China, they’ll have to deal with that themselves.”

On Tuesday, he tweeted:

While it's not clear why Trump would be to blame, precisely, for the crisis in Hong Kong, it's undoubtedly true that his rhetoric and posture as president has served to empower autocrats abroad. He frequently praises and embraces autocratic regimes while denigrating democratic allies, and under his watch, concern for human rights abroad has fallen off the American agenda.

And amid the chaos, an old quote from a Playboy interview with Trump in 1990 reveals his true disposition toward Chinese autocracy:

What were your other impressions of the Soviet Union?I was very unimpressed. Their system is a disaster. What you will see there soon is a revolution; the signs are all there with the demonstrations and picketing. Russia is out of control and the leadership knows it. That's my problem with Gorbachev. Not a firm enough hand.

You mean firm hand as in China?

When the students poured into Tiananmen Square, the Chinese government almost blew it. Then they were vicious, they were horrible, but they put it down with strength. That shows you the power of strength. Our country is right now perceived as weak ... as being spit on by the rest of the world—

He has consistently signaled to the world that he views violent and oppressive governance as the strongest form of leadership. Thankfully, so far, American institutions have greatly limited his ability to enact his preferred form of government here. But he has no interest in crafting a foreign policy that increases the chances that other countries will respect human rights.