Trump’s ignorance has touched off a new crisis in Kashmir 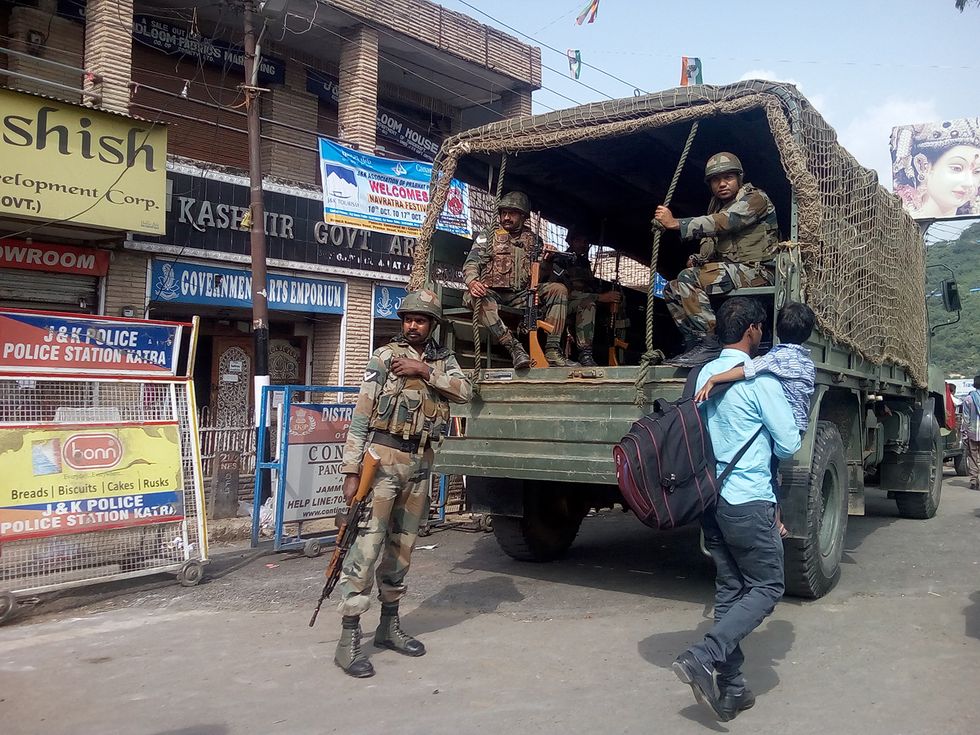 South Asia is again in crisis and could be on the brink of war. For the second time in six months, the world is on tenterhooks, waiting to see what turn events will take. Because the two antagonists are armed with nuclear weapons, the possibility of a confrontation is taken seriously. And as has happened before, Kashmir is at the center of the dispute that has kept India and Pakistan at loggerheads for over 70 years.

The simmering cauldron came to a boil about 10 days ago, when Indian Prime Minister Narendra Modi, flush after a landslide electoral victory, revoked Article 370 of the Indian constitution, which established special status of the disputed territory. As expected, public reaction has been strong. In a bid to control the situation, the government has imposed a curfew and a clampdown on communications, cutting off the Kashmiris from the outside world.

A war of words has begun. In his Independence Day message, while expressing solidarity with the people of Indian-occupied Kashmir, Pakistan’s army chief Qamar Javed Bajwa promised to stand by them to counter India’s “hegemonic ambitions.” “There can never be a compromise on Kashmir,” he affirmed.

The civilian leadership in Pakistan has joined in, and public opinion is united behind the Kashmiris. But it is Bajwa’s voice that will carry the most weight, as he alone will decide between war and peace.

How did matters reach a head? Observers believe that Donald Trump’s ham-handedness has provoked Modi—or rather, provided him the opening he was looking for. American presidents from Eisenhower to Obama have followed a rule of thumb in their dealings with South Asia that has paid off: They have maintained a steady balance in their relationship with India and Pakistan. The superpower has intervened in the affairs of the region only when invited by both countries to mediate or in times of crisis, when war appeared imminent.

Another rule the U.S. has observed is to resort to diplomacy on the quiet when needed. This has enabled Washington to operate on its own terms in the region without upsetting the apple cart and retain a measure of influence on the two regional powers.

Last month, these rules were thrown to the wind. Trump, with his “big ego, a mouth to match and oblivious to history,” decided that he knew best. He believes he has tamed Pakistan, the devious ally in the region on whose cooperation America’s troop pull-out from Afghanistan depends. By cutting off aid to Islamabad last year and getting the International Monetary Fund to dillydally on a much-needed bailout to Pakistan, Trump managed to have his way. The Pakistan army came on board to persuade the Taliban to enter into talks with Zalmay Khalilzad, the special U.S. representative on Afghanistan. That was how the Doha talks were launched and have reached their critical eighth round.

These developments no doubt convinced Trump that his strategy will work. He told the media, “The problem was [that] Pakistan wasn’t doing anything for us. They were subversive. To be honest, I think we have a better relationship with Pakistan right now than when we were paying that money. That money can come back.”

Earlier, an India-Pakistan crisis in February had brought the two countries to blows. The crisis was defused when Pakistan returned a captured Indian pilot as a “peace gesture” after the U.S., along with Russia and the U.K., intervened, calling for restraint. Confident of diplomatic success, Trump, it seems, was primed for a meeting with Pakistani Prime Minister Imran Khan in July.

But what went wrong this time? It was smooth sailing with Khan at the Oval Office. He received an aid package of $1 billion, as well as a bonus at the press conference the next day—a positive response to Khan’s request for mediation on Kashmir. Without realizing it, Trump had touched India’s raw nerve. Khan, of course, was delighted, because that is what Islamabad has been demanding for ages. For India even to suggest such a move amounts to a slap on its face, as it is the pro-status quo party. The Simla Agreement it signed with Pakistan in 1972 after their third war clearly stated that the two countries would settle their differences by peaceful means through bilateral negotiations or by any other peaceful means mutually agreed upon between them. Being the smaller state and unable to badger its bigger adversary, Pakistan’s policy has been to internationalize the dispute.

Given his aversion to history, Trump would not have known about these sensitivities or, for that matter, the fact that Kashmir is a historical legacy of the hasty and clumsy partition of India by the British in 1947. It has been on the U.N. Assembly’s list of unresolved disputes since 1949. A Muslim-majority princely state, it was ruled by a Hindu Maharaja who invited the Indian Army to facilitate his accession to New Delhi in 1947. Initially both parties agreed to the UN Security Council’s resolution suggesting that a plebiscite be held in the state to allow the Kashmiris to decide their future. This never took place. For the last 20 years, an insurgency in the Kashmir Valley has become a major security headache for New Delhi, which has accused Islamabad of infiltrating militant groups into the territory under Indian control in order to destabilize it. Pakistan is known to have used nonstate actors as strategic assets, but this does not detract from the fact that the Kashmiris—even many who once accepted Indian suzerainty over them—are now angry and in revolt. As a result, they have suffered brutality and human rights violations at the hands of the Kashmiri police and the Indian army.

What is surprising is that Trump claimed that Modi requested him to be a mediator/arbitrator in Kashmir. India denied this, immediately and categorically.

But not to be deterred, 10 days later, on Aug. 2, Trump repeated his mediation offer. This was another insult to Modi. His message to the American president had to be driven home fast. Trump had to be told, in no uncertain terms, to keep his hands off the disputed territory that India has been claiming as its own. A Hindu nationalist who shrugged off a massacre that took over 2,000 lives in the Indian state of Gujarat in 2002 under his stewardship, Modi could not be expected to care for Kashmiri lives.

One can assume that, to Modi’s mind, what could create a better impact than a scheme he had been planning for years but never got down to implementing? Get rid of Article 370 and integrate Kashmir fully into India.

This actually worked. On Monday, a week later, the Indian ambassador in Washington announced that Trump had declared that mediation offer was no longer on the table and that he had reverted to the longstanding policy of treating Kashmir as a bilateral issue between India and Pakistan.

In the aftermath, we are left with an ugly situation in South Asia. On the one hand, Pakistan, which is emotionally and strategically tied to Kashmir, has once again demonstrated its helplessness in winning justice for the Kashmiris, whose cause it has championed for long. Although it has asked for an emergency session of the UN Security Council, it may not succeed in getting one convened. Prime Minister Khan’s statement “questioning once again the international community’s silence on Indian-occupied Kashmir” reflects his frustration. Modi, on the other hand, is gloating about his move and has described it as an act that  “would restore the region to its past glory” and said “Kashmir will play an “important role” in India’s development.” In tit-for-tat firing across the line of control in Kashmir, eight soldiers — three Pakistani and five Indian — have been killed in a day.

With all attention focused on Kashmir, the Qatar talks on Afghanistan have slipped from public memory. The eighth round of the Doha talks has been adjourned without any clear-cut announcement being made. The reports are conflicting. Some say the interlocuters are consulting their bosses. Others say they are deadlocked on the two ticklish items on the agenda: the ceasefire and withdrawal schedule and the intra-Afghan talks that will determine the future political structure of the country. So far, the Taliban have been adamant in their refusal to meet Afghanistan President Ashraf Ghani, dubbing him an American stooge. Without an agreement on these issues, Afghanistan’s future is uncertain, as the Taliban would likely seize control as soon as U.S. forces withdraw. The 2,400 American lives lost in 18 years of fighting and the $900 billion spent would all be in vain.

Can’t Pakistan help any more? One cannot say. With Kashmir in such a mess, would Pakistan want to push the Taliban any further? Does Pakistan’s Inter-Service Intelligence agency really have a hold on the Taliban anymore? Remember that the Frankensteins created by such agencies often go out of control. In that case, will Trump win the election next year?

This and all the other questions about world peace can well be asked, just because Trump didn’t know.